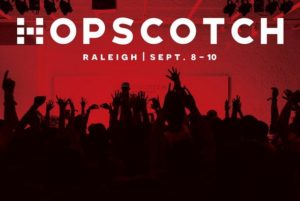 Jasper asked Free Times music editor emeritus, Those Lavender Whales guitarist, and Hopscotch veteran Patrick Wall to go the festival and gives us his thoughts. This, in three parts, is what he wrote.

I was in the middle of City Plaza when it hit me.

I’d honestly been sort of dreading going to Hopscotch this year. Each year, for the past six years, I’ve trekked up to Raleigh for the three-day, indoor-outdoor music festival. And though each year has been ultimately rewarding or affirming — and sometimes both — each year the slog’s gotten longer, tougher, more exhausting.

I still remember my first Hopscotch. In part, anyway: It was 2010; I was in my mid-twenties, going to shows seemingly every night of the week, and running a music desk at an alt-weekly newspaper but more or less drinking professionally. My first few Hopscotches went the same way: Get to Raleigh, start drinking, see as many bands as possible, don’t stop doing either until the wee hours of Sunday morning. It was a herculean effort, one fueled by surges of adrenaline as much as it is by boatloads of caffeine. Rest and food were scarce; calories were consumed in quick chugs and at late-night diners. Success was only achievable through assembling a crew to spur you into hopping to another venue, pick you up when you fell, hand you another five-hour energy drink when you tired.

Things changed in the intervening six years. Hopscotch got bigger, more popular and more populist — and more overrun, it seems, by sponsorship representatives handing out Kind bars and herbal energy drinks. As for me, I quit the alt-weekly desk, freelanced for a few years, then burned out and got a real job. I’ve moved twice. I’ve gotten married. I gained 25 pounds, then lost 40. I’ve quit writing professionally almost entirely. I’ve forgone, even, going to a lot of shows, part and parcel because a lot of what comes through where I live now doesn’t fully grab my interest, but mostly in favor of gathering moss. Instead of slumming in dive bars and seeing yet another in a line of bands who wouldn’t make the minutest impression on me, I dove into other interests: playing hockey and trying to get under a 10-minute mile and going fun and interesting places with my wife and doing any number of things I’m interested in doing that don’t involve popping in earplugs and popping open a PBR. I chalked it up as a consequence of getting older, crankier, less indefatigable.

My friends who’d formed my Hopscotch crew, too, were passing on attending en masse, having chosen on hiking excursions or having moved to bigger cities or having settled into married life or having simply grown weary of the rigors of the Hopscotch wringer. I’d even considered not going to Hopscotch at all. After all, I was in my mid-thirties, and years removed from the ride-or-die rock ‘n’ roll lifer I always thought I’d always be. Was this shit even for me anymore?

I confessed to a friend of mine over a drink at a Raleigh bar some two months before Hopscotch that I was considering not going. She laughed, rolled her eyes, stirred her drink and said, “Of course you’re fucking going.”

She was right, and there I was, the intoxicating pull of Hopscotch — not to mention the opportunity to see some longtime favorites for free — having proved once again to great to pass up. (I suppose I remembered my Nietzsche: Without music, life would be a mistake.) I’d gotten to City Plaza late after sitting in rush hour traffic outside of Raleigh — not too late, thankfully, to not see Wye Oak reaffirm themselves as an incredible live act — and was starving. Six years ago, I’d have thrown caution to the wind, sniffed out the free booze and played catch-up with the cadre of Hopscotch partiers who’d been drinking all day.

Instead, I slid into the small health-food joint at the top end of City Plaza, ordered something called the Protein Bowl, halved the order of chicken — because, you know, cholesterol — and hoofed it back outside, where I started shoveling it into my mouth in hefty forkfuls. Standing in line for the photo pit, I looked up from my meal and laughed. I, who somehow survived a diet of cheeseburgers and whiskey and innumerable shows in my twenties, was eating a salad standing up. At Hopscotch.

And that’s when it hit me. I wondered aloud — Which has changed more: Hopscotch, or me? 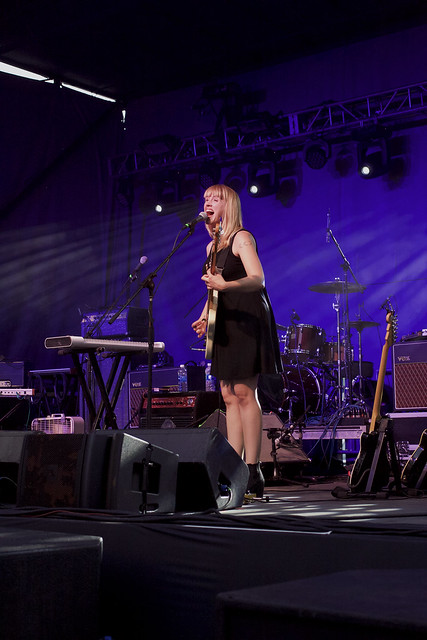 Around midnight on Thursday, I sank into a plush padded chair at the comfy Fletcher Opera House just as Kurt Wagner’s long-running, essential and forever exquisite indie rock band Lambchop was easing into an imaginative trio rendition of “The Hustle,” the first single from its upcoming album.

“Do the hustle,” Wagner intoned, mantra-like, in his AutoTuned baritone near the end of the song’s extended runtime. ”Do the hustle.”

Stylistic pinball has always been the prevailing spirit of Hopscotch. The festival’s breadth has always been remarkable: Its first year featured headlining sets from Public Enemy and Panda Bear and its downticket club lineups featured everything from the rawest garage rock to the raunchiest rap to the most refined experimental music, and it’s followed that model since. Hopscotch works on the pub crawl model: See a bit here, a bit there, a bit somewhere else. But such an approach requires hustle; to see a dozen bands and at least half as many genres in a single night requires hurried rambles around downtown Raleigh at maximum efficiency. (The smartest thing I’ve ever done: brought my bike to Hopscotch. One of the dumbest: neglecting to bring a spare tire, or at least a patch kit.) Hopscotch doesn’t require you to pachinko your way through the night, but the way its schedule is staggered encourages quick and unlikely moves.

I spent my first few Hopscotches accumulating sets like baseball cards, ticking off boxes and circling names on pocket-sized schedules. The intent was willful, deliberate sensory overload — to see as many bands in three days as possible. Those first few years, I averaged more than 50 over the course of three days; at my most active, I saw 61. (And, because I’m an insane person, documented each sighting on Twitter and Instagram.) I wondered, after that exhausting year, if seeing 100 bands was possible, even plausible. I drew charts and started mapping efficient routes. Such an idea is utterly fucking ludicrous to me now.

The flaw in my methodology was my limited random access memory. I wrote, for the now-defunct Shuffle magazine in 2011, when — subsisting solely on adrenaline and consuming nothing but coffee and alcohol — I saw 61 bands, that I’d remember not certain sets but certain moments. But the truth is I don’t really remember either, at least not without considerable prompting. Last year, by comparison, I hit 52 bands without breaking a sweat. This year, I saw even fewer 49. (And I only tweeted 14 times.)

All this is to say I didn’t so much follow Wagner’s advice this year. I saw the fewest number of bands at the Hopscotch since the first one. I hustled less, stayed put longer — even caught entire sets from non-City Plaza headliners. (It’s easy to catch a full set from a City Plaza act, as they’re typically slotted in the dead time between the end of the day parties and beginning of the club shows.) I decided to stick around longer for things I was enjoying. I worried less about festival FOMO. (I will now set myself on fire for using FOMO.)

But if Hopscotch is a lot more sane, is it by turns a lot less fun?

There was still plenty of pivoting to be done. In Nash Hall, I surrendered to the exquisite and emotionally provocative avant-garde saxophone quartet Battle Trance, which sounded at times like a blistering death metal band through hyperprecise scalar runs and moments later whistling — literally — in harmony. During their 45-minute set, they employed probably every extended saxophone technique invented, moves that were at once whimsical and magnetic. Nash Hall, a low-ceilinged, intimate space in a downtown church, was a new and much welcomed Hopscotch venue this year, giving the festival a place where reverence is assumed and attention is high; I’d return near the end of my night for Tom Carter’s glacial guitar drones.

Down on Fayetteville Street, Memorial Auditorium returned to use after a two-year absence due to venue remodeling and festival reformatting — it served as a venue for what could be thought of as overarching club headliners. If its first night back was a test run, it stumbled: Sneakers, a small but quietly influential ’70s North Carolina power-pop band whose ranks included Mitch Easter and Chris Stamey, sounded stiff in the outsized auditorium; vaunted indie-rock forefathers Television deployed their trademark guitar heroics, but never caught fire.

But when a set is disappointing at Hopscotch, chances are very good there’s one right next door that’s hitting on all cylinders. Lambchop smoldered perfectly at Fletcher Opera House. Kitty corner at Lincoln Theatre, Mutoid Man and Converge perfectly mixed power and majesty.

The first night of Hopscotch, then, was a classic example of the festival’s longtime format — a big opening show outdoors followed by a mad, prolonged dash between ten clubs of various sizes for several hours — and why that formula remains potent. No other festival promises attendees so many permutations to choose from. But with such diversity comes the paralyzing problem of choice. Moreover, this very approach, which has made Hopscotch so appealing over the years, now threatens to bring it more in line with generalist festivals across the country.

Patrick Wall is music editor emeritus of Free Times. He now lives in Winston-Salem, North Carolina, where sometimes people pay him to write things. He is carbon-based.

What Jasper Said is the blogging arm of Jasper – The Word on Columbia Arts, a new written-word oriented arts magazine that serves artists and arts lovers in the Columbia, SC area and its environs in four ways: Via Print Media – Jasper is a bi-monthly magazine, releasing in print six times per year in September, November, January, March, May & July, on the 15th of each month. Jasper covers the latest in theatre and dance, visual arts, literary arts, music, and film as well as arts events and happenings; Via Website – Jasper is an interactive website complete with a visual arts gallery, messages from Jasper, an arts events calendar that is updated several times daily, bite-sized stories on arts events, guest editorials, local music, dance & theatre videos, community surveys, and more; Via Blog – What Jasper Said -- you're reading this now -- is a daily blog featuring a rotating schedule of bloggers from the Jasper staff as well as guest bloggers from throughout the arts community; Via Twitter – Jasper Advises is a method of updating the arts community on arts events, as they happen, with more than a half dozen active tweeters who live, work, and play inside the arts community everyday ~ Jasper Advises keeps the arts community abreast of what not to miss, what is happening when it is happening, and where to be to experience it first hand.
View all posts by Jasper →
This entry was posted in General and tagged converge, hopscotch, kurt wagner, lambchop, mutoid man, pat wall, patrick wall. Bookmark the permalink.