I was trying something different.

I am a “fan”… of art, music, film and generally anything you might consider “nerd” culture. I use this to deconstruct my own identity, masculine persona and cultural expectations of masculinity in hopes it will take me out of my comfort zone and keep me from doing the same thing over and over. The approach provides a launching pad for my ideas to develop and change while tackling new projects, which keeps my studio practice fresh and unpredictable.

This process is what drove me to enter the 2nd Act Film Festival this year. I needed to push my practice in a new direction and engage a different audience within the context of film culture. In past years the 2nd Act Film Festival has produced some amazing films by a talented set of filmmakers. Honestly, I had no expectation of getting in, since I was coming from an art making background. Although I tell stories in my art, I use a different approach that incorporates the manipulation of objects, image and space. I tend to allow the subject matter and materials to dictate what the final embodiment becomes, without considering constraints like length, cast and crew. So, when I received notification that I was chosen as one of the ten filmmakers I was in uncharted territory.

Before receiving the Artistic obstructions I considered a setting for this story. I wanted to use objects and locations that contained their own character and could hold up against another person’s actions. I also used my Dad’s recently sold elevator business to document the existence of a life long endeavor while allowing it to take on a life of it’s own in the film. This opened up the possibility to explore my relationship with my father in an unexpected way. 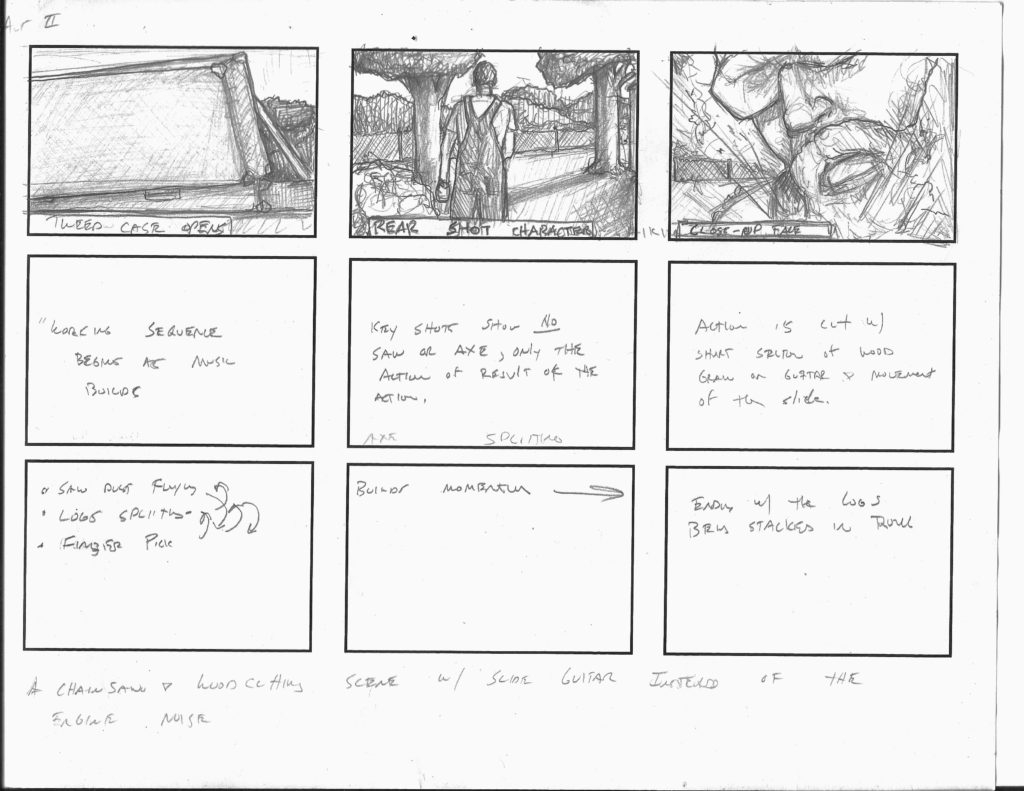 These lines of thought lead me back some music I wrote. It was a song that told a story that turned into an instrumental that bounced back and forth between different configurations within the same chord structure. In sections it reminded me of an engine or even crying. This birthed the idea of the guitar creating the atmosphere and dialogue in the film. As it started to become a lead character in the film I wondered how it would fit into the final film. I knew I could borrow from Jim Jarmusch, especially since I am a fan of his film “Deadman”.

When I received the script perimeters I labored to write the script. I could see the film in my head, but putting it down on paper was forced and didn’t flow with the images I was seeing in my head. I turned to what was familiar, drawing. I storyboarded the whole film, which fleshed out the entire narrative sequence. Then the script basically wrote itself. This in turned was used informed the cast and crew. The storyboards were a perfect tool to use to direct, without having to be behind the camera.

I have always been the sole contributor in the video based projects I have created over the years. With the exception of using my brother or other friends as camerapersons, I have rarely depended anyone else. Jasper’s film editor Wade Sellers suggested that I talk to other artists/ filmmakers who deal with similar issues in their work and have the same taste in films. He connected me with local artist Alex Smith. This was a true turning point in the development of the project. I sent Alex the storyboards and a few notes on what I was thinking about in terms of direction. When we met to talk about what he thought. The discussion sparked a friendship and provided a fresh take on how I could realize the vision I had on paper. One of the conversations brought to mind Pink Floyd’s song “Wish You Were Here.” It begins and ends in an old radio broadcast while the clean song plays throughout the middle. I wanted to attempt to incorporate that approach somehow. Little did I know the basis for the narrative would revolve around that concept. 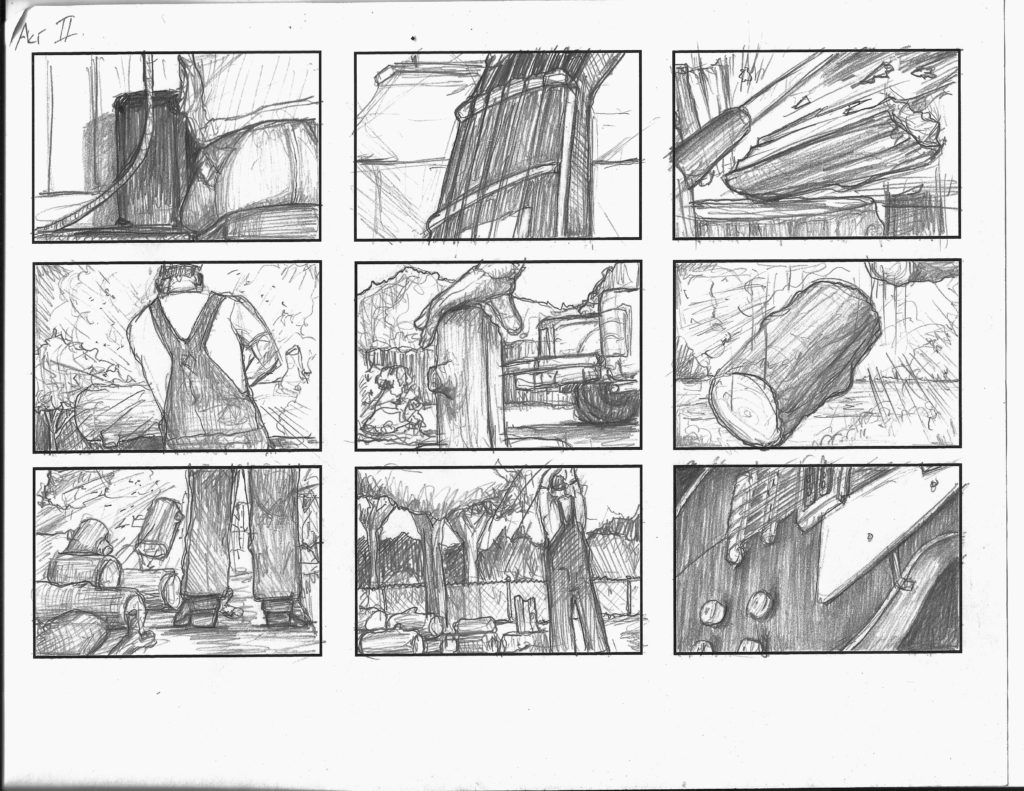 Once the shooting began I captured as much footage as possible. Since I was accustomed to shooting live performances or approaching a video shoot as a live performance and in this process I was accumulating footage over several days was foreign. I was used to a one shot deal and using only what I had from that one take of the action. During this experience I could shoot, reshoot and if I thought of a new idea I could create a whole new scene right on the spot. As the footage was uploaded I broke up the scenes into sequences that represented each act and I started to “sculpt” the shots to reflect the narrative in the storyboards.

As the different section of the film became finalized I recorded the music. Most of those recordings simply got scrapped or didn’t work, but I eventually began to hear the sounds that would be part of the film. As the final version started to emerge, the ability to react organically to the project faded away, I found myself in an uncomfortable position of having to make editing decisions that only contributed to the strength of the film. I felt like a surgeon with a scalpel carefully slicing the ends of flesh or a butcher just hacking away whole sections of meat that might taste good but weren’t right for the meal I was serving. 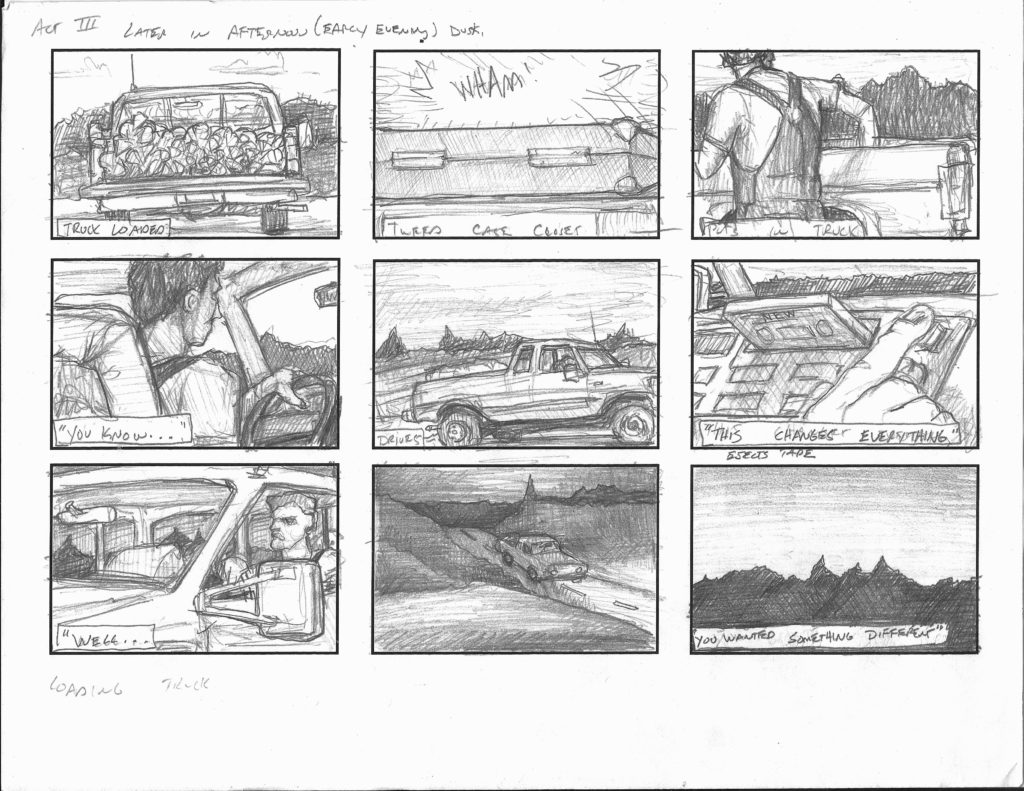 All of a sudden the deadline had arrived and the film was somehow finished. Hesitation and self-doubt crept in like a demon in the night. I reached out to friends and colleagues to help calm my nerves. I was scared to death. I wasn’t a filmmaker. I’m a sculptor. A performance artist.

The night of the screening arrived. I took a deep breath and walked in the door at Tapp’s.

You wanted something different. 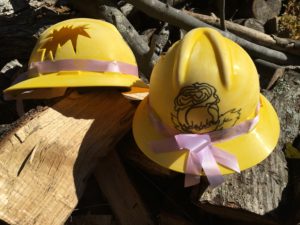 catch him in is a local artist creating multi-dimensional work (sculpture, performance, video installations and drawings) that rest on the conviction that art should generate an experience for the viewer which challenges them on a variety of sensory levels. His investigations are transformed into conflicts that engage the viewer on a visceral level. The encounters he creates exploit different stimuli to affect the viewer’s perceptions by using a combination of images, sound, smells or text to leave the viewers curious about what they are witnessing. In his first official endeavor into film making he attempted to balance his studio practice with the obstructions of creating a film. 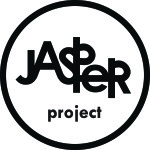 What Jasper Said is the blogging arm of Jasper – The Word on Columbia Arts, a new written-word oriented arts magazine that serves artists and arts lovers in the Columbia, SC area and its environs in four ways: Via Print Media – Jasper is a bi-monthly magazine, releasing in print six times per year in September, November, January, March, May & July, on the 15th of each month. Jasper covers the latest in theatre and dance, visual arts, literary arts, music, and film as well as arts events and happenings; Via Website – Jasper is an interactive website complete with a visual arts gallery, messages from Jasper, an arts events calendar that is updated several times daily, bite-sized stories on arts events, guest editorials, local music, dance & theatre videos, community surveys, and more; Via Blog – What Jasper Said -- you're reading this now -- is a daily blog featuring a rotating schedule of bloggers from the Jasper staff as well as guest bloggers from throughout the arts community; Via Twitter – Jasper Advises is a method of updating the arts community on arts events, as they happen, with more than a half dozen active tweeters who live, work, and play inside the arts community everyday ~ Jasper Advises keeps the arts community abreast of what not to miss, what is happening when it is happening, and where to be to experience it first hand.
View all posts by Jasper →
This entry was posted in General and tagged 2nd act film festival, jASPER pROJECT, Kendall Jason, Kendlprojects. Bookmark the permalink.