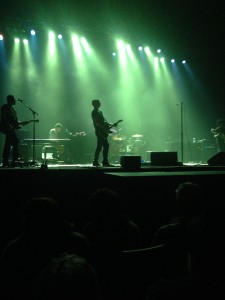 As much as I love live music, I kind of get why people can get down on going to rock shows. It can often be a frustrating experience—a din of guitars and drums played by musicians who look like they don’t even like to be on stage, and vocals either inarticulately delivered or buried under the instrumental barrage. Even if the music is good, sometimes the experience isn’t.

That was not the case this past Saturday at the Township Auditorium.

In a warm-sounding auditorium that has booked a slew of blues-inspired guitar slingers of late (Warren Haynes’ Gov’t Mule project played just a few days earlier, and the Tedeschi Trucks Band headlined in mid-January) Jonny Lang and Buddy Guy performed in the grand tradition of bluesmen who know what it means to put on a show.

Jonny Lang, more than 40 years Guy’s junior, rightfully opened up the evening. Lang has been a guitar protégé since his teens, releasing his smash debut Lie to Me at 16 and, following a stint in rehab in his early 20s and a slew of questionable releases in the aftermath of that experience, returned to form on last year’s Fight for My Soul release. Lang’s guitar chops were never in question as he roamed the front of the stage repeatedly to give everybody a taste of his lightning fast shredding, even if he still suffers a bit from the selection subpar material. More importantly, though, he probably won the crowd over even after the guitar-awe died down with the fact that, despite wreaking of the blues, Lang and his deep-grooving four piece backing band tend to end up more in soul and gospel territory than a standard 12 bar. He’s truly underrated a singer—there were moments where the band got quiet and he showed surprisingly nuance for music that can too often get a little blustery, even scatting a bit with a falsetto that I didn’t even know he had. Ill-fated Macklemore haircut aside, it was also nice to see that his performance style seemed entirely genuine. He spent most of the evening with his eyes closed in unswerving ecstasy, almost as if conjuring up whatever faint connection he had to the legion of blind bluesmen who paved the way for the kind of music Lang now makes. 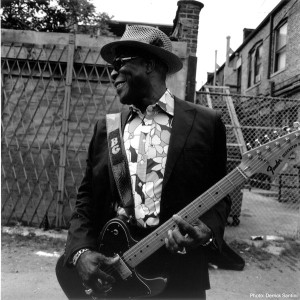 Following up Lang wouldn’t be easy for most, but I’m not sure if anybody has ever showed up Buddy Guy. At 77, I was a bit concerned that Guy’s prowess might have begun fading a bit, but I shouldn’t have been. With a remarkably similar line-up to Lang’s band, Guy delivered a set that not only demonstrated why he’s considered a primary influence on 60’s blues-guitar gods like Eric Clapton, Jeff Beck, and Jimi Hendrix, but also that his unique style of blending standard Chicago blues with noisier and more unpredictable elements is still fully intact. While he was in fine voice throughout the evening and seemed so comfortable in the role of bandleader and entertainer that his gravitas seemed to envelop the entire auditorium, it was some of his standard trademark tricks—playing long guitar solos while wandering deep into the crowd, suggestively (well, provocatively) playing his guitar with his, um, crotch area, and delivering up some ribald humor (“I came here tonight to play something so funky you can smell it!”) that were likely still the most memorable moments of the show. My only complaint is that the show ended a tad too soon for my tastes, and without Lang returning to the stage for some sort of collaboration. 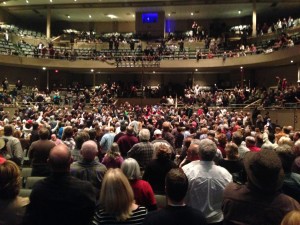 However, judging from the crowd’s mood upon leaving the venue, I can safely say that you should never pass on an opportunity to ever see these two performers if you can help it.  –Kyle Petersen