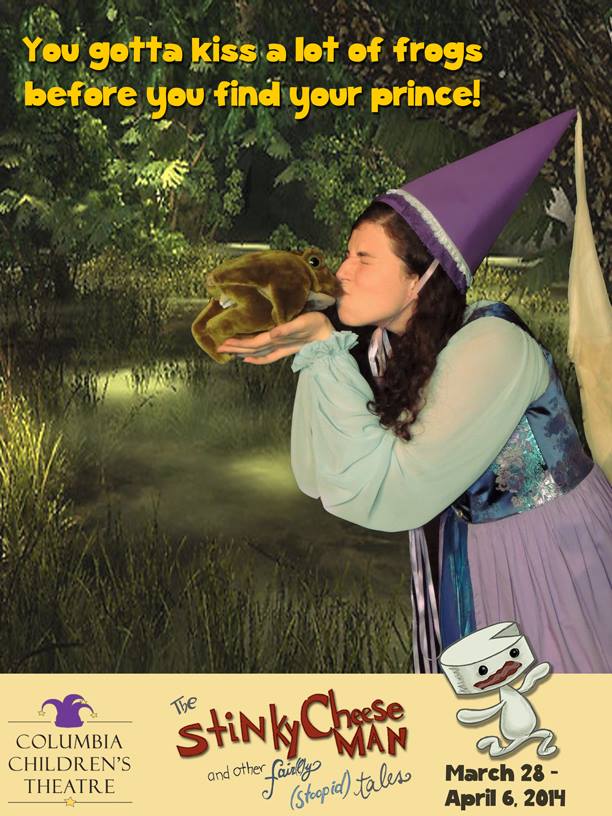 During my years as a drama teacher, I observed that students loved creating “fractured fairy tales” to perform. Taking a well-known story and turning it into something new, usually to humorous effect, was a guaranteed classroom success. Thus, it was a special treat to enjoy the current offering at Columbia Children’s Theatre and to savor audience reactions of surprise and delight. Directed by Jerry Stevenson, The Stinky Cheese Man and Other Fair(l)y (Stoopid) Tales provides the kind of high quality family production that audiences have come to anticipate from CCT. Adapted by Kent Stephens from the children’s book by Jon Scieszka, with music by Gary
Rue, Stinky Cheese Man offers a bright romp through classic stories told in unexpected and uproarious ways. In Scieszka’s Caldecott Honor book (with illustrations by Lane Smith), the title story spoofs the Gingerbread Man, “Cinderumplestiltskin” parodies those two enduring characters, and the “Really Ugly Duckling” becomes…well, check out this show to see (and laugh) for yourself.

The capable cast and crew members bring the comical tales to life with energy and wit. At the performance I attended, children were riveted by the engaging ensemble. B. Scott Vaughan as Jack (of beanstalk fame) guides the viewers through the theatrical experience. Vaughan’s inviting stage presence makes audience members feel like they are part of the journey.  Lee O. Smith creates a sly Foxy Loxy, whose mischievous interactions with Toni V. Moore’s vivacious Little Red Hen ignite lively shenanigans. Julian Deleon delivers a dynamic turn as the obnoxious stepmother to Evelyn Clary’s charming albeit detail-obsessed Cinderella. Elizabeth Stepp revs up the comedy as Rumplestiltskin and the frog princess, while Paul Lindley II becomes the marvelously boisterous and unforgettable Stinky Cheese Man himself. Not only does stage manager Crystal Aldamuy keep the action flowing offstage, she also joins in the hijinks onstage as a helpful Pinocchio.

Costume design choices by Stevenson and Donna Harvey evoke familiar characters with an inventive twist. In particular, the Stinky Cheese Man’s garb proves to be downright hilarious, producing roars of laughter from audience members. Stevenson and Jim Litzinger provide clean, reliable sound and lighting choices. Clever choreography by Aldamuy punctuates key moments, while Lindley’s valuable music direction drives effective vocal performances. Physical humor abounds in this production, with a fast forward/pause/play sequence sending my young daughter and her friend into fits of giggles. My kindergartener recommends, “Kids should come see this show because it is funny and silly!”

Rather than retread timeworn ground by retelling the same old yarns, these theatre artists aim to “change it, derange it, do anything but bore us.” And do they ever succeed: traditional characters embrace the Giant’s declaration of “fee fi fum fory” to make up “my own story.” Stinky Cheese Man imparts the delightful message that established narratives can be reinvented and infused with vibrant originality. By sharing this well-crafted production, CCT may inspire young audience members to create their own imaginative versions of well-known stories. Why stop at “once upon a time” when you can try “time upon a once”? 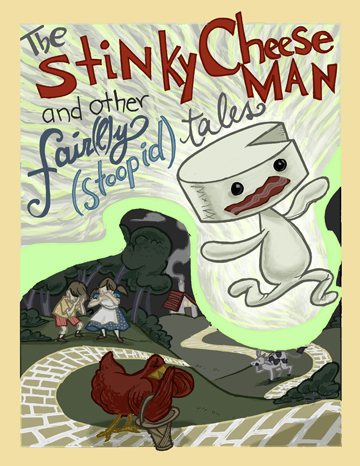 There are three more days to catch The Stinky Cheese Man and Other Fair(l)y (Stoopid) Tales: