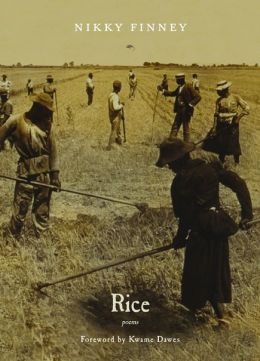 Nikky Finney’s Rice, originally published in 1995 but available in a new edition from TriQuarterly Books, is literature performing  the functions of oral culture: the transmission of stories, legends, warnings, and a sense of history and community. Finney’s topics are the lives and experiences of Black folks in coastal South Carolina, and Rice presents us with speakers from different eras, consistently giving a sense of a living voice, often speaking out of the past, but always with the urgency of the present. Some things are remembered for inspiration and strength, and others as cautions, as with the tale of a white doctor who drunkenly births a child with disastrous results in “The Afterbirth, 1931”:

And because he came with his papers in his pocket

after his Ivy graduation

asking us hadn’t we heard

telling us times had changed

and the midwife wasn’t safe anymore

even though we had all been caught

by tried and true Black grannies

who lay ax blade sharp side up

and placed the water pan underneath the bed

The poem’s ache is especially poignant because of the promise, represented by the doctor’s race and education, that this birth would be a step forward for the family, a hope that turns out to be naive: too much faith a white stranger’s accreditations, not enough trust in their own practices and perceptions:

loose on him from the start

and he would’ve held him up

and looked straight through him

and then he would have known first

and brought to us

the very map of his heart

then we would have known

just what his intentions were

It’s a hard-earned lesson, like much of what is contained in Rice, and Finney is determined to see that it isn’t forgotten. That poem and others in the book emphasize the combined knowledge of its characters, keenly aware of the role a community plays in sustaining its members. Establishing such a community is one function
Finney finds for poetry in Rice, and this feature of the book goes hand in hand with her skill in crafting language that feels authentic and spoken.  Poetry must serve this function, Finney’s book suggests, because Hollywood is unwilling or unable to:

Why can’t a story sell

less somebody kill molest mutilate me

or make my BabyDarling buffoon fall through a roof

she asks in “Pluck,” a poem that takes aim at narratives that present Black characters either as one-dimensional buffoons, or that reduce the horrors of slavery to melodrama and tawdry romance:

Slavery was no opera

was no historical moment

out of love for white men

The desire for representations of Blacks is strong, Finney acknowledges, but cautions against accepting portrayals that deny people their dignity, complexity, intelligence, or anger:

Sometimes when they know we are starving

they will throw stale bread

but don’t eat right then

refuse and reach for your heart   your liver   your lungs

This is the bad bread that Rice is offered as nourishing alternative to, the title crop coming to stand for the knowledge and skill of those that produced it. As a counter to popular media’s oversights, Rice offers accounts of real people, like FX Walker II, a mapmaker whose craft suggests a parallel to the poet’s, or Finney’s own grandfather, Ernest A. Finney Jr., first Black chief justice of the state of South Carolina, characterized in “He Never Had It Made” by his faith in hard work and the law:

He is the Justice Man

and from waiting tables as a young lawyer

for the white and the privileged

to this day here   he has always believed

back then as a boy with only a road

up here as a man who never looks back

While Rice is a deeply personal book, as the family photographs accompanying the poems make clear, it also situates the personal within a larger history, reminding us that personal history is already social, and that history is personal. If no one will testify to the sufferings and triumphs of real people, then those experience and their lessons may be erased. “Daguerre of Negras” speaks explicitly to these concerns, noting that “They will ask for your evidence / Might you have a photo?”:

They will tell you it never happened

Cause proof must be in a tin plate

And where pray tell is yours

In these poems, bodies themselves are stamped with history. “Making Foots,” which documents the mutilation of Black feet by fire, blunt force, blades, and disregard, concludes:

If your Black foot

ever wakes you up

wanting to talk about something

But while it’s a reminder of past injustices, and an acknowledgement that they continue in different forms, Rice is also a celebration of the community it evokes. What must be remembered are not only the indignities suffered in the past, but the dignity of those who suffered them. In his foreword, Kwame Dawes writes “What a poet like yourself does is to reinstate the concept of the poet as a griot—as priest, not void of subjectivity and a private self but able to contain the voices of the community—virtually empowered with the gift to develop a soul for the people” (x). Here, the many voices in Finney’s poems insist, I will tell my own story. And each voice is like the one in “A Woman with Keys”:

I am a woman with keys

Unlocking all the buildings

Finney has unlocked history for her speakers. Now they occupy history’s rooms, ready for their stories to be heard

What Jasper Said is the blogging arm of Jasper – The Word on Columbia Arts, a new written-word oriented arts magazine that serves artists and arts lovers in the Columbia, SC area and its environs in four ways: Via Print Media – Jasper is a bi-monthly magazine, releasing in print six times per year in September, November, January, March, May & July, on the 15th of each month. Jasper covers the latest in theatre and dance, visual arts, literary arts, music, and film as well as arts events and happenings; Via Website – Jasper is an interactive website complete with a visual arts gallery, messages from Jasper, an arts events calendar that is updated several times daily, bite-sized stories on arts events, guest editorials, local music, dance & theatre videos, community surveys, and more; Via Blog – What Jasper Said -- you're reading this now -- is a daily blog featuring a rotating schedule of bloggers from the Jasper staff as well as guest bloggers from throughout the arts community; Via Twitter – Jasper Advises is a method of updating the arts community on arts events, as they happen, with more than a half dozen active tweeters who live, work, and play inside the arts community everyday ~ Jasper Advises keeps the arts community abreast of what not to miss, what is happening when it is happening, and where to be to experience it first hand.
View all posts by Jasper →
This entry was posted in General and tagged Jasper, Jasper Magazine, Jonathan Butler, Nikky Finney, Triquarterly Books. Bookmark the permalink.