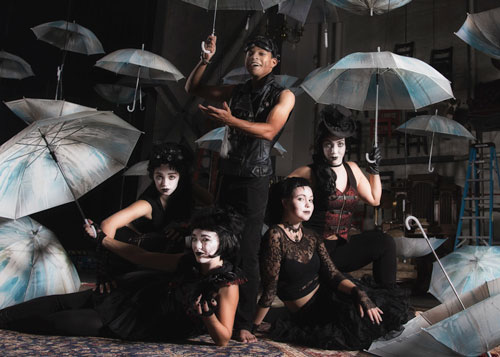 There’s a reason A Midsummer Night’s Dream ranks as one of the most oft-performed of Shakespeare’s plays—it is, quite simply, fun.

The plot is familiar to many if not most casual theatregoers or folks who actually did their reading in intro Brit Lit classes in college—a comical quartet of lovers both paired and unrequited dash into an enchanted forest full of fairies for an evening, and hijinks ensue. Because it’s a Shakespearean comedy and not a tragedy, all is well at the end, people get married, and a ridiculous play within a play is staged.

For all his breathtaking inventiveness, the Bard loved to return to what works well, hence the many frequent plot devices that appear here, like the use of mistaken identities, romantic comedy of errors or the role of mischievous interlopers, but it’s hardly a bother. It’s such an extraordinarily well-written play, full of his signature lyrical mastery and unfailing blend of bawdy humor and devious social commentary, that any production of it has an automatic head start.

So really, your attention is more drawn to the unique spin and context from which any new production emerges than the play itself—and there’s a lot of that here. As the opening play of USC Theatre’s season and the first with Aquila Theatre and Folger Theatre veteran Robert Richmond at the helm of the department as chair (he also directs here), expectations are high to see some of the brilliance on display with his many re-imaginings of Shakespeare on national (and international) stages. That the production itself features some steampunk-esque promotional material and that Richmond invokes the TV show American Horror Story as we as the recent passing of such flamboyant and gender-bending music icons as David Bowie and Prince also heightens interest, even as it suggests some fairly daring creative risks.

Given Richmond’s pedigree, it’s no surprise that these risks never impede on the play itself—from the moment Puck, played with dashing glee by William Quant, bounds on stage to open the show clad in charismatic leather and retro goggles, it’s clear that the thematic spins put on the play are going to be careful not to get in the way of the story’s considerable power and appeal. And although the staging, costumes, and special effects here are incredibly effective, it’s restraint more than anything that wins the day. The scenic and lighting design, delivered by guest artists Bruce Auerbach and third year MFA student Neda Spalajkovic, is sharp and stunning, featuring chairs fastened to the back wall of the theatre and an elegant use umbrellas hanging from the ceiling as well as on the stage floor itself, easily moved around or manipulated to mimic the twists and turns in the forest. It’s both a highly effective and polished while also staying true to the simple, minimal use of props and production in keeping with Shakespeare’s original minimalist productions. Puck’s costume is a standout, as is the bespectacled Peter Quince’s and the darkly grand feuding fairies Titania and Oberon’s black leather and glam-inspired creations.

While some dancing choreography and modern music have been added to spice up the proceedings as well, what shines most after set and costume are the actors themselves. It’s fun to see the Lysander-Hermia-Demetrius-Helena quartet played by age appropriate actors, and each shines here. Freddie Powers plays Lysander with a young, almost smirking charm, while Tristan Hester’s Demetrius takes on a sort of peevish jock flare. And while both deliver strong performances, it’s the female half of this equation that really brings the hijinks to life, with Allie Anderson’s Hermia zeroing in on the angsty self-absorption of her role and Kelsie Hensley playing the absurd demonstrations of Helena with a captivating and knowing satirical wink. Some weaker links inevitably appear further down the totem of this large cast, but it’s tough to argue that they don’t shine as an ensemble. If there’s a star among them, though, it’s likely John Romanski, who seemed born to play the comical and boisterous Nick Bottom. He had the audience rolling in the aisles with almost every line he delivered, with a dynamic stage presence and an infectious energy which appeared to lift up the actors around him.

All in all, this production of the Shakespearean classic is a remarkable one and well-worth seeing, and one that portends a winning season from USC Theatre.

What Jasper Said is the blogging arm of Jasper – The Word on Columbia Arts, a new written-word oriented arts magazine that serves artists and arts lovers in the Columbia, SC area and its environs in four ways: Via Print Media – Jasper is a bi-monthly magazine, releasing in print six times per year in September, November, January, March, May & July, on the 15th of each month. Jasper covers the latest in theatre and dance, visual arts, literary arts, music, and film as well as arts events and happenings; Via Website – Jasper is an interactive website complete with a visual arts gallery, messages from Jasper, an arts events calendar that is updated several times daily, bite-sized stories on arts events, guest editorials, local music, dance & theatre videos, community surveys, and more; Via Blog – What Jasper Said -- you're reading this now -- is a daily blog featuring a rotating schedule of bloggers from the Jasper staff as well as guest bloggers from throughout the arts community; Via Twitter – Jasper Advises is a method of updating the arts community on arts events, as they happen, with more than a half dozen active tweeters who live, work, and play inside the arts community everyday ~ Jasper Advises keeps the arts community abreast of what not to miss, what is happening when it is happening, and where to be to experience it first hand.
View all posts by Jasper →
This entry was posted in General and tagged 2016, a midsummer night's dream, Robert Richmond, Shakespeare, usc theatre. Bookmark the permalink.