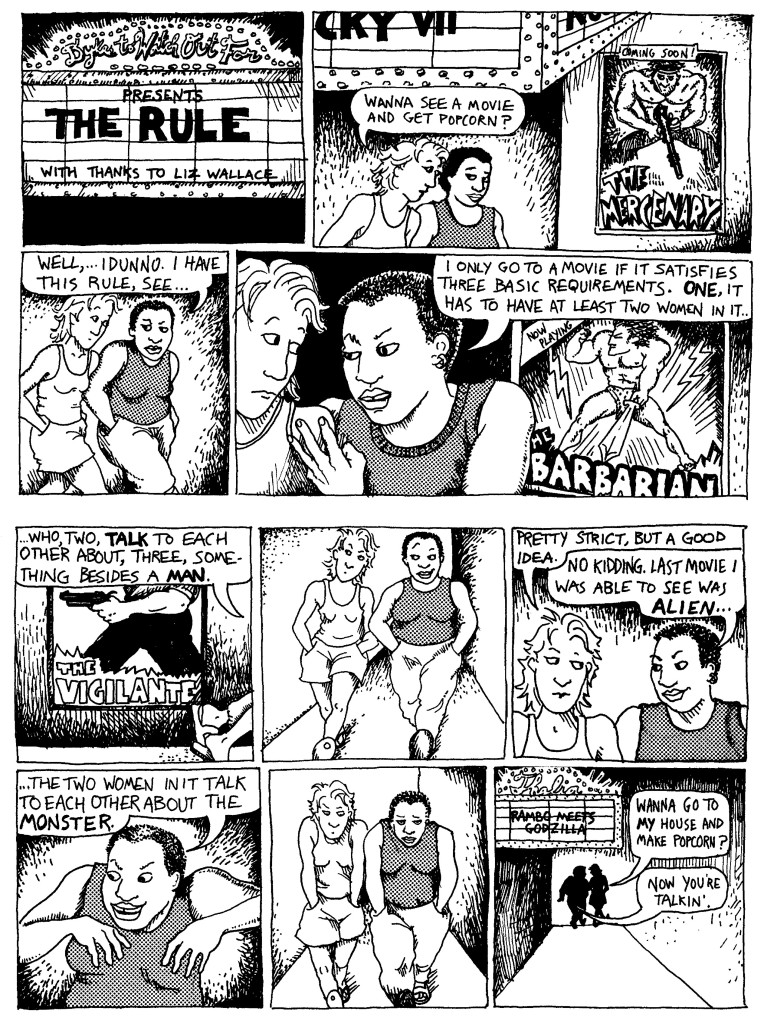 The Bechdel-Wallace Test, also known as the Bechdel Test, emerged out of the 1985 comic strip by Alison Bechdel entitled “The Rule.” In order for a film to pass the Bechdel test, it must satisfy three rules:

At first glance, these may seem like simple stipulations for a film to meet. Yet, many films surprisingly do not pass this test. According to a study completed by Walter Hickey of FiveThirtyEight.com, “In a larger sample of 1,794 movies released from 1970 to 2013, we found that only half had at least one scene in which women talked to each other about something other than a man.” In light of this statistic, it remains imperative to realize that the Bechdel Test does not provide a definitive measure of a film’s overall worth. For instance, some films do not pass the test but they still portray strong female characters. For example, the movies that comprise The Lord of The Rings trilogy do not pass the Bechdel Test; however, each of the films showcase powerful female characters such as the elves Galadriel and Arwen, played by Cate Blanchett and Liv Tyler, respectively. On the other hand, some films that might be interpreted as vapid or sexist, such as this summer’s Mike and Dave Need Wedding Dates (released July 8, 2016), manage to pass the Bechdel Test.

Despite these variables concerning which films pass, the Bechdel Test still reveals an inherent bias against women in film. While the Bechdel Test is certainly not a conclusive source for judging film quality, it reinforces deeper implications like the ingrained prejudice against women in our culture and the sexist stigma prevalent in the film industry today. While it may not provide a comprehensive measurement of film quality, the test still provides insight into the bias displayed against females on screen. Moreover, it sheds light on subliminal messages frequently espoused by the media that relegate women to demeaning roles. We must acknowledge these subconscious messages that perpetuate cultural and sexist stereotypes.

As with any struggle, there are ups and downs in the progress towards gender equality on screen. Nonetheless, female actors seem to be making strides, as demonstrated by some recent summer releases that feature female leads and pass the Bechdel Test. Such films include The Shallows and Ghostbusters. Starring Blake Lively, The Shallows (released June 24, 2016) tells the story of a woman attacked by a shark who must fight for her life while stranded on a rocky outcrop. The Shallows contains more depth than one may initially expect before viewing – Blake Lively’s character acts as an instrument of her own fate, and she succeeds in an impressive way. Even though a male figure appears at the end of the film, he does not act as her savior – she survives due to her own actions, instincts, and will to live. Moreover, the female-dominated cast of the new Ghostbusters (released July 15, 2016) demonstrates a step in a more gender-equal direction within the realm of blockbuster films.

Even so, it remains difficult to gauge the full extent and future of women’s progress on screen, due to the perpetuation of male-centric films, and because the Bechdel Test does not provide a complete measure of a film’s inherent feminism. If nothing else, the test serves as an intriguing surface-level assessment that evaluates on-screen gender disparities and the roles portrayed by women in our male-dominated culture. Clearly, it suggests a rampant and inherent misogyny bred within the movie industry. Of course, many differences between the sexes are to be celebrated; yet, misogyny remains something that females must contend with in both private and public spheres, on and off the screen.

With these thoughts in mind, two local Columbia professionals, Susan Felleman and Kristin Morris, kindly agreed to be interviewed and share their thoughts regarding the Bechdel Test and the state of feminism in film today. Each of their answers provides insight into this culturally and historically relevant topic that cannot be ignored. Their interviews appear below:

Jasper: How did you first learn about the Bechdel-Wallace test?

Felleman:  I am not really sure when I first heard of what was then referred to as the Bechdel test, probably in the late 2000s and possibly from Anita Sarkeesian’s “Feminist Frequency” blog and video series. https://www.youtube.com/watch?v=bLF6sAAMb4s

What was your initial reaction to the Test Requirements?

I guess I found it a useful tool, less for judging films than for getting students to see and think about the sexist conventions of movie stories. At the time I was teaching in a film program.

Do you find any downsides or shortcomings to the Bechdel-Wallace Test?

Of course, if it’s applied programmatically, which it shouldn’t be, as its origins are to be found in a couple frames of a comic strip. As Anita Sarkeesian notes, passing the test doesn’t make a film feminist, or even good. Conversely, it’s possible for a good film to fail the test, even a feminist one! For instance, I noticed that one of my favorite films, one I often teach, Sally Potter’s vanguard and gender-bending film Orlando (1992)—written and directed by a feminist filmmaker; and adapted from a feminist novel by Virginia Woolf—cannot pass the test.

Do you think the Test provides a helpful analysis of female roles in films?

No, not really. It’s more descriptive than analytical.

What are your general thoughts regarding the current state of feminism/female roles in films today?

Oy! Sometimes it seems that the more things change, the more they stay the same. As with filmmakers of color, women have made very slow inroads into mainstream film production as writers, producers, cinematographers, or directors. And, as with people of color and other minorities, the representation of women in commercial film tends to suffer from grievous bias, as well as tokenism. Women are still by and large treated as objects by an exceedingly conventional popular cinema, even in the occasional film in which they are permitted agency.

Things are a little better in independent and some global cinema, and considerably better in documentary filmmaking. And this new golden age of television has been remarkable for women, on both sides of the camera, although television, too, remains male dominated. I’ve noticed for a couple decades now that many women directors who’d had one or two breakthrough independent films but had fallen from view in Hollywood were increasingly turning up in TV credits. The fragmentation of the audience in the current TV environment has allowed for such noteworthy developments as the success of Shonda Rhimes and Netflix’s original shows like Orange is the New Black, Master of None, and Unbreakable Kimmy Schmidt (three series I enjoy!). That said, one mustn’t forget the added prestige and capital invested in shows with a more typical institutional imprimatur, like The Wire, The Sopranos, Breaking Bad, Mad Men, etc.

Jasper: How did you first learn about the Bechdel-Wallace test?

Morris: I can’t remember the exact moment I first heard of the test, but I’d guess about 7 or 8 years ago? I’ve only ever heard it referenced as the ‘Bechdel Test.’

What was your initial reaction to the Test Requirements?

Initially I think everyone jumps right into seeing if any of your favorite films meet the criteria – and quickly realizing that so many big commercial films don’t.

Do you find any downsides or shortcomings to the Bechdel-Wallace Test?

I think it’s a first step, but there are films I wouldn’t necessarily consider ‘pro-woman’ that would meet the criteria. I remember reading an article how the film Sucker Punch passed the Bechdel Test, even though its arguably adolescent boy fantasy that objectifies young women. I also think that feminist thought has developed beyond the simplicity of the Bechdel test. Race, culture, gender identity, nor sexual orientation are addressed, which are all big parts of the feminist conversation we’re having now.

I read a few years ago that Alison Bechdel actually came up with the criteria as a joke in a comic she wrote — so I don’t think it’s initial intention was to be taken as a standard for feminist films. It was framed as the most baseline measurement that could still rarely be met. That’s so sad you have to laugh at it, I guess?!

Do you think the Test provides a helpful analysis of female roles in films?

Not really. If you go through the list of films that pass the test I don’t think you’d see them having strong female characters with interesting and complex relationships. For example, here are some of the films that have been released this year that pass the test: Batman vs. Superman, The Purge: Election Year, Captain America: Civil War, and Warcraft. While these big budget movies technically meet the Bechdel criteria, none of these are primarily representing women.

What are your general thoughts regarding the current state of feminism/female roles in films today? I think the focus on women in film is expanding from acting to include directing, writing, producing, and crews. If you’re ignoring all of the creative process before there’s an actress on a movie screen, you’re missing 90% of the process. Outside of the film world, we’re looking at representation and who’s making decisions. Governments and corporations are intentionally bringing more women on as cabinet members, executives and board members.

In 2015, women accounted for 9% of directors, up 2 percentage points from 2014 but even with the figure from 1998. In other roles, women comprised 11% of writers, 26% of producers, 20% of executive producers, 22% of editors, and 6% of cinematographers (http://womenintvfilm.sdsu.edu/research/). If we had more women at the writing table and behind the cameras there wouldn’t be a need for tests like the Bechdel Test – maybe?

A lot of the work we do at the Nick is featuring filmmakers from marginalized groups. I’m working on a festival in November celebrating the 25th anniversary of the film Daughters of the Dust, which was the first film made by a woman of color to receive national distribution. We’ve invited 8 emerging female filmmakers of color to come to Columbia and exhibit their work and have conversations about their experiences as young women of color in the film industry. There’s more info about the project here: http://nickelodeon.org/festivals/daughters/

—Mary Catherine Ballou is an intern writing for Jasper Magazine.

What Jasper Said is the blogging arm of Jasper – The Word on Columbia Arts, a new written-word oriented arts magazine that serves artists and arts lovers in the Columbia, SC area and its environs in four ways: Via Print Media – Jasper is a bi-monthly magazine, releasing in print six times per year in September, November, January, March, May & July, on the 15th of each month. Jasper covers the latest in theatre and dance, visual arts, literary arts, music, and film as well as arts events and happenings; Via Website – Jasper is an interactive website complete with a visual arts gallery, messages from Jasper, an arts events calendar that is updated several times daily, bite-sized stories on arts events, guest editorials, local music, dance & theatre videos, community surveys, and more; Via Blog – What Jasper Said -- you're reading this now -- is a daily blog featuring a rotating schedule of bloggers from the Jasper staff as well as guest bloggers from throughout the arts community; Via Twitter – Jasper Advises is a method of updating the arts community on arts events, as they happen, with more than a half dozen active tweeters who live, work, and play inside the arts community everyday ~ Jasper Advises keeps the arts community abreast of what not to miss, what is happening when it is happening, and where to be to experience it first hand.
View all posts by Jasper →
This entry was posted in General and tagged Bechdel-Wallace Test, Jasper Magazine, Kristin Morris, Mary Catherine Ballou, Susan Felleman. Bookmark the permalink.