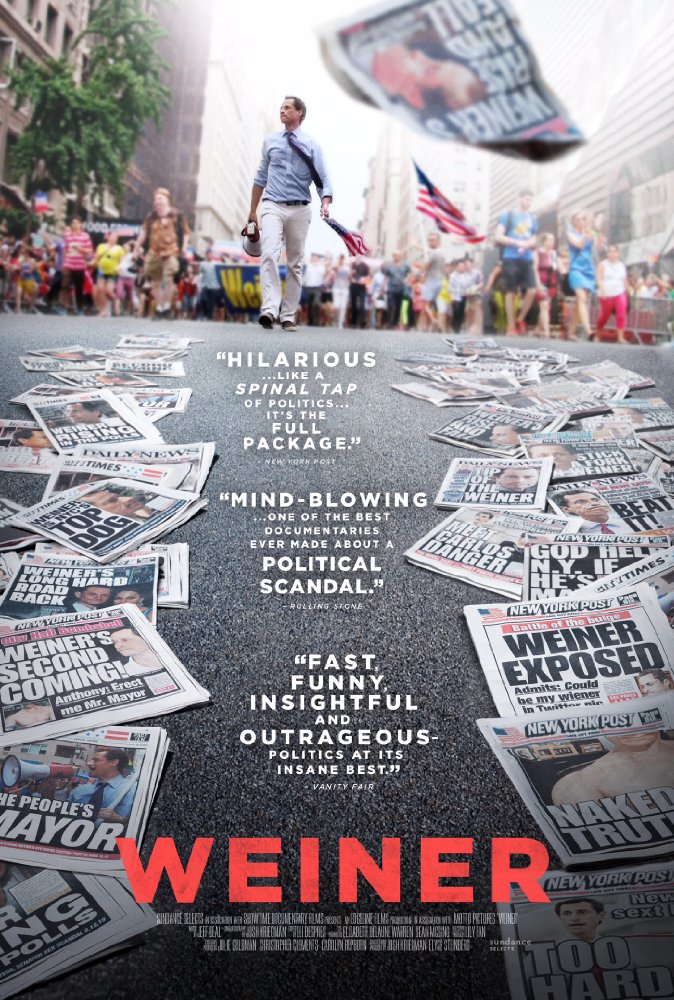 “This documentary is so invasive of Weiner’s personal and political life that the audience is left asking, ‘why did he let them keep filming?'”

Weiner is a recently released documentary directed by Josh Kriegman and Elyse Steinberg, following Anthony Weiner, former representative of New York’s 9th district, and his attempted reascension to political prominence.  The film revolves around Weiner’s run for mayor of New York in 2013, in which he tries to distinguish himself from a humiliating sexting scandal that led to his resignation from Congress in 2011.  He was caught sexting multiple women nude pictures of himself, and the media backlash was unrelenting.  Despite this, for the first half of the documentary, he seems to be remarkably successful.

His wife and Hillary Clinton’s top aide, Huma Abedin, speaks fondly of him when he announces his newfound mayoral campaign.  His office space, which initially housed only a single folding table, grows into a city of makeshift cubicles, overflowing with frenetic twenty-somethings.  A Quinnipiac poll taken from July 18th to July 23rd places Weiner as the frontrunner.  On July 23, in the middle of filming, a second scandal shocks the American public, the film crew, and even Abedin.  Weiner had continued to sext various women after the first scandal broke, this time under the nom de plume ‘Carlos Danger.’

One of the most compelling aspects of the film is the relationship between Weiner and Abedin.  When the second scandal breaks, Weiner and Abedin begin a mission of inscrutable damage control.  The team is gathered into a small, whitewash room with nothing but an economy table, a few shattered chairs, and a mounted television.  Anxiety seems to vibrate off of the group as the details of Weiner’s sexts display dimly off the television.  Abedin appears calm while making calls, the phone wedge between her shoulder and ear.  Then, she glances at the television and sees one of the explicit images her husband sent.  For the first time in the documentary, Abedin’s facade breaks, and her jaw hangs open.  She turns to Weiner and they stare at each other silently for more than twenty agonizing seconds, recorded in high definition, before Weiner asks everyone to leave them alone.  While many documentaries have to dramatize glances and grasp at faux pas, Weiner’s spectacle is held in the unflinching authenticity of this silence.  This documentary is so invasive of Weiner’s personal and political life that the audience is left asking, “why did he let them keep filming?”

The film does not portray Weiner as a sulfur-and-smog noir villain, a trope all too popular in political television dramas.  Weiner isn’t characterized as a buck-toothed, big-headed caricature, mindlessly throwing out buzzwords.  Instead, Weiner is a relatively charming, impassioned man with a fatal flaw.  His downfall echoes the pattern of a Greek tragedy — a successful man is brought down by his own unrelenting lust.  The documentary does an excellent job of providing a balanced view of Weiner.  The filmmakers rely heavily on their own footage, but also give the perspectives of news outlets, comedians, and those who campaigned for and against Weiner.

The film is unpredictable and remarkably compact, jamming an incredible amount of incendiary gossip into just 96 minutes. Weiner explores the depth of political corruption and the complexity of marriage in the public eye, and shows us more than we ever wanted to see of Anthony Weiner.

What Jasper Said is the blogging arm of Jasper – The Word on Columbia Arts, a new written-word oriented arts magazine that serves artists and arts lovers in the Columbia, SC area and its environs in four ways: Via Print Media – Jasper is a bi-monthly magazine, releasing in print six times per year in September, November, January, March, May & July, on the 15th of each month. Jasper covers the latest in theatre and dance, visual arts, literary arts, music, and film as well as arts events and happenings; Via Website – Jasper is an interactive website complete with a visual arts gallery, messages from Jasper, an arts events calendar that is updated several times daily, bite-sized stories on arts events, guest editorials, local music, dance & theatre videos, community surveys, and more; Via Blog – What Jasper Said -- you're reading this now -- is a daily blog featuring a rotating schedule of bloggers from the Jasper staff as well as guest bloggers from throughout the arts community; Via Twitter – Jasper Advises is a method of updating the arts community on arts events, as they happen, with more than a half dozen active tweeters who live, work, and play inside the arts community everyday ~ Jasper Advises keeps the arts community abreast of what not to miss, what is happening when it is happening, and where to be to experience it first hand.
View all posts by Jasper →
This entry was posted in General and tagged Olivia Morris, Weiner. Bookmark the permalink.