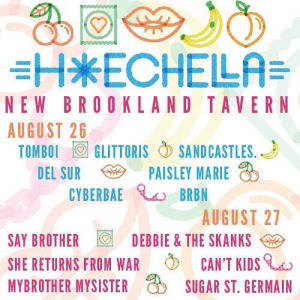 Next month a festival to raise awareness on body-positivity, called Hoechella, will run August 26-27 at New Brookland Tavern. The festival, organized by local musician and stage actor/director, Kari Lebby, was created to combat “slut shaming, rape culture, and unjust legislation that affects people’s bodily autonomy.” This event will be completely free, thanks to Girls Rock Columbia and Girls Rock Charleston, who procured funding for the event, Lebby says.

The decision to throw this event came from a desire to subvert the idea that expressing ones sexuality should be shamed and made to be a bad thing. “It isn’t a bad thing,” Lebby says. “What is a bad thing, however, is the marginalization of women, people of color, and queer people.” By holding this event, they wish to bring artists and leaders from these communities together for visibility and to encourage everyone to be comfortable with who they are, and to be informed about issues that affect us all.

The festival will feature local and regional acts, almost all of them including at least one member who is queer, a woman, or a person of color, according to Lebby. Debbie and the Skanks, Cyberbae, MyBrother MySister, Glittoris, and Can’t Kids will be performing, just to name a few. They cover a wide range of genres, which was another important factor in booking. This is to showcase diverse acts and to hopefully bridge some of the gaps in our ranging music scene.

Hoechella became a fully-realized festival in what seemed like no time at all, but that was not without the help from people and organizations in our community. “I just have crazy ideas, but it takes a ton of people to make it happen!” Lebby says about seeing Hoechella come to fruition. People from the organizations Girls Rock Columbia and Girls Rock Charleston, along with the staff at New Brookland Tavern helped to solidify their plan, while others helped with things like the organizing and designing of the logo.

Lebby hopes this event will encourage people to start speaking out against rape culture, body shaming, slut shaming, and unjust legislation. It will hopefully add a new spin on the typical shows we see here in Columbia, with added awareness and encouragement to be comfortable with one’s self and their personal choices.

For more information, check out Hoechella.org.

What Jasper Said is the blogging arm of Jasper – The Word on Columbia Arts, a new written-word oriented arts magazine that serves artists and arts lovers in the Columbia, SC area and its environs in four ways: Via Print Media – Jasper is a bi-monthly magazine, releasing in print six times per year in September, November, January, March, May & July, on the 15th of each month. Jasper covers the latest in theatre and dance, visual arts, literary arts, music, and film as well as arts events and happenings; Via Website – Jasper is an interactive website complete with a visual arts gallery, messages from Jasper, an arts events calendar that is updated several times daily, bite-sized stories on arts events, guest editorials, local music, dance & theatre videos, community surveys, and more; Via Blog – What Jasper Said -- you're reading this now -- is a daily blog featuring a rotating schedule of bloggers from the Jasper staff as well as guest bloggers from throughout the arts community; Via Twitter – Jasper Advises is a method of updating the arts community on arts events, as they happen, with more than a half dozen active tweeters who live, work, and play inside the arts community everyday ~ Jasper Advises keeps the arts community abreast of what not to miss, what is happening when it is happening, and where to be to experience it first hand.
View all posts by Jasper →
This entry was posted in General and tagged BRBN, Can't Kids, Cyberbae, debbie and the skanks, Del Sur, Girls Rock Charleston, Girls Rock Columbia, Glitorris, Hoechella, Kari Lebby, My Brother, My sister, new brookland tavern, Paisley Marie, Sandcastles, She Returns from War, Sugar St. Germain. Bookmark the permalink.