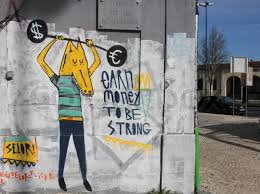 Art is a celebration of humanity’s emotional and technical intelligence. It is what we build ourselves from  and what spills out of us, personal and universal at once. However, art has been pushed aside in favor of STEM subjects in schools. The Republican Study Committee has suggested the arts budget be eliminated entirely. In a world that devalues the emotional and intellectual value of art, an argument can be made in terms everyone can understand — money. Art is money. Areas with art make money.

Artistry-rich areas have a competitive advantage compared to cities without sufficient artistic activities. These areas attract visitors and businesses.  Increased art and culture in a region increases both the amount of foot traffic and the amount of money spent in the area.

In 1905, The Crane Company Building inPhiladelphia was erected as a cast concrete emblem of modernizing architecture. Built in the manufacturing district of northern Philadelphia, the building transformed to meet the shifting American demands, first as a plumbing manufacture, then as a seafood processing plant.  After years of reeking of draft horses and half-frozen shrimp, the building closed and became dilapidated through the twentieth century.  In 2004, a group of local artists restored the building and established Crane Arts, a gallery space for established and emerging artists in Philadelphia. Crane Arts’s ‘Icebox’ art projects have garnered international attention and were mentioned in Lonely Planet’s article on top ten U.S. destinations. This is one of the numerous examples of how fostering artistic expression can lead to increased visibility and visitation of a region.

Stories like Crane Arts don’t only exist in major cities. In Columbia, The Nickelodeon Theater hosts an annual arts and culture festival called Indie Grits. Andy Smith, the Executive Director of The Nickelodeon, shared the figures on how much this one festival contributed to the economy. Indie Grits had 10,267 attendees this year, all in one weekend. 38 percent of those people come from out of town, and therefore increased the profits going towards hotel and restaurants. On average, attendees spent $30 outside of the festival, mostly within a mile radius of the The Nickelodeon.  That is roughly $300,000 dollars being pumped into the non-arts sector over the course of one weekend.

Additionally, arts and culture jobs proliferate into jobs for other sectors. For every arts job that was generated in 2012, 1.62 other non-arts jobs were created as a result. The arts are constantly pumping more into the economy than they are taking out. For every $1 invested in the arts, there is a $1.69 in total output. The nonprofit arts industry creates an average of $135.2 billion every year, resulting in $22.3 billion in tax revenues across the national, state, and local levels. Lee Snelgrove, the Executive Director of One Columbia, brought the Arts & Economic Prosperity IV report on Columbia to our attention. It outlines the economic impact that the nonprofit arts and culture organizations have in Columbia. In the greater Columbia area, total industry expenditures total at $35,898,074.  Columbia alone generates revenues of $1,773,000 to the local government and $2,154,000 to state government.

When 97% of employers report that creativity matters to them when looking for an employee, the fostering of art is not only important to individuals, but also to businesses. South Carolina’s economy is one of the most sluggish in the nation. According to Business Insider, South Carolina ranks as one of the most economically struggling states, the fifth worst in the nation. Instead of eradicating the arts, it has proven already to be more effective to bolster them. Arts and culture invigorate the economy and are vital to placemaking. The arts are not a part of the problem, but rather a part of the solution.

What Jasper Said is the blogging arm of Jasper – The Word on Columbia Arts, a new written-word oriented arts magazine that serves artists and arts lovers in the Columbia, SC area and its environs in four ways: Via Print Media – Jasper is a bi-monthly magazine, releasing in print six times per year in September, November, January, March, May & July, on the 15th of each month. Jasper covers the latest in theatre and dance, visual arts, literary arts, music, and film as well as arts events and happenings; Via Website – Jasper is an interactive website complete with a visual arts gallery, messages from Jasper, an arts events calendar that is updated several times daily, bite-sized stories on arts events, guest editorials, local music, dance & theatre videos, community surveys, and more; Via Blog – What Jasper Said -- you're reading this now -- is a daily blog featuring a rotating schedule of bloggers from the Jasper staff as well as guest bloggers from throughout the arts community; Via Twitter – Jasper Advises is a method of updating the arts community on arts events, as they happen, with more than a half dozen active tweeters who live, work, and play inside the arts community everyday ~ Jasper Advises keeps the arts community abreast of what not to miss, what is happening when it is happening, and where to be to experience it first hand.
View all posts by Jasper →
This entry was posted in General and tagged Andy Smith, columbia, Jasper Magazine, Lee Snelgrove, Olivia Morris, SC. Bookmark the permalink.