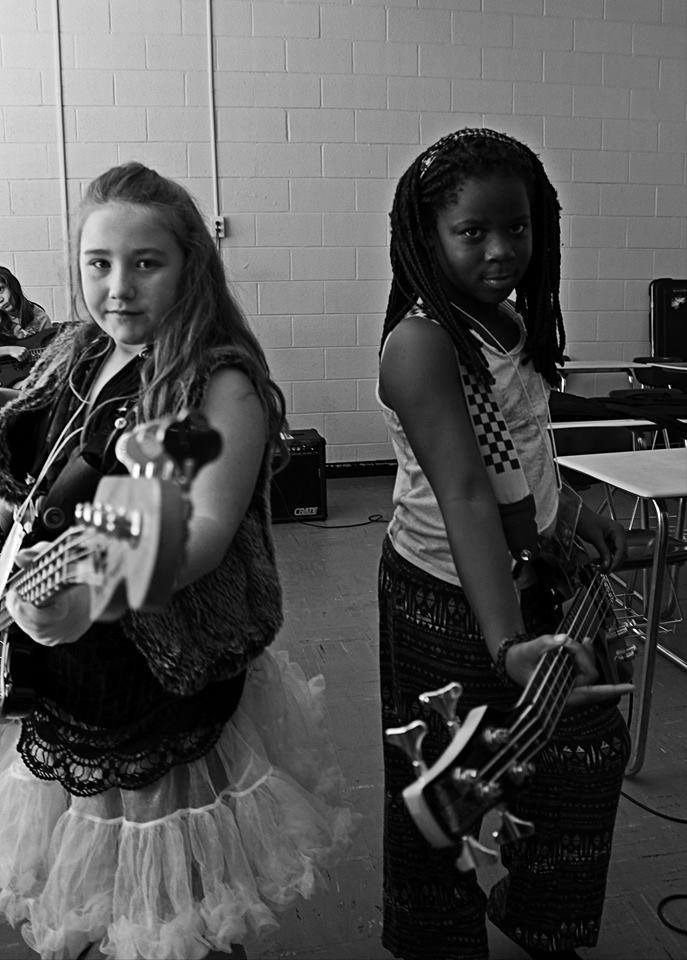 On Thursday June 2 at 6 pm, Girls Rock Columbia will host a block party at Boyd Plaza in front of the Columbia Museum of Art. The event, called Girls Rock the Block will be held as part of First Thursday on Main, Columbia’s monthly arts event on Main Street. It’ll be a free event with live music and food by the Wurst Wagen. All proceeds will go to benefit Girls Rock Columbia, so that they can continue to enrich the lives of our community’s youth.

If you haven’t heard, Girls Rock Columbia is our local chapter of the Girls Rock Camp Alliance (GRCA), which is an international coalition of organizations that aims to empower women and girls through music education, to foster confidence and self-esteem. GRCA was founded in 2007 in Portland, OR, and now has over 60 camps worldwide.

This will be Columbia’s 4th annual Girls Rock Camp, and it will be bigger than ever. I spoke with Mollie Williamson, executive director of Girls Rock Columbia, about this event and all of the organization’s exciting developments.

Instead of the usual one-week camp they’ve had in the past, this year Girls Rock Columbia will launch its two-week teen leadership program, where teens ages 13-17 will have camp the first week and return as teen leaders for the general camp the following week, which is for campers ages 8-12.

“They’ll be acting as peer mentors—repairing gear, facilitating workshops, and just largely contributing to things running smoothly,” Mollie said. “We’re super excited to give them the opportunity to lead!”

Girls Rock Columbia has also started an internship program this year and implemented their first board of directors in January. The camp itself has also grown; there will be 24 teen campers in the first week, and 84 during the general session, a huge jump from the original 17 campers its first year. In the past, campers were offered 10 workshops, and this year there will be 40.

With all these changes, Girls Rock needs as much help from the community as possible. The block party on Thursday is one way people can get involved, since proceeds will go to Girls Rock to help with programming. Live music will be performed by Jacksonville, FL electronic group Tomboi, and locals Can’t Kids and Paisley Marie, all of whom have been involved with Girls Rock.

“We’ll have a table at Girls Rock the Block, so stop by and shoot the breeze with us!” says Mollie.

For more information on Girls Rock Columbia and this fun event, check out girlsrockcolumbia.org

What Jasper Said is the blogging arm of Jasper – The Word on Columbia Arts, a new written-word oriented arts magazine that serves artists and arts lovers in the Columbia, SC area and its environs in four ways: Via Print Media – Jasper is a bi-monthly magazine, releasing in print six times per year in September, November, January, March, May & July, on the 15th of each month. Jasper covers the latest in theatre and dance, visual arts, literary arts, music, and film as well as arts events and happenings; Via Website – Jasper is an interactive website complete with a visual arts gallery, messages from Jasper, an arts events calendar that is updated several times daily, bite-sized stories on arts events, guest editorials, local music, dance & theatre videos, community surveys, and more; Via Blog – What Jasper Said -- you're reading this now -- is a daily blog featuring a rotating schedule of bloggers from the Jasper staff as well as guest bloggers from throughout the arts community; Via Twitter – Jasper Advises is a method of updating the arts community on arts events, as they happen, with more than a half dozen active tweeters who live, work, and play inside the arts community everyday ~ Jasper Advises keeps the arts community abreast of what not to miss, what is happening when it is happening, and where to be to experience it first hand.
View all posts by Jasper →
This entry was posted in General and tagged Can't Kids, Columbia Museum of Art, First Thursday on Main, Girls Rock Columbia, Girls Rock the Block, Mollie Williamson, Ony Ratsimbaharison, Paisley Marie, Tomboi. Bookmark the permalink.