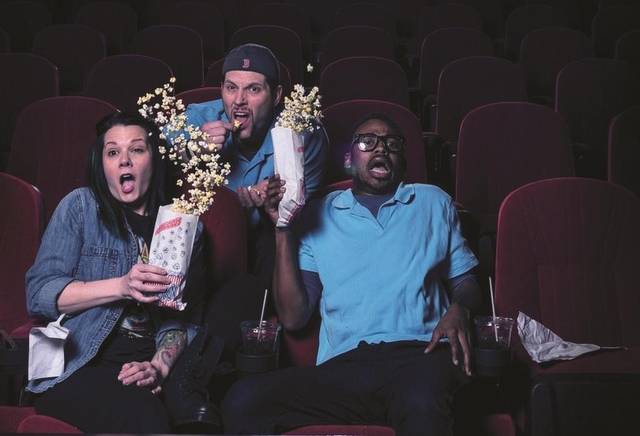 I can still smell the warm, slightly musty aroma of the Nick right now.

Not the new, wonderfully renovated Fox Theatre that The Nickelodeon occupies now, of course, but that old, worn-out room hiding behind the State House. Where there were maybe 60 seats and a small screen. Where you could buy a bucket of beers that would furtively clink together over the course of a film. Where the smell of popcorn mingled with the smell of the underground, and watching an independent film felt like it might still be a subversive act in this sleepy Southern town.

The Flick, Trustus Theatre’s latest production and the 2014 Pulitzer Prize for Drama for playwright Annie Baker, isn’t about a theatre exactly like the old Nick, but it’s close enough to make me misty. In part because the play itself grapples with nostalgia and sentiment in the confines of a theatre that’s not too different from that old black box, and one that goes through tangentially similar growing pains over the course of the narrative (right down to the shift from film reels to digital projectors).

The story takes place in a small, rundown movie theatre that’s clearly on its last legs. The three main characters are all employees there, and the action takes place almost entirely between screenings as they clean the floors over and over again, something that should make the action feel repetitive but somehow doesn’t, mostly through Baker’s deft ability to write a kind of comedic realism that is always sharp but never showy. Most of the early action centers on Sam (Ben Blazer), the thirtysomething experienced hand who gripes about not being promoted to projectionist, and Avery (Kendrick Marion), a young, bespectacled black nerd who is taking some time off from college to work in a movie theatre. A third character, the free-spirited and gregarious Rose, is the projectionist, and is gradually woven in as the trio gets to know each other slowly and awkwardly, the way people do in real life.

There is drama and tension here, but Baker opts for an anti-sensational approach to the action as she “holds a mirror up” to the reality of tedious, behind-the-scenes minimum wage jobs that are often occupied by people whose dreams have been thwarted or never really blossomed to begin with.  But the narrative pace also allows so many different themes and reflections to emerge over the course of the lengthy run time—the subtle, nuanced ways race and class affect how we approach the world, the often confusing and conflicting ways workplace relationships evolve, and the impact of movies on how we understand and bond with one another.

Much of the buzz around this play has billed it as a “love letter to the cinema,” but that doesn’t seem quite right to me. That’s not to say that the love of movies doesn’t play a prominent role, but to me the play seemed to be more curious about how places and things become imbued with the people we connect them with, that this rundown movie theatre became a place where Rose, Avery, and Sam learned from and about each other. The trio is thrown together through the odd happenstance of needing work and loving film, and little else, yet they forge a very specific kind of friendship through the hours and hours of menial work they do together in the confines of that single-screen theatre.

As usual, Trustus produced an ace production for this relatively austere play. The set features beat-up old movie theatre seats that were pulled up from Spotlight Cinema on St. Andrews that had to be a bear to install on the tilted floor that gave the set just the right verisimilitude, as did the real film projector on loan to the theatre. For a play with the potential to sprawl with literal untidy messes, director Dewey Scott-Wiley kept the blocking and pacing fairly tight, with only a few dramatic pauses of work to drive home the sense of endless cleaning that dominates these characters’ lives. All of the performances are quite strong—Marion’s performance particular is astounding, in large part because his previous roles have emphasized his powerhouse singing voice and required flamboyant performances, whereas here he shrinks up into a succession of halting pauses, facial tics, and frowns as Avery, worlds away from R&B frontman Jimmy Thunder in Dreamgirls. Both Ben Blazer as Sam and Christine Hellman as Rose had to put on tough Boston brogues and embody individuals that can bounce from stereotypically dead-end types to puzzlingly complex in a heartbeat. Each brings their character to life with a deceptive sense of ease that would have left this production gasping without them. Trustus Apprentice Company member Colin Milligan also performs admirably in his debut with the small role he plays as the cast’s fourth member.

Sandwiched between two productions which seem to guarantee a much more boisterous and fun night of entertainment on the Trustus schedule—Peter and the Star Catcher before this and Green Day’s American Idiot following the run—there might be a sense that this is an eat-your-vegetables play, something too self-involved and navel-gazing in its commitment to contemporary realism and the role of storytelling and theatrics. I can’t guarantee you won’t leave the theatre feeling that way, but for my money The Flick is an example of how singularly powerful theatre can actually be. This is a story that requires you to think about people, stories and lives that can exist—that can be imaginatively projected—in a confined space, and how we are still asking old questions and searching for new answers in those spaces. More power to Trustus for continuing, commenting, and expanding that powerful and time-honored tradition with The Flick.

The Flick runs through Saturday, June 4. Go to trustus.org for ticket information.

What Jasper Said is the blogging arm of Jasper – The Word on Columbia Arts, a new written-word oriented arts magazine that serves artists and arts lovers in the Columbia, SC area and its environs in four ways: Via Print Media – Jasper is a bi-monthly magazine, releasing in print six times per year in September, November, January, March, May & July, on the 15th of each month. Jasper covers the latest in theatre and dance, visual arts, literary arts, music, and film as well as arts events and happenings; Via Website – Jasper is an interactive website complete with a visual arts gallery, messages from Jasper, an arts events calendar that is updated several times daily, bite-sized stories on arts events, guest editorials, local music, dance & theatre videos, community surveys, and more; Via Blog – What Jasper Said -- you're reading this now -- is a daily blog featuring a rotating schedule of bloggers from the Jasper staff as well as guest bloggers from throughout the arts community; Via Twitter – Jasper Advises is a method of updating the arts community on arts events, as they happen, with more than a half dozen active tweeters who live, work, and play inside the arts community everyday ~ Jasper Advises keeps the arts community abreast of what not to miss, what is happening when it is happening, and where to be to experience it first hand.
View all posts by Jasper →
This entry was posted in General and tagged annie baker, Ben Blazer, christine hellman, Kendrick Marion, the flick, trustus. Bookmark the permalink.