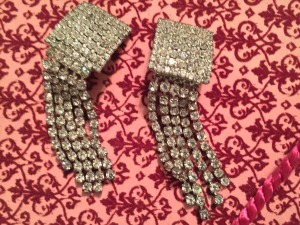 Last Monday I published a poem online at the Good Men Project, a website devoted to rethinking masculinity—“Translations,” a poem about gender and race and how we like to put people in boxes.  I had been teaching creative writing to some young writers last fall, I was still thinking about the Confederate battle flag and the Black Lives Matter movement, and I had been asked to write a poem for a transgender remembrance ceremony and the GLBTQ student organization’s “lavender graduation” ceremony.  It all came together in this prose poem, maybe more essay—in the old sense of trying out something, thinking through something—than poem.  (I am deeply grateful to my student Caleb for talking with me about non-binary identification—his words are the heart of the poem.)

I’ve been thinking a lot about gender, as I prepare for my performance in Vista Queen this coming Monday, because gender is very much in the air, in the cultural conversation—from Trump’s misogyny to Hillary’s candidacy.

On March 24, North Carolina passed a law that has been called “the most anti-LGBT legislation in the country.”  It undoes all local nondiscrimination laws and specifically excludes gay, lesbian, and transgender people from legal protections.

Before I entered, I asked my colleagues in Women’s and Gender Studies if it was okay for me to enter.  They said sure.  One said don’t do it—not because she objected, she just said, “You’re already too busy and beleaguered.”  Well, true.

But I asked because drag can be risky business when you work in gender studies.

On the one hand, drag is a central example in the work of theorist Judith Butler and celebrated by folks influenced by that work.  Drag, they say, makes visible that all gender identity is a performance, a repetition of acts and styles and embodied tropes of how we fit—or don’t fit—into the binary gender system: male/female.  (Yes, there’s a Wikipedia page on this.)

But, on the other hand, I suppose there’s that old gay tradition of female impersonation that tends toward misogyny rather than subversion or understanding.  For example, see this really smart essay from a Stanford student which notes, “if drag is to be subversive, then it must challenge or undermine systems or institutions that oppress those performing.”  Yes, I think, as I work on Tess DeMint’s script.  That is, the subversion mustn’t simply reinforce the powers that be, but question them.

I think about those old “womanless weddings” often held in rural Southern churches and segregated high schools in the 1940s and 1950s—often connected, as Brock Thompson notes in The Un-Natural State: Arkansas and the Queer South, to blackface minstrelsy as well. These performances were popular across Arkansas and the South, and, as Thompson points out, had more appeal (and played a more essential function in enforcing behavior) in communities where the racial and class divides were stark.

I think about the fact that, according to Chris Bull and John Gallagher’s Perfect Enemies, an analysis of anti-gay politics, that one of the most effective and prevalent tropes of anti-gay organizing in the 1990s was a male teacher in drag.

The Stanford student also says that “as drag becomes more and more a mainstay of our culture, it is important for those partaking in it—queer or not—to be mindful of and question the origins and implications of the personas we perform.”

Over spring break I read the biography of Panti Bliss, the extraordinary Irish drag queen, featured in the recent documentary The Queen of Ireland.  I’ve had the extraordinary pleasure of seeing Panti perform several times when I’ve been over in Ireland—even once attending the low-key and lovely Monday night “Make-and-Do-Do” craft nights at Pantibar, where she assigns a craft project and a bunch of grown men do their best with craft sticks and pipe-cleaners and marla (Irish for Playdoh).  I think our assignment that night was something Brazilian.  Laughter, community, friendship—all of it with the soundtrack of the hilarious Panti and the deeply nostalgic primary classroom smell of Playdoh.

I’ve been thinking about Panti as I work on Tess, about what drag can and can’t do. If you don’t know Panti, you should watch her speech—her noble call—on a Dublin theatre stag about homophobia.  Yes, I’m raising money for an institution that I love, a theatre that has in its very mission statement: “Our success will be measured by our commitment to collaboration and innovation, while our impact will be measured by the creation of a more diverse and vibrant Columbia.”

A more diverse and vibrant Columbia.

Tess has been writing a few little limericks in preparation for the performance, just in case she has occasion to recite a poem or two.  While most of them are about herself, as they should be, there’s this one she wrote this morning:

A not very Bright man named Lee
wants to police who can and can’t pee.
But trans is no crime,
so let’s say, no not this time,
and fight Mr. Bright’s bigotry.

I’m a 52-year-old (yes, really) man who has never done drag (yes, really)—unless you count the bearded college student in a bathrobe who lip-synched “You Can’t Hurry Love” with 3 friends at a church retreat (I don’t).

Panti says in her recently released autobiography A Woman in the Making that, if you can’t quite achieve beauty, you can certainly achieve interesting.

Maybe Vista Queen isn’t supposed to be political, but when I slip on my heels and try to walk and move through the world in shoes that slow me down and make me conscious of my body in ways I’ve never been conscious of my body, I think otherwise.  I think about the annual Walk A Mile In Her Shoes march against rape and sexual assault, the local event hosted by Sexual Trauma Services of the Midlands to be held next Thursday, April 14.  (Register here before Sunday!)

I’m still tinkering with my act.  It will be an evening of people doing deeply uncomfortable and outrageous things for a theatre they love.  I hope it’s interesting.  I hope it’s subversive.  I hope it raises lots of money for Trustus.  Mostly I hope I can stay upright on those heels.

You can donate to Tess DeMint online at Trustus, or at her GoFundMe page.  It’s for a great theatre, a good cause.

As Panti says, You learn a lot in drag.

What Jasper Said is the blogging arm of Jasper – The Word on Columbia Arts, a new written-word oriented arts magazine that serves artists and arts lovers in the Columbia, SC area and its environs in four ways: Via Print Media – Jasper is a bi-monthly magazine, releasing in print six times per year in September, November, January, March, May & July, on the 15th of each month. Jasper covers the latest in theatre and dance, visual arts, literary arts, music, and film as well as arts events and happenings; Via Website – Jasper is an interactive website complete with a visual arts gallery, messages from Jasper, an arts events calendar that is updated several times daily, bite-sized stories on arts events, guest editorials, local music, dance & theatre videos, community surveys, and more; Via Blog – What Jasper Said -- you're reading this now -- is a daily blog featuring a rotating schedule of bloggers from the Jasper staff as well as guest bloggers from throughout the arts community; Via Twitter – Jasper Advises is a method of updating the arts community on arts events, as they happen, with more than a half dozen active tweeters who live, work, and play inside the arts community everyday ~ Jasper Advises keeps the arts community abreast of what not to miss, what is happening when it is happening, and where to be to experience it first hand.
View all posts by Jasper →
This entry was posted in General and tagged columbia, drag culture, Ed Madden, HB2, lee bright, Poet Laureate, south carolina, trans visibility, trustus, Vista Queen. Bookmark the permalink.