It’s the 18th annual Vista Queen pageant at Trustus Theatre and, this year, Jasper will be bringing readers a behind-the-scenes look at the tucking and taping and general mayhem that accompanies the only kind of pageant we could ever support – a mockery!

You’ll be learning more about Tess in the weeks to come.

In the meantime, Tess and Ed have started doing the work that it takes to be a woman. As Simone De Beauvoir  says, “One is not born a woman, but becomes one.” Here’s a bit of what that involves — 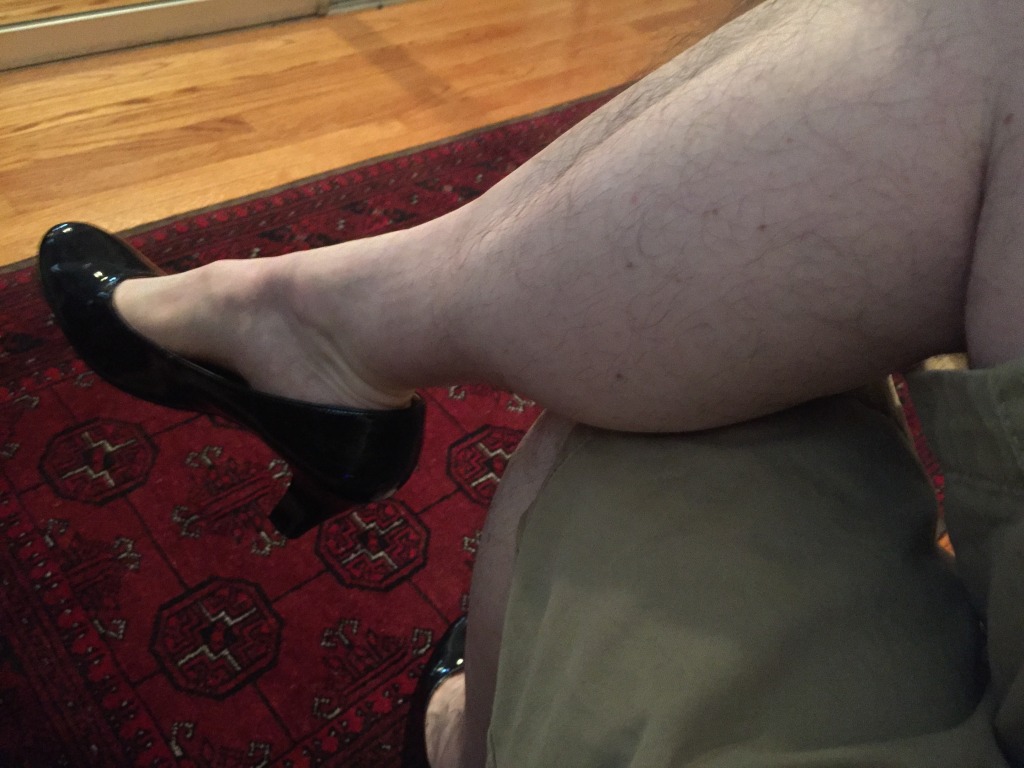 I’m wearing high heels as I write this.

I’ve been wearing them the past hour or so as I move about the hotel room, putting away things, washing my face, answering emails.  I’m trying to get used to them, used to how I walk in them, used to how I should walk in them.  On Monday, when I met with Tio for my first drag consultation, he told me I walked like a gorilla, told me that I needed to let my hips and arms move.  He had helped me into hip pads and a dress, after I’d pulled on the obligatory three sets of stockings and tights, after I’d tucked myself best I could.  When he asked me if I knew about “tucking,” I said that I had read about it.  I’m an academic: it’s what I do.  He laughed.  I was the first person, he said, who had ever told him they read about tucking.  It was actually a little scary to read—especially when you see, “This may cause damage to the genitalia.”  Tio assured me that I didn’t have to use tape.

I walked around the room, best I could.  A gorilla.  He said I seemed to be getting better every time he turned around.  Bert said it was a little scary.  Tio told me to wear the heels around the house, to practice walking in them.

A video I found online tells me to look up and straight ahead, not at my feet.  Yes, I have been watching videos on how to walk.  I also watched some Yanis Marshall videos—more inspiration than aspiration, nothing I could imagine doing myself.  (I also think Arnaud Boursain—the tall bearded one—is sexy.)

So I’m sitting in a hotel room in Spartanburg, after attending Bodies of Knowledge, a gender studies conference at USC Upstate, in a pair of very black and very shiny high heels, about two inches high.  (Wishful thinking? Maybe I exaggerate?)  The rest of me looks like the rest of me: khaki pants, a green button-down shirt, some green striped socks.

I’m thinking about gender and heels and movement.  At the conference, I participated in a “queer movement” workshop with the enthusiastic performance artist Leigh Hendrix.  I hadn’t intended to stay for that last session, but I asked Leigh if it would help me be a better Vista Queen.  She assured me it would, if only to think about how my body moves.  We curled on the floor in fetal position.  We moved through the room with our six limbs (arms, legs, head, tail).  We did what felt comfortable; we stopped if it didn’t.  Make a heroic shape, she said.  I stood like the statue of an orator.  Make a male shape, she said.  Arms crossed, legs spread, aggressive stare.  Someone else sat on the floor, manspreading.  Make a female shape.  I stood legs slightly crossed, my hip out, one arm loosely crossing my chest, the other lifted, my wrist bent, my hand curled loosely back, a finger pensive against my chin, a downcast but withering gaze.  Honestly, I felt more Tim Gunn than female.  Leigh looked at me, laughed: you’re ready.

But we weren’t wearing heels.

What Jasper Said is the blogging arm of Jasper – The Word on Columbia Arts, a new written-word oriented arts magazine that serves artists and arts lovers in the Columbia, SC area and its environs in four ways: Via Print Media – Jasper is a bi-monthly magazine, releasing in print six times per year in September, November, January, March, May & July, on the 15th of each month. Jasper covers the latest in theatre and dance, visual arts, literary arts, music, and film as well as arts events and happenings; Via Website – Jasper is an interactive website complete with a visual arts gallery, messages from Jasper, an arts events calendar that is updated several times daily, bite-sized stories on arts events, guest editorials, local music, dance & theatre videos, community surveys, and more; Via Blog – What Jasper Said -- you're reading this now -- is a daily blog featuring a rotating schedule of bloggers from the Jasper staff as well as guest bloggers from throughout the arts community; Via Twitter – Jasper Advises is a method of updating the arts community on arts events, as they happen, with more than a half dozen active tweeters who live, work, and play inside the arts community everyday ~ Jasper Advises keeps the arts community abreast of what not to miss, what is happening when it is happening, and where to be to experience it first hand.
View all posts by Jasper →
This entry was posted in General and tagged Ed Madden, Tess DeMint, TRUSTUS Theatre, Vista Queen. Bookmark the permalink.