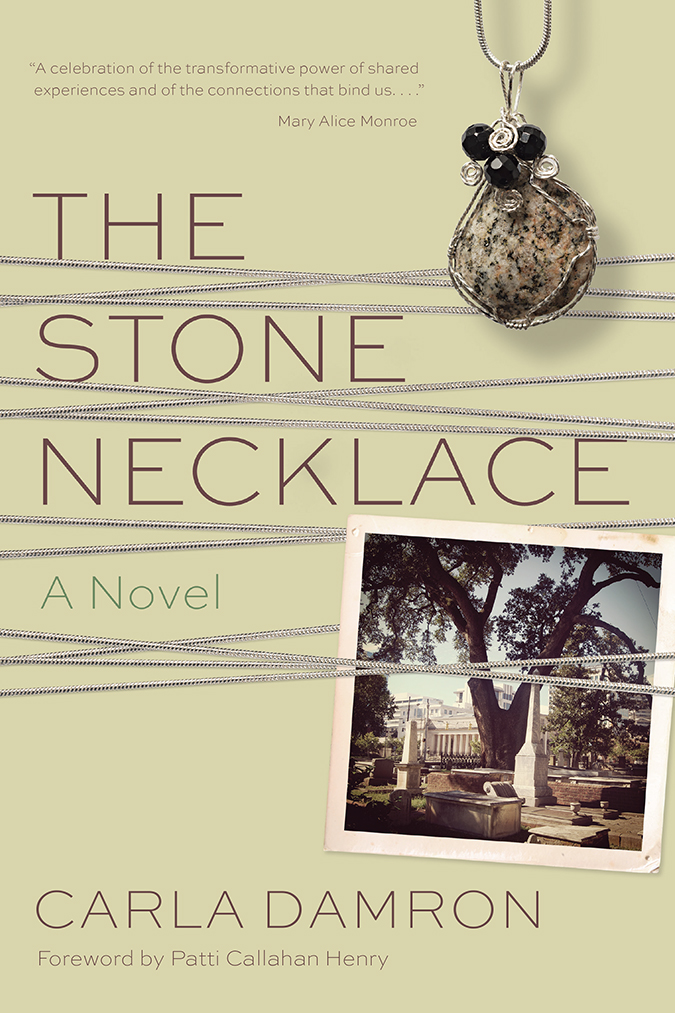 In celebration of the 2016 One Book, One Community selection, The Stone Necklace by Carla Damron (USC Press, 2016) a number of multi-disciplinary arts events are planned to more fully enjoy the community reading experience, including a three-person photography exhibit opening on Thursday, February 4th with a panel presentation by the participating photographers. In the weeks to come additional programs involving theatre arts and music, all inspired by a reading of The Stone Necklace, are also planned.

Set against the backdrop of contemporary Columbia, South Carolina, The Stone Necklace braids together the stories of a grieving widow, a struggling nurse, a young mother, and a homeless madman, reminding us of the empowering and surprising ways in which our lives touch one another and through which, together, we recover from even the greatest of losses. Bestselling and award-winning author Mary Alice Monroe praises The Stone Necklace as “a celebration of the transformative power of shared experiences and of the connections that bind us.”

Off Page – Photography: Artists Respond to The Stone Necklace will open on the Tapp’s Arts Center on Thursday, February 4th as part of the First Thursday celebration of Columbia arts. Columbia photographers Thomas Hammond, Robert Coffey, and Kristine Hartvigsen, having read advanced copies of the novel, will show the work they created in response. A brief panel presentation discussing the exhibit will take place at 7 pm in the Fountain Room downstairs at Tapp’s. https://www.facebook.com/events/542294492601031/. Free.

Off Page – Music: A Musical Response to The Stone Necklace featuring original work created by Todd Mathis and Cully Salehi in response to the novel The Stone Necklace will take place on Saturday, February 20th at 7 pm at the Deckle Edge Literary Festival Saturday Night Reception at Main Street Agape. Tickets available via Brown Paper Tickets.

The above events are presented via a partnership between One Book, One Columbia, One Columbia for Arts and History, Jasper Magazine, The University of South Carolina Press, and Richland Library.

South Carolinian Carla Damron is a fiction writer, clinical social worker, and author of the Caleb Knowles mystery novels Keeping Silent, Spider Blue, and Death in Zooville in which she explores addiction, homelessness, and other social issues. Her short stories have appeared in Fall Lines, Six Minute Magazine, Melusine, In Posse Review,and other journals. Named the 2014 South Carolina Social Worker of the Year, Damron holds an M.F.A. in creative writing from Queens University and a master’s degree in social work from the University of South Carolina.

Thomas Hammond is a freelance photojournalist from Columbia, South Carolina specializing in human interest, political, and cultural stories from the heart of the American South to the Middle East and wherever else the road takes him. In 2015, he won a South Carolina Press Association award for his work documenting the war and humanitarian crisis in and around Syria. More recently, he’s covered local stories such as the removal of the Confederate flag, the devastation of the recent floods, and the evolution of the local music scene.

Born in San Francisco, California, Kristine Hartvigsen earned a bachelor’s degree in education and completed graduate studies in journalism at the University of South Carolina. She began her journalism career in the mid-1980s at The State and The Columbia Record newspapers. She is a past editor of South Carolina Business and Lake Murray-Columbia magazines as well as a past associate editor of Jasper magazine. Her photography has been published in:  Sandlapper, South Carolina Business Monthly, Lake Murray-Columbia, Columbia Business Monthly, and Jasper magazines; in The State, the Free-Times, the Myrtle Beach Sun News, Lowcountry Life, and the Georgetown Times newspapers; as well as in print and online publications of the South Carolina Chamber of Commerce, The Nature Conservancy of South Carolina, and the South Carolina Education Association. In 2012, Muddy Ford Press published her first poetry collection, To the Wren Nesting.

Vicky Saye Henderson is a performer and teaching artist, whose projects include live stage, film, TV, voice-overs and cabaret. On staff at Trustus Theatre, she serves as Director of Education and Professional Development.  She is also a member of Trustus’ residential performing ensemble, appearing most recently in The Great American Trailer Park Christmas Musical. She is the recipient of the SC Arts Commission’s 2015 Individual Artist Fellowship in Acting and was named the 2013 Jasper Artist of the Year in Theatre. She received her improv training in Orlando, FL (KVG Studios) and is co-director of Trustus’ Improv and Sketch Comedy master track Apprentice Company program. Vicky recently provided vocal narration for USC Press’ audiobook of Carla Damron’s novel, The Stone Necklace.

For the past 15 years, Todd Mathis has been a solid fixture of the South Carolina music scene, and well beyond, playing in a number of groups from the indie soul of Betty Sneetch to the Brit-tinged rock of Boxing Day (Universal/Republic), fronting the alt-country turned rock of American Gun, crafting the soundscapes of Interruptions of the Mind, and releasing a few solo albums along the way.

Cully Salehi, a graduate of North Carolina School of the Arts, began her journey in music as an orchestral violist. After eight years of classical playing she began exploring the worlds of improvisation, jazz, and rock. Since contributing viola and keys to North Carolina Indie rock group Silver Hill Mine, she has performed several seasons with Columbia Community Orchestra and Lake Murray Symphony Orchestra. She currently enjoys playing local venues, growing in her own songwriting, and collaborating on recording projects at Jangly Records.

What Jasper Said is the blogging arm of Jasper – The Word on Columbia Arts, a new written-word oriented arts magazine that serves artists and arts lovers in the Columbia, SC area and its environs in four ways: Via Print Media – Jasper is a bi-monthly magazine, releasing in print six times per year in September, November, January, March, May & July, on the 15th of each month. Jasper covers the latest in theatre and dance, visual arts, literary arts, music, and film as well as arts events and happenings; Via Website – Jasper is an interactive website complete with a visual arts gallery, messages from Jasper, an arts events calendar that is updated several times daily, bite-sized stories on arts events, guest editorials, local music, dance & theatre videos, community surveys, and more; Via Blog – What Jasper Said -- you're reading this now -- is a daily blog featuring a rotating schedule of bloggers from the Jasper staff as well as guest bloggers from throughout the arts community; Via Twitter – Jasper Advises is a method of updating the arts community on arts events, as they happen, with more than a half dozen active tweeters who live, work, and play inside the arts community everyday ~ Jasper Advises keeps the arts community abreast of what not to miss, what is happening when it is happening, and where to be to experience it first hand.
View all posts by Jasper →
This entry was posted in General and tagged Carla Damron, Cully Salehi, Kristine Hartvigsen, Rob Coffey, The Stone Necklace, Thomas Hammond, Todd Mathis, Vicky Saye Henderson. Bookmark the permalink.