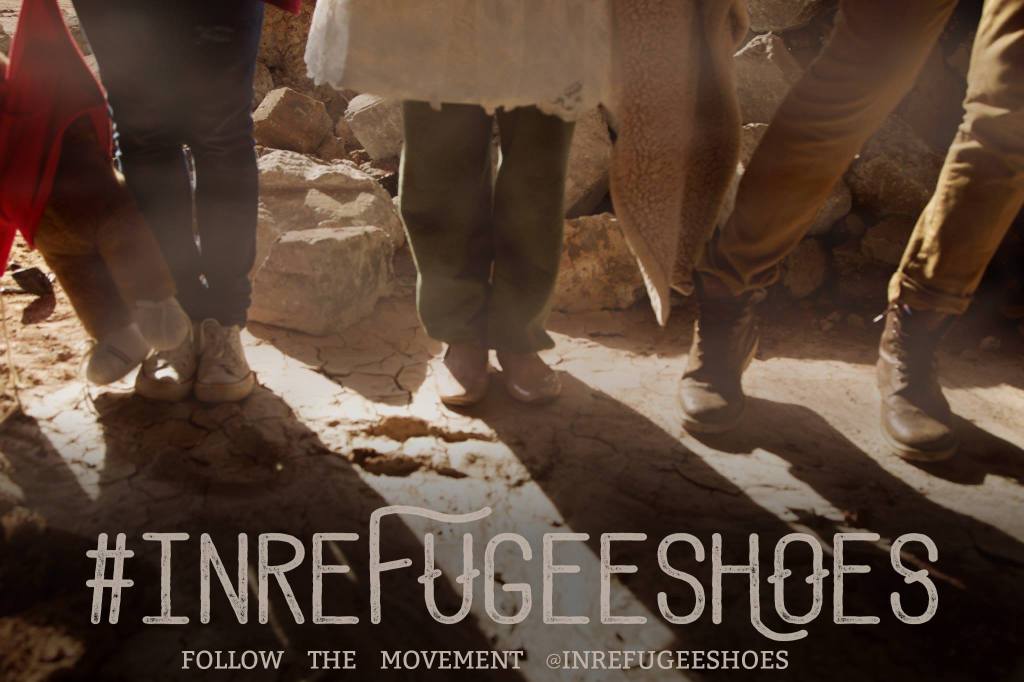 “It’s hard for us to put ourselves in other people’s shoes, especially if we can’t see what is happening.”

That’s how Rosalind Graverson, Events Coordinator of local business Singing Fox Creative, opens up about Syrian refugees. In Turkey alone, there are almost 2 million registered Syrian refugees, fleeing for their safety in the midst of crisis. Backlash against refugees fleeing to America has plagued the media, especially among presidential candidates seeking to gain American approval. Graverson, along with founder of Singing Fox Creative, Catherine Hunsinger, sought to shed a different light on this situation through their short film #InRefugeeShoes.

“Thanks to social media, we live in a world where hate and fear spread faster than wildfire. It’s so easy to fight hate with hate; to fight fear with fear – this film is important because it’s utterly hate-free,” Hunsinger says. “Our incredible production team, cast, and crew all care about one message and one message only: we are all one. What one of us suffers, we all suffer. If we continue to fight hate with hate, we’ll get nowhere. My hope is that this film will inspire others to fight hate with love and to make a positive difference in the world.”

The idea for the project came to Hunsinger while discussing the weight of the refugee situation with friends, and within an hour, she and Graverson assembled a film crew and the majority of their cast.

“I have a few select friends who will allow me to hop up onto my humanitarian soap box and preach from time to time. One day a few weeks ago, I was standing on that proverbial soap box, begging to understand how one can look at a Syrian refugee as anything but a fellow human being – another member of our single most important race: the human race. It hit me that my hushed conversations with friends who already agree with me were making no difference, which is when I decided that I needed to DO something. But how does one have a conversation with someone who doesn’t want to listen?” Hunsinger asks. “This was the question that ultimately led us to the film format. How do we ask someone to have a conversation with themselves, with no ideas to argue with but their own? Film. And how do we paint this picture in a way that will help people truly view the Syrian Refugee Crisis through purely human eyes? Paint the picture as if it were happening to US.”

Over the course of three days, the film was shot with a talented group of local film and theatre professionals. Two weeks later, and the film is debuting tonight at Coconuts Tropical Cafe. The premiere event begins at 6:30, with screenings of the film both at 7:00 and at 8:00.

“Before when I thought of refugees, all I saw was the homeless aspect of it. Of course that still is a huge part of it, but these were normal people, with jobs, families, hobbies, pets. Now they’re living in fear of ISIS, of losing their families, of each other. It’s hard to imagine what it could be like for us, but I’m hoping that the film helps to scratch the surface,” Graverson adds. “My hope is that people will just stop and think. I don’t know if it will change anything, but we’ve already seen some positive feedback so that’s really encouraging, telling us that we’re on the right path… Maybe this will help us see more kindness and love, or at least some forethought before we post that comment or share that story.”

At the end of the day, this film seeks to bring people together and offer a different perspective to the public about the everyday plight that Syrian refugees continue to face.

“We’re in discussions about where to take this project next. I think it’s clear that we’ve got more to do with it – we can make a bigger difference than we imagined. The potential is unreal,” Hunsinger says. “The goal is absolutely to make a difference and to make life easier for our fellow humans worldwide, especially in Syria.”

What Jasper Said is the blogging arm of Jasper – The Word on Columbia Arts, a new written-word oriented arts magazine that serves artists and arts lovers in the Columbia, SC area and its environs in four ways: Via Print Media – Jasper is a bi-monthly magazine, releasing in print six times per year in September, November, January, March, May & July, on the 15th of each month. Jasper covers the latest in theatre and dance, visual arts, literary arts, music, and film as well as arts events and happenings; Via Website – Jasper is an interactive website complete with a visual arts gallery, messages from Jasper, an arts events calendar that is updated several times daily, bite-sized stories on arts events, guest editorials, local music, dance & theatre videos, community surveys, and more; Via Blog – What Jasper Said -- you're reading this now -- is a daily blog featuring a rotating schedule of bloggers from the Jasper staff as well as guest bloggers from throughout the arts community; Via Twitter – Jasper Advises is a method of updating the arts community on arts events, as they happen, with more than a half dozen active tweeters who live, work, and play inside the arts community everyday ~ Jasper Advises keeps the arts community abreast of what not to miss, what is happening when it is happening, and where to be to experience it first hand.
View all posts by Jasper →
This entry was posted in General and tagged #inrefugeeshoes, Catherine Hunsinger, In Refugee Shoes, Rosalind Graverson, Singing Fox Creative, Syria, The Jasper Project. Bookmark the permalink.