In some ways, returning to Raleigh for Hopscotch 2015 felt like catching up with an old friend. This was the festival’s sixth year, and Jasper’s fourth year attending, so much of what the astoundingly dynamic and eclectic festival offered felt comforting, familiar. The convergence of noise artists and rappers, EDM ravers and folkies, metalheads and indie rock tastemakers is what makes this festival tick, with the diversity of its booking and venues locations (ranging from the seedy dive of Slim’s to the posh intimacy of Fletcher Opera House to the, well, festival-esque City Plaza) giving it the kind of distinct character and vibe such undertakings count on.

While talking about the event from year to year is always going to center on a few things focused primarily on the music itself. How did the headliners fare? Godspeed You! Black Emperor delivered a predictably swollen, cinematic head trip of a set that was a welcome counterpart to the opening night’s rain; TV on the Radio proved to be a phenomenal live band adept at bringing art rock to the masses; and Dwight Yoakam was a straight shooter who lets his songs bring the heat.

Who blew the roofs off? Phil Cook & Friends at Fletcher felt like a celebration of everything that makes Hopscotch great as they played his new solo LP Southland Mission from start to finish (check out the amazing video our photographer Thomas Hammond shot below); Working with a dramatically different sets of tools, Lincoln Theater headliners Battles and Pusha T closed out Friday and Saturday nights respectively by putting on workshops on how to own the stage when compared to just about anybody; and Waxahatchee’s  last minute solo set proved just how entrancing some simple, heartbreaking songs and a voice can be.

What new discoveries had us buzzing? The haunting collection of traditional folk tunes by Jake Xerxes Fussell’s debut on Paradise of Bachelors is destined to end up on my year-end favorites list, and I’ll eat my shoe if Raleigh’s electro-R&B act Boulevards and/or upcoming rapper Ace Henderson aren’t making waves nationally by the end of 2016.

But part of what makes Hopscotch great is also what stays mostly the same—the day party traditions that range from the Trekky Records-centered lineups on Saturdays at Pour House to the noisy, avante-garde acts that fill Friday afternoon at King’s, the sprawling outdoor markets and official Hopscotch block parties, and the wonderful vendors and venues in Raleigh that team up to make the festival great from year to year.

What made this year especially memorable for South Carolina attendees, and what will hopefully be added to the list of traditions, is the collaboration between Stereofly, SceneSC, and Free Times that led to two day parties on Thursday and Friday that brought the first significant South Carolina presence to the festival since its inception.

While there have been some token inclusions from the Palmetto State in recent years—acts like Shovels & Rope, Say Brother, and Brian Robert’s Company have all been played official sets in the past, and Keath Mead got an early slot at Tir Na Nog this year—the bounty of North Carolina acts and the dearth of folks from our own music community has always given us pause, particularly when those NC acts benefit from national coverage of Hopscotch. This year was a welcome change.

Settling into the cool, dimly lit confines of Deep South on Thursday for an imitate, story-laden set from JKutchma followed by the haunting songs of She Returns from War and the electrifying country-rock of Say Brother at their sloshy best, even with their mid-afternoon start, was a great start to the festival; even better was the sprawling eclecticism of Friday’s day party at Legends Nightclub. Packed to the gills with mostly-SC acts, highlights included a grand opening from Charleston’s The High Divers, a classic rock-minded indie rock act with impeccable harmonies and a debut LP out 10/9, a fiery, mathy set from recent Post-Echo signees Art Contest, who recently moved from Columbia to Athens, GA, and a seasoned performance the Justin Osborne-led alt-country act Susto, which has been touring hard in recent months, including some opening slots for Band of Horses, Iron & Wine, and Moon Taxi. Recent Jasper centerfold Danny Joe Machado’s performance was another standout, provided a fascinating window into how an unfamiliar audience dealt with the acerbic persona The Restoration has created as a solo act.

More than any one performer, though, what struck me the most about these day parties was a sense of pride in South Carolina, as well as a rare sense of home community in a Hopscotch world where Jasper has always felt like an outsider before. Whereas in prior years “hopping” from set to set would be the norm for day parties as much as it is for the evening sets, we were happy to camp out at Legends all day on Friday, content to revel in our hometown riches before taking in the official schedule.

We can’t praise the folks and bands who put this on enough. It can be hard to see or sense forward movement for a scene, but those few hours on Thursday and Friday felt like something.

Below are some selected photos from the festival by Thomas Hammond: 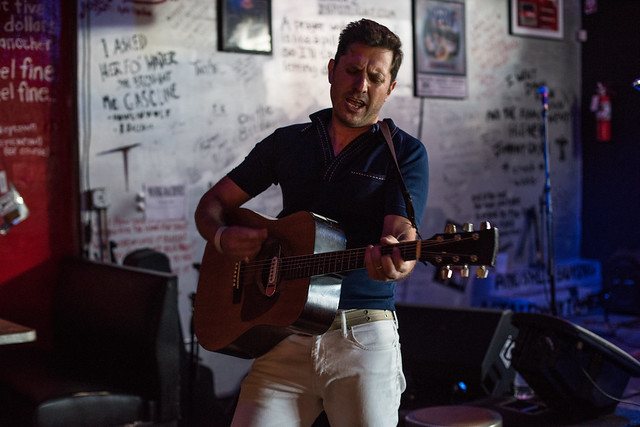 What Jasper Said is the blogging arm of Jasper – The Word on Columbia Arts, a new written-word oriented arts magazine that serves artists and arts lovers in the Columbia, SC area and its environs in four ways: Via Print Media – Jasper is a bi-monthly magazine, releasing in print six times per year in September, November, January, March, May & July, on the 15th of each month. Jasper covers the latest in theatre and dance, visual arts, literary arts, music, and film as well as arts events and happenings; Via Website – Jasper is an interactive website complete with a visual arts gallery, messages from Jasper, an arts events calendar that is updated several times daily, bite-sized stories on arts events, guest editorials, local music, dance & theatre videos, community surveys, and more; Via Blog – What Jasper Said -- you're reading this now -- is a daily blog featuring a rotating schedule of bloggers from the Jasper staff as well as guest bloggers from throughout the arts community; Via Twitter – Jasper Advises is a method of updating the arts community on arts events, as they happen, with more than a half dozen active tweeters who live, work, and play inside the arts community everyday ~ Jasper Advises keeps the arts community abreast of what not to miss, what is happening when it is happening, and where to be to experience it first hand.
View all posts by Jasper →
This entry was posted in General and tagged 2015, boulevards, Charleston, columbia, danny joe machado, dwight yoakam, Free Times, godspeed, hopscotch music festival, jake xerxes fussell, Jasper, jkutchma, kyle petersen, music scene, north carolina, pusha t, raleigh, Say Brother, scenesc, She Returns from War, south carolina, stereofly, the high divers, Thomas Hammond, waxahatchee. Bookmark the permalink.