It’s pretty clear that cats “own” us humans and sometimes revel in ignoring us when we’re baby-talking our best to get their attention. But imagine if the humans were to ignore a cat. And what if that cat were a neglected feline goddess from an idyllic celestial world called Elysian – a world experiencing the dire consequences of its citizens’ emotional neglect. Resolving these conflicts is the premise behind Soda City Cirque’s stunning new show “Finding Elysian.”

“Finding Elysian is about the idea of co-existing worlds and time travel,” company member Kendal Turner explains during a company rehearsal at an Irmo gym. “It’s the case of a missing cat,” Artemis, who has been stolen and carried back to Elysian, where she was the goddess ruler before she ran away, unhappy about being taken for granted. 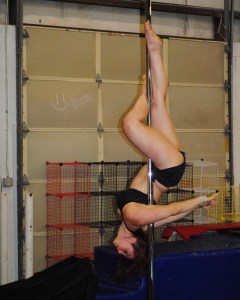 The delightful 90-minute play opens in the laboratory of scientist Tess (played by Kendal). Artemis the cat (played by Rachel Hipszer) plays on the floor while Tess conducts experiments in the hope of finding an alternate world and a vehicle for getting there. It is late, and Tess decides to go to sleep. She soon is awakened by a commotion in the other room, and she finds that Artemis is missing and there is a magic porthole now glowing from her wall. Believing she must be dreaming, Tess steps through the porthole.

What follows is a medley of discoveries accompanied by Elysians performing various vignettes that include fire-handling, trapeze, hula hoop, pole and belly dance, acrobatics, and more. Tess learns her cat’s true identity and that Artemis’s absence has created darkness and tumult where joy and love once resided. Ultimately, Tess joins forces with the Elysians to save Artemis and restore their ailing utopia. 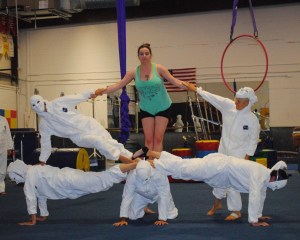 The story is loosely based on the mythical Elysian Fields, which represent paradise or heaven in Greek mythology. “We are 100 percent collaborative,” Kendal says. “Anyone in the group can introduce an idea. … We all come up with the story idea together, and I write the script. Everyone is in charge of the individual pieces that they bring to the show.”

Standout performances abound. As Artemis, Rachel Hipszer is dazzling on an apparatus called the “canes” on which she seems to defy gravity (as cats are known to do). Exemplifying polish and enormous physical strength, she executes a number of amazing moves from a handstand position atop vertical canes. She also later performs a mesmerizing aerialist routine hanging from fabric silks that descend from above. 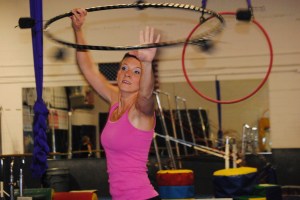 Mike Tanner, who plays Mason, makes spinning plates on a stick look easy. But his pièce de résistance defies imagination. He places three planks separated by spacers atop a single spindle, climbs on top and balances on the constantly rolling contraption while simultaneously maneuvering his body in and out of hand-held hoops. It is, truly, out of this world.

There a number of “firsts” in this – Soda City Cirque’s fourth official performance. “This is the first show when we have had multiple speaking characters,” Kendal says. It’s also the first time Soda City Cirque has had several fire performers on stage all at the same time.

For this performance, the troupe is partnering with Palmetto Place Children’s Shelter and giving free tickets to children from the shelter. “It’s always fun when there are kids in the audience,” Kendal says. “And they get to experience the magic that is live theater.”

As the visionary Gidget, Elizabeth Feretti is hypnotic on the trapeze, epitomizing grace and determination high above the circus floor. As faerie Lenora, Eva Romero captivates the audience with a pole performance that celebrates feminine strength and beauty. As Celeste, Gina Wolfe performs a trapeze-like routine hanging from a hoola-hoop and also carries out an exciting piece with a flaming hoola-hoop while she is flanked by several other fire performers. There really is so much to love in this production.

Kendal is especially proud of the show’s opening act, during which six company members pull off a grand acrobatic performance, creating geometric structures with their bodies.

“We have never done that before, multi-person ‘builds,’” she says. Troupe members are regular people, and most work a full-time day job. “We are all normal people with extraordinary talents. We are normal people with normal bodies.”

It is imperative that the company continually challenge itself. “We have three new members for this show. We are trying a lot of new things. We don’t want to stagnate,” Kendal explains. “In order to get our audience to come back, we have to keep testing ourselves. … Every time we do a show, I worry that no one will come out and see it. Is anyone going to care about this as much as we do?”

In the end, Finding Elysian is about finding balance, living consciously, and celebrating diversity. “For me, it symbolizes the simple act of saying thank you,” Kendal says. “A lot of us don’t take the time to say: ‘I see you; I hear you. Thank you!’”

Finding Elysian will be presented over two consecutive weekends, September 4-5 and September 11-12 at 7:30 p.m. at Conundrum Music Hall in West Columbia. Bring a lawn chair. Tickets are $20 for general audiences and $10 for children under 10. Available for purchase online at http://www.brownpapertickets.com/event/2118879. Find Soda City Cirque on Facebook.

What Jasper Said is the blogging arm of Jasper – The Word on Columbia Arts, a new written-word oriented arts magazine that serves artists and arts lovers in the Columbia, SC area and its environs in four ways: Via Print Media – Jasper is a bi-monthly magazine, releasing in print six times per year in September, November, January, March, May & July, on the 15th of each month. Jasper covers the latest in theatre and dance, visual arts, literary arts, music, and film as well as arts events and happenings; Via Website – Jasper is an interactive website complete with a visual arts gallery, messages from Jasper, an arts events calendar that is updated several times daily, bite-sized stories on arts events, guest editorials, local music, dance & theatre videos, community surveys, and more; Via Blog – What Jasper Said -- you're reading this now -- is a daily blog featuring a rotating schedule of bloggers from the Jasper staff as well as guest bloggers from throughout the arts community; Via Twitter – Jasper Advises is a method of updating the arts community on arts events, as they happen, with more than a half dozen active tweeters who live, work, and play inside the arts community everyday ~ Jasper Advises keeps the arts community abreast of what not to miss, what is happening when it is happening, and where to be to experience it first hand.
View all posts by Jasper →
This entry was posted in General and tagged Elizabeth Feretti, Eva Romero, Finding Elysian, Gina Wolfe, Kendal Turner, Kristine Hartvigsen, Mike Tanner, Palmetto Place Children's Shelter, Rachel Hipszer, Soda City Cirque. Bookmark the permalink.