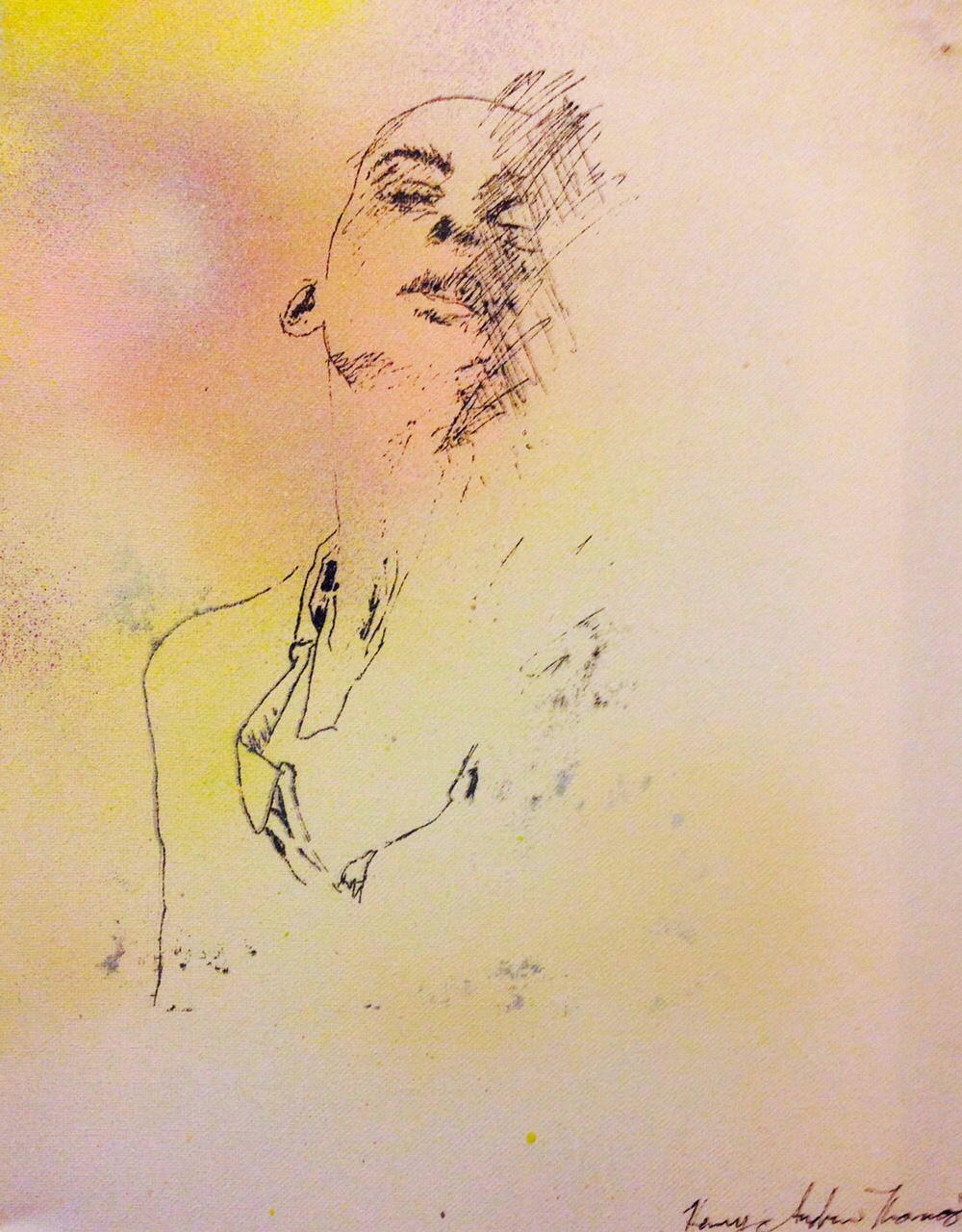 Andrew Thomas has to be honest. He’s a bit drunk—the ideal state for learning what’s at the heart of a man. He’s in Charlotte about to see Primal Scream, one of his favorite bands since he was young. You learn quickly that Thomas is more than a fan of music—he’s a cultivator of sound culture. He’s just as fast to give up the fact that David Bowie resides as an idol in Thomas’ personal pantheon.

This fact gives way to a slight conceit from Thomas. He quotes Bowie—“an artist is someone who thinks their opinion is more important than other peoples.”

The bravado of such imitation is tampered by Thomas’s soft spoken, outward disposition.
In the invisible depths of such a modest individual Thomas is, as he says, “an introverted loose cannon.”

This is the type of atomic word fusing from that unique brand of person who can seemingly coordinate the elements that make the world into what we think of as culturally defining.

For Thomas those elements are skateboards and fine art.

Thomas is a visual artist with the recognition to enjoy such a conceit. While stationed in Columbia, SC he has shown his work primarily in galleries in the major cities up and down the east coast.

He also has a bit more ownership of the title skateboarder than someone who learned a kick flip in middle school, but still rocks a pair of Emerica shoes and a Volcom hoodie on the weekend, sans the deck. Thomas rides for Columbia’s, Bluetile Skateshop, and has been featured in few respected, homegrown skate films.

“I’ve been skateboarding for twenty years this year and I’ve been drawing,” he has to stop and think, “Since I can remember.” The two are Bowie and Ziggy Stardust for Thomas—same thing, different face.

He brought the results of this duel pursuit to a rare showing in Columbia at Bluetile Skateshop where he revealed nine new pieces along with the skateboard visuals that he created for an artisan skateboard producer.

Thomas’s style consists of scrawled out sketches on a canvas dowsed in spray paint and acrylic. While the color and line work may be furiously formed what the pieces show are figurative and representational.

“I find it hard to hold back from all that stuff,” Thomas says about the frenzied process of his work. “I wish it would be more minimal, but I think frantic’s a pretty good word,” he says to describe his art.

The visuals Thomas contrived for the deck are being put to wood by Slapstik Skateboard Art out of Philly. The company creates skate decks on an artisan level, manufacturing a short run of boards that are probably better fit hanging on your wall than sliding down handrails. For now the board is exclusively available for purchase at Bluetile Skateshop and slapstikskateboardart.com

Slapstik is the work of Shawn Beeks, an artist and skateboarder himself. In the company’s original conception it was as an outlet for Beeks’ own artwork.

Recently Beeks expanded to produce more unique items, umbrellas for one, and neckties. He also began reaching out to other artists to create work for his decks.

The idea behind Slapstik is unique—to change the context of the skateboard release, giving it more cultural significance and artistic merit while maintaining accessibility as well as function.

This philosophy made Slapstik and Thomas a perfectly welded fit.

“It’s an accessible way to collect something unique,” Thomas says—an object that can mean more than its functional form but also be respected for the work it can do.

For six months, Thomas locked in a creative rapport with Beeks to produce the kind of aesthetically apt board that Beeks has cultivated for Slapstik. For Thomas, having his art on the bottom of a skateboard is the culmination of a life pushing eight plies of wood on concrete and pushing his own artistic abilities. He’s working towards other goals, he concedes. He wants to show more in Columbia and to simply keep putting himself out there, beyond the east coast possibly.

Andrew Thomas lives by an ability to push further. There’s always a bigger set of stairs to roll away from, coasting on the concrete, always another image to fiercely render on the canvas. Art and skateboarding Thomas says, “They lead you after a while, they end up driving you and your life.”

What Jasper Said is the blogging arm of Jasper – The Word on Columbia Arts, a new written-word oriented arts magazine that serves artists and arts lovers in the Columbia, SC area and its environs in four ways: Via Print Media – Jasper is a bi-monthly magazine, releasing in print six times per year in September, November, January, March, May & July, on the 15th of each month. Jasper covers the latest in theatre and dance, visual arts, literary arts, music, and film as well as arts events and happenings; Via Website – Jasper is an interactive website complete with a visual arts gallery, messages from Jasper, an arts events calendar that is updated several times daily, bite-sized stories on arts events, guest editorials, local music, dance & theatre videos, community surveys, and more; Via Blog – What Jasper Said -- you're reading this now -- is a daily blog featuring a rotating schedule of bloggers from the Jasper staff as well as guest bloggers from throughout the arts community; Via Twitter – Jasper Advises is a method of updating the arts community on arts events, as they happen, with more than a half dozen active tweeters who live, work, and play inside the arts community everyday ~ Jasper Advises keeps the arts community abreast of what not to miss, what is happening when it is happening, and where to be to experience it first hand.
View all posts by Jasper →
This entry was posted in General and tagged Andrew Thomas, Bluetile Skate Shop, Jasper, Jasper Magazine, Shawn Beeks, Slaptik, Travis Bland. Bookmark the permalink.