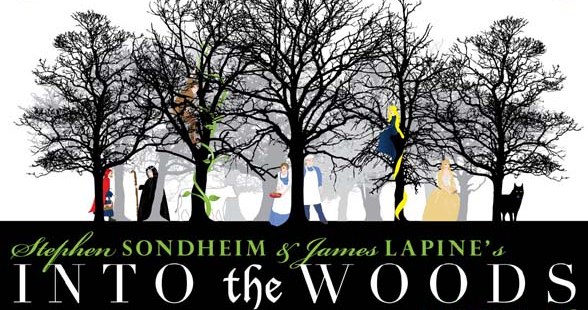 Chapin Theatre Company presents an outstanding production of Into the Woods with music and lyrics by Stephen Sondheim and book by James Lapine at the Harbison Theatre at Midlands Technical College. The musical debuted in 1986 at the Old Globe Theatre in San Diego, followed by a Tony Award-winning Broadway production in 1987. Numerous other versions of Into the Woods have emerged over the years, including Broadway and London revivals as well as the 2014 film adaptation. (This reviewer first fell in love with the musical through the PBS American Playhouse filming of the original stage production. Into the Woods became the first of many musicals I would direct with high school students, and I have fond memories of problem-solving its trickier production demands with energized and optimistic teenagers.) The Chapin Theatre Company succeeds in producing a musical with considerable history through an innovative and fresh approach.

Into the Woods weaves together familiar fairy tales in clever and surprising ways. Key characters are drawn into the woods in pursuit of their dreams and desires: the Baker and his wife seek items needed to lift the Witch’s magic spell and cure their childlessness; Cinderella travels to her mother’s grave for advice on how to attend the prince’s ball; Jack (of eventual beanstalk fame) must sell his beloved cow Milky White in a desperate effort to alleviate his family’s poverty; and Little Red Riding Hood sets out for her grandmother’s house, only to be waylaid by the Wolf. While Act One traces the journey towards wish fulfillment, Act Two takes a darker turn as the characters face what happens after “happily ever after.” As Cinderella sings to a heartbroken Little Red Riding Hood: “Sometimes people leave you, halfway through the wood. Others may deceive you. You decide what’s good.”  Recognition of human imperfection and finding hope amid bleak circumstances provide thematic cornerstones that are as timely now as ever.

Into the Woods has been challenging and moving audiences for decades, and astute director Jamie Carr-Harrington has assembled a top-notch cast for this excellent production.  In the central role of the Baker, Clayton King provides vocal power and emotional connection through pivotal numbers such as “No More,” a poignant sequence with the Mysterious Man (aptly played by Andy Nyland, who is also the appealing Narrator.) Becca Kelly (Baker’s Wife) and Karly Minacapelli (Cinderella) create engaging characters while sharing gorgeous vocal talents.

Catherine L. Bailey triumphs in the complex role of the Witch, communicating both strength and frailty in songs such as “Last Midnight” which is performed as a beguiling lullaby that transforms into a ferocious display of power. Jackie Rowe plays Little Red with depth and compassion, making a role that could easily become a caricature into a highly moving depiction of growing up. After admiring his work on various Columbia stages for years, this reviewer was thrilled to open the program and see Paul Lindley II cast in the role of Jack. Lindley’s vocal energy and magnetic stage presence contribute to a gratifying performance. Nancy Ann Smith delivers a delightful portrayal of Jack’s beleaguered mother.

With Carr-Harrington’s expert guidance, the Chapin Theatre Company scores a major win with Into the Woods. For viewers who think they have already seen this material because they went to the movie version: you really don’t want to miss the opportunity to enjoy this lovely production of a musical treasure by a successful local theatre company in the wonderful Harbison Theatre facility. As the characters sing in the opening prologue, “Into the woods, it’s time to go!”

Into the Woods will be presented by the Chapin Theatre Company at the Harbison Theatre at Midlands Technical College on June 24, 25, 26, and 27 at 8 pm and on June 28 at 3 pm. The theatre is located at 7300 College Street in Irmo, SC.  For more information, visit www.chapintheatre.org.

What Jasper Said is the blogging arm of Jasper – The Word on Columbia Arts, a new written-word oriented arts magazine that serves artists and arts lovers in the Columbia, SC area and its environs in four ways: Via Print Media – Jasper is a bi-monthly magazine, releasing in print six times per year in September, November, January, March, May & July, on the 15th of each month. Jasper covers the latest in theatre and dance, visual arts, literary arts, music, and film as well as arts events and happenings; Via Website – Jasper is an interactive website complete with a visual arts gallery, messages from Jasper, an arts events calendar that is updated several times daily, bite-sized stories on arts events, guest editorials, local music, dance & theatre videos, community surveys, and more; Via Blog – What Jasper Said -- you're reading this now -- is a daily blog featuring a rotating schedule of bloggers from the Jasper staff as well as guest bloggers from throughout the arts community; Via Twitter – Jasper Advises is a method of updating the arts community on arts events, as they happen, with more than a half dozen active tweeters who live, work, and play inside the arts community everyday ~ Jasper Advises keeps the arts community abreast of what not to miss, what is happening when it is happening, and where to be to experience it first hand.
View all posts by Jasper →
This entry was posted in General and tagged Andy Nyland, Ann Baggett, Becca Kelly, Catherine L Bailey, Chapin Theatre Company, Clayton King, Courtney Reasoner, Elizabeth Stepp, Harbison Theatre at Midlands Technical College, Into the Woods, Jackie Rowe, Jamie Carr Harrington, Jasper, Jasper Magazine, Jeremy Reasoner, Joshua Wall, Karly Minacapelli, Kyle Neal, Melissa Ellington, Nancy Ann Smith, Parker Byun, Paul Lindley II, Rachel Glowacki, Ruth Glowacki. Bookmark the permalink.