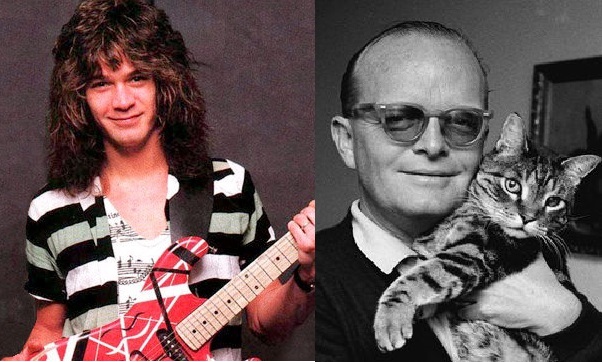 A week ago, a friend and I were sitting in a local tavern, drinking Yuengling, talking literature. Next on his hit list, he told me, was Truman Capote’s landmark true-crime opus In Cold Blood. “It’s a great book,” I said. “You’ll like it. Capote’s got a really interesting style.”

A tough question. How best to describe what makes any author’s style so thoroughly his own? After a pause, I decided to appeal to our shared misfortune of having grown up as music geeks and library junkies. “Truman Capote is the Eddie Van Halen of the written word,” I said.

I had hoped it would be a sufficient enough answer that no more explanation would be necessary, but it was not to be.

I leaned back in my chair, winding up for what promised to be an exercise in garbled, nonsense theorizing. Instead, I surprised myself with how much sense my response actually made (at least to me, and at least at the time.) “Alright,” I said. “Eddie’s an amazing guitarist, right? A virtuoso. The sounds that come out when he puts his fingers to the strings could come only from him. It’s like listening to an alien trying to communicate with a Midwestern 4-H club. Capote’s the same way. He’s a demon on the typewriter. Where Eddie’s licks demonstrate an almost manic infatuation with the possibilities of his chosen art form, Capote’s stuff could only have been written by someone who has dedicated his life to the aesthetics of serious prose and the pursuit of the perfect sentence.”

My friend nodded slowly and eyed me sideways. “There’s a but.”

“There is a but,” I said. “But, that’s just it. It’s only aesthetics. Both men represent the performative pinnacle of their respective mediums. For all of their talent, it’s still just a show. It’s ‘look-what-I-can-do.’ With a few exceptions, there’s an emptiness at the heart of what they do. A deficiency of soul.”

He seemed to understand completely. “Oh, okay. That makes sense.” He took a long drink. “I’m still going to read the book.”

“Of course you should still read the book.”

From there, talk moved easily and rightfully on to other things, but questions began to gnaw at me. Was I right in my comparison? Was it too simplistic to be useful to anyone but my friend and me? And could this template be used to explain the relationships between other word- and axe-slingers? I couldn’t ignore the possibilities and journalistic importance of such an endeavor. So, what follows—in the interest of public service and writerly responsibility—is a brief rundown of renowned authors and their guitar hero counterparts. The list is by no means complete, but it’s a good start at cracking the shell surrounding perhaps one of the greatest non-mysteries of our time: Can our literary tastes explain our musical leanings and vice versa? (Note: The previously mentioned exceptions to the Capote-Van Halen hypothesis are also provided below.)

Ernest Hemingway = Johnny Ramone: This one should be fairly obvious. Ramone is a paragon of six-string efficiency. No excess, no fluff, no showing off. Likewise, Hemingway made it nearly impossible for anyone to write in lean, declarative sentences without betraying the Old Man’s influence. Johnny viewed lead playing and solos the same way Hemingway viewed subordinate clauses—a masturbatory frivolity to be deployed only in the most desperate moments; i.e., to communicate climactic prosaic intensity or when Phil Spector is waving a revolver in your face.

“He went over and sat on the logs. He did not want to rush his sensations any.” – “Big Two-Hearted River”

“Judy is a Punk” – The Ramones

Kurt Vonnegut = Joe Walsh: Like everyone else in 1975, the Eagles knew they did not rock. Enter Joe Walsh, an insatiable party monster who brought a sense of roguish mayhem to the most milquetoast band in the world. Like Walsh, Kurt Vonnegut took his fun seriously, and this approach was key. It allowed both men to produce work that was imbued with their drunk-uncle-at-the-reunion personas, dropping nuggets of humanist wisdom and lyrical throwaways just goofy enough to flirt with profundity. Walsh did for the Eagles what Vonnegut did for science fiction, injecting a much-needed sense of play into a staid and self-important institution.

“Life’s Been Good” – But Seriously, Folks…

Charles Dickens = Eric Clapton: Both Clapton and Dickens boast massive bodies of work that have garnered heaps of critical and commercial success. Both possess undeniable talent and perhaps even mastery of their chosen instrument. Both enjoy comfortable elder statesman status and are now required reading/listening for any student of either medium. And both are so dull as to induce comatose drooling and lethargy for which a strong enough accelerant has yet to be synthesized. But they’re not anesthetizing across the board. Mercifully, Clapton has written a small handful of tunes so stellar they justify his entire career (“Layla,” “Bell Bottom Blues”) and Dickens created the most iconic, entertaining character in the admittedly slim pantheon of holiday-themed literature (Ebenezer Scrooge.) The lesson here is that talent can get you far, but resting on your laurels can spell a social legacy of doom.

Hunter S. Thompson = Lou Reed: Lou Reed and Dr. Thompson have more in common than just a love for popping speed like Skittles, though that’s certainly part of the equation. Above anything else, these men were chroniclers—Reed of the strung-out, sexually uninhibited New York City underground freak culture, and Thompson of the perversions and hypocrisies hidden beneath everything from the Kentucky Derby to a presidential campaign. They each saw something in the American character that demanded to be explored and, if the temperature didn’t match the room, exposed. Thompson’s literary style, whether he’s working out some form of reasonable journalism or flights of hash-addled fantasy, is marked by a tendency for digression that doesn’t take anything away from the greater point he’s making; in fact, it’s from these moments that some of his most clear-headed wisdom emerges. Reed shares this meandering tendency. The Velvet Underground were a musical watershed, but what gets so often overlooked is that they might well have been the first serious drone rock band, and these droning side paths were the foundation of some of Reed’s strangest and best moments. The guitar solo in “Pale Blue Eyes,” for example, sounds so odd that it might not even be in the proper key, but somehow that dissonance wraps the song into the neat little package it’s supposed to be. If the solo in a love song feels wrong, it could be because the song’s creator is making a statement about love itself.

See: Fear and Loathing: On the Campaign Trail ‘72

Truman Capote = Eddie Van Halen: I may have accused Capote of a ‘deficiency of soul,’ and that’s for the most part true. But read this:

“Only hypocrites would hold a man responsible for what he loves,

emotional illiterates and those of righteous envy, who, in their

agitated concern, mistake so frequently the arrow pointing to

heaven for the one that leads to hell.”  –Other Voices, Other Rooms

This line is so good it makes my earlier claim seem really ridiculous and sort of smug. As for Eddie, there’s little evidence that he is anything more than a mind-blowingly talented robot.