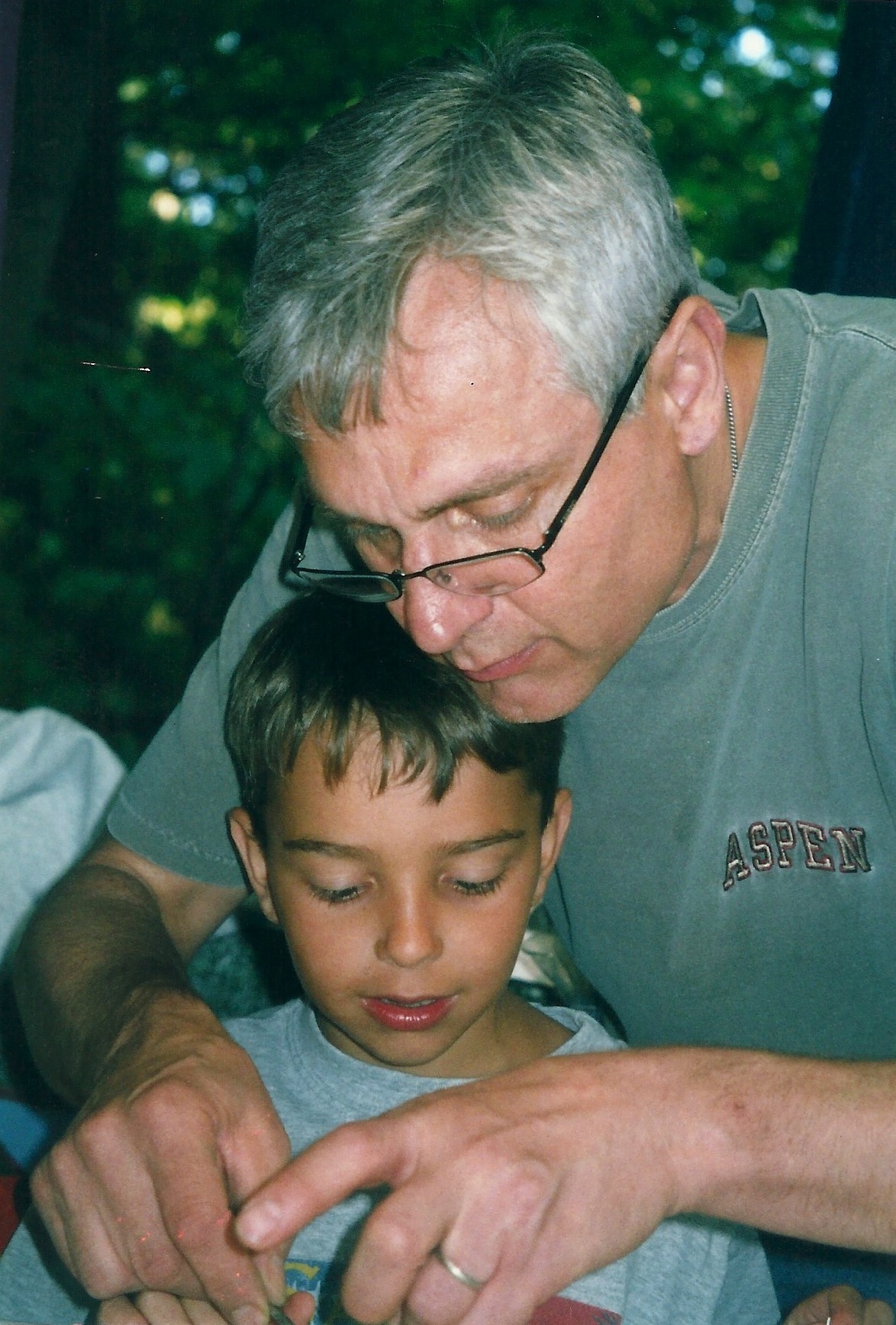 The breakthrough for the ceramic sculptures for which Columbia artist Peter Lenzo now is known nationally came in 2000 from his then four-year-old son Joe. Lenzo was making face jugs steeped in Southern tradition when his son asked whether he could stick all kinds of stuff into Lenzo’s ceramic heads. He could and in the process set his father on a course that would result in highly embellished, at times frightening ceramic figures and faces adorned with found and created objects sticking in and out of bodies and faces that are at times unrecognizable as the face jugs from which they originate. The adornments range from ceramic shards to found or purchased porcelains dolls, animals, pipe heads, trains, shoes, roosters or Virgin Mary statues and snakes, leaves, sticks and other things that Lenzo makes himself.
For its June exhibition, if ART Gallery will show 22 ceramic sculptures that Lenzo and his son, the now 19-year-old Joe Scotchie-Lenzo, created together in 2000–2002. The exhibition, Peter Lenzo & Joe Scotchie-Lenzo: Origins 2000–2002, will open June 5 and run through June 27. The opening reception is Friday, June 5, 6 – 9 p.m. A gallery talk by Lenzo and Scotchie–Lenzo will be Saturday, June 20, 2:00 p.m. The exhibition will be accompanied by a catalogue.

“I made my dad famous,” Scotchie-Lenzo used to say about his dad.

“He started saying that right away,” Lenzo says. In truth, Lenzo already had a considerable reputation with other kinds of work – cabinet-like altarpieces filled with found objects and personal mementos. But in the late-1990s, Lenzo no longer could make such pieces as brain damage from a bicycle accident in his youth had caught up with him, and he increasingly suffered from seizures. Working with a table saw and other power tools to create the altars was an accident waiting to happen. As a result, Lenzo had switched to clay exclusively, making Southern-style face jugs. While Lenzo loved making traditional face jugs, he also worried about abandoning the fine art world from which he came. The new work inspired by his four-year-old bridged the gap. “Working with Joe gave me a direction to go in when I didn’t know where to go. I wouldn’t say Joe made me famous, but he made me sane.”
Peter Lenzo (b. 1955) is a widely recognized ceramic sculptor with a national profile. The New York City native, who grew up in Detroit, was selected for the 1995 and 1998 South Carolina Triennial exhibitions at the South Carolina State Museum in Columbia; the 2011 exhibition Triennial Revisited and the 701 CCA South Carolina Biennial 2011 and 2013, all at 701 Center for Contemporary Art in Columbia; and Thresholds, a 2003 exhibition of Southeastern art dealing with religion and spirituality that traveled extensively throughout the Southeast.
Lenzo’s work is in several museum collections, including at the South Carolina State Museum, the Mint Museum in Charlotte, N.C., and the Renwick Gallery at the Smithsonian Museum in Washington, D.C. His solo exhibitions include those at the Spartanburg (S.C.) Museum of Art, the European Ceramic Work Center in Den Bosch, The Netherlands, Great American Gallery in Atlanta and Ferrin Contemporary gallery in Massachusetts.

Lenzo and his work have been featured in numerous books, exhibition catalogues and articles about ceramic sculpture and Southern art. They include the Threshold catalogue, 500 Figures In Clay (2005), Robert Hunter’s Ceramics in America (2006) and Poetic Expressions of Mortality: Figurative Ceramics From the Porter–Price Collection (2006). He holds an MFA from Wayne State University in Detroit and used to teach at the University of South Carolina, Columbia.
Joe Scotchie-Lenzo (b. 1996) has been making and selling ceramic sculptures off and on since he was four years old, although he hasn’t produced any in three years. One co-production with his dad is in the collection of the Smithsonian’s Renwick Gallery. One of his individual works is in the South Carolina State Museum collection. Scotchie-Lenzo is a native and resident of Columbia, where he is a business major with an interest in retail and clothing at the University of South Carolina.

What Jasper Said is the blogging arm of Jasper – The Word on Columbia Arts, a new written-word oriented arts magazine that serves artists and arts lovers in the Columbia, SC area and its environs in four ways: Via Print Media – Jasper is a bi-monthly magazine, releasing in print six times per year in September, November, January, March, May & July, on the 15th of each month. Jasper covers the latest in theatre and dance, visual arts, literary arts, music, and film as well as arts events and happenings; Via Website – Jasper is an interactive website complete with a visual arts gallery, messages from Jasper, an arts events calendar that is updated several times daily, bite-sized stories on arts events, guest editorials, local music, dance & theatre videos, community surveys, and more; Via Blog – What Jasper Said -- you're reading this now -- is a daily blog featuring a rotating schedule of bloggers from the Jasper staff as well as guest bloggers from throughout the arts community; Via Twitter – Jasper Advises is a method of updating the arts community on arts events, as they happen, with more than a half dozen active tweeters who live, work, and play inside the arts community everyday ~ Jasper Advises keeps the arts community abreast of what not to miss, what is happening when it is happening, and where to be to experience it first hand.
View all posts by Jasper →
This entry was posted in Columbia, if ART, Jasper Magazine, Peter Lenzo, Visual Arts and tagged if ART, Joe Scotchie-Lenzo, Peter Lenzo. Bookmark the permalink.