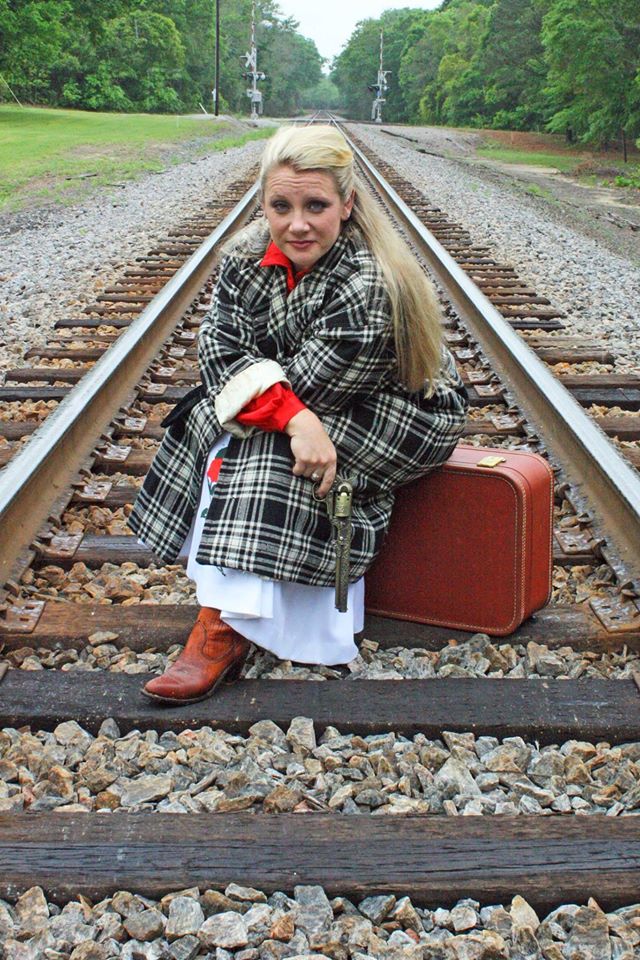 After the original version’s success in 1946, a Tony Award-winning revival of Annie Get Your Gun (with libretto revised by Peter Stone) opened on Broadway back in 1999, starring Bernadette Peters and Tom Wopat. As a graduate student living in New York City at the time, this reviewer was pleasantly surprised by the complexity of a fictionalized depiction of celebrated sharpshooter Annie Oakley’s success in Buffalo Bill’s Wild West show and her romance with star Frank Butler. Any self-respecting musical theatre kid grows up to be familiar with numbers like “There’s No Business Like Show Business” and “I Got the Sun in the Morning.” Yet Annie Get Your Gun offers more than toe-tapping favorites, with a challenging book that provokes questions about treatment of Native Americans and considers the nuances of gender roles in professional and personal relationships.

As produced by Village Square Theatre, Annie Get Your Gun (music and lyrics by Irving Berlin, book by Herbert and Dorothy Fields as revised by Peter Stone, and orchestrations by Larry Moore) succeeds on multiple levels. From the sprightly, inviting opening number to the vibrant finale, Annie Get Your Gun is sure to please longtime fans of the musical along with audience members who are new to the show.

In the pivotal role of Annie Oakley, Candice Pipkin proves a formidable comedienne with a gorgeous voice. Pipkin captivates the audience as she balances homespun hijinks with tender sincerity, a key factor in realizing Annie’s character. She is a performer of great charisma and endearing pluck, just right for the indefatigable Oakley. Pipkin’s enchanting strength as both an actor and a vocalist emerges in dynamic numbers like “You Can’t Get a Man with a Gun” as well as poignant songs such as her exquisite rendition of “I Got Lost In His Arms.”

With the appealing Chris Kruzner in the role of Frank Butler, Pipkin shares lovely vocals punctuated by comedic mischief in entertaining numbers like “The Girl That I Marry,” “An Old Fashioned Wedding,” and “Anything You Can Do.”

Talented director Debra E. Leopard collaborates with a valuable production team, including Becky Croft (Executive Producer), Matt Marks (Technical Director), and Stephanie Nelson (Stage Manager). Camille Jones provides expert musical direction, and the band members (Jones, Jim Hall, and Eddie Bird) bring Berlin’s beloved songs to life with flair. Not only do Hanna and Pipkin play lead roles, they also function as choreographers (with Jeff Lander), crafting a variety of crowd-pleasing dance numbers, including “I’ll Share It All With You” and “Who Do You Love, I Hope.”

The large cast is costumed beautifully by Nancy Huffines and Heidi Willard. Clever set designs work effectively to convey numerous locations, from a steam train to a cattle boat to the Hotel Brevoort, with various other stops in between. Ensemble members collaborate on fluid and efficient scene changes, particularly impressive with a show of this scope and size.

Led by the extraordinary star power of Pipkin, the Village Square cast and production team have achieved an enjoyable production of Annie Get Your Gun. (Audience members with younger children will want to be aware that the show includes some mild language and a few suggestively racy moments.) Performances will take place on May 15 and 16 at 7:30 pm and May 16 and 17 at 3:00 pm. For tickets and more information, contact 803-359-1436 or visit www.villagesquaretheatre.com.

What Jasper Said is the blogging arm of Jasper – The Word on Columbia Arts, a new written-word oriented arts magazine that serves artists and arts lovers in the Columbia, SC area and its environs in four ways: Via Print Media – Jasper is a bi-monthly magazine, releasing in print six times per year in September, November, January, March, May & July, on the 15th of each month. Jasper covers the latest in theatre and dance, visual arts, literary arts, music, and film as well as arts events and happenings; Via Website – Jasper is an interactive website complete with a visual arts gallery, messages from Jasper, an arts events calendar that is updated several times daily, bite-sized stories on arts events, guest editorials, local music, dance & theatre videos, community surveys, and more; Via Blog – What Jasper Said -- you're reading this now -- is a daily blog featuring a rotating schedule of bloggers from the Jasper staff as well as guest bloggers from throughout the arts community; Via Twitter – Jasper Advises is a method of updating the arts community on arts events, as they happen, with more than a half dozen active tweeters who live, work, and play inside the arts community everyday ~ Jasper Advises keeps the arts community abreast of what not to miss, what is happening when it is happening, and where to be to experience it first hand.
View all posts by Jasper →
This entry was posted in General, Jasper Magazine, SC Theatre and tagged Annie Get Your Gun, Brian Andrews, Candice Pipkin, Chris Kruznew, Jasper, Jasper Magazine, Melissa Hanna, Mellisa Ellington, Village Square Theatre. Bookmark the permalink.

One Response to Review: Annie Get Your Gun at Village Square Theatre by Melissa Ellington