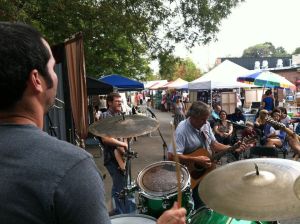 The phrase “ragged but right” has been used countless times to describe any number of bands with more heart and spirit than skill and discipline.

But rarely has a group taken it  as much as an article of faith as Tom Hall & the Plowboys.

Although they are hardly a band lacking chops or extensive musical training, with more than six records and countless live shows under their belts, the band has worked its way through folk operas and film soundtracks, long digressions into blues, zydeco, and alt-country, and rarely have they sounded like anything has gone entirely according to plan.

Gravity & Willpower, which is album number six for this rotating cast of characters, is in many ways a distillation of so many of the precepts that Hall has led the group with. Featuring longtime members like Andrew Hoose (drum), Bill Stevens (bass), Phil Hurd (fiddle) and David Lee Michelson (guitar) alongside some members who have fallen in along the way like Chris Lawther (banjo), Bert Cutts (trumpet), and guest instrumentalist Adam Cullum (accordion and piano), the ramshackle outfit cut a dozen songs over four hours, with minimal rehearsal and forethought. The result, predictably, can be a little rough and gritty, but these are songs that lean heavily on the timeless tropes of old-timey music, with ambling and meandering solos that feel entirely of the moment — largely because they were created and conceived that way. And while Hall may not be a perfect singer by any stretch, his grizzled baritone and spirited delivery are indomitable, driven by, as the title suggests, “gravity and willpower” more than anything else.

While the Plowboys may not be for everyone, it’s hard to totally reject the obvious and infectious joy these musicians bring to their restless and ramshackle jams, and a party can never be far away when these guys are playing. What’s more, over the last 14 years as a band, they’ve come to represent something about the wild, wacky, heartfelt, and joyous vibe of Columbia in a way I can never quite explain.

The listening party for the album is this Wednesday, January 7th, at the Whig. Come and listen, and join these fellow ne’er-do-wells for a drink. -Kyle Petersen