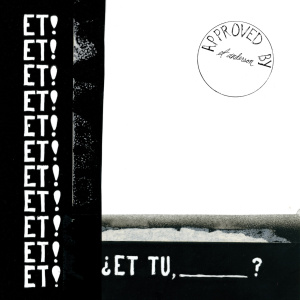 Almost as soon as ET Anderson announced their formation, its recorded debut became one of the most anticipated local indie rock records of 2014. Band mastermind Tyler Morris did great work in the Pavement-esque Calculator prior to joining up with Raleigh’s Octopus Jones, where his slashing guitar work and dry, terse songwriting did wonders as a complement to the bandleader Danny Martin’s funky, New Wave-inspired romps. When he split from that group and returned to Columbia earlier this year, he quickly assembled an extraordinarily talented group of players to back him for his new project, which made its first broad debut at this year’s Jam Room Music Festival.

Whether this seven song recording, written and performed almost entirely by Morris, lives up to the hype will largely depend on what you make of his approach, though, for Et tu is all about taking chances, letting instruments float at-times beautifully and at-times dissonantly in and out of the picture while testing the limits of the rhythmic pocket which most rock and roll depends on. The one-two opening punch of “It Don’t Even” and “I Do Not Mind” sees the bass line teasing a groove playfully rather than laying it down straight while alternating between twinkling guitar licks and Malkmus-esque distortion. The only thing seemingly holding it together are the drums, with who lots of fills and stops thrown into the mix that provide the momentum for songs that feel like they are near sinking under the weight of the rest of the composition’s playful experimentation. Things only get slightly more standard from there, as keyboards parts create an otherworldly aura for much of the record but also provide a surprising organ-style body to many of the songs, particularly to great effect on “Acid Earlier / Love Thy Neighbor,” the tune which comes closest to the charging spree of Octopus Jones. The fact that Morris plays almost all of these instruments himself is a dizzying feat given the dramatic range of styles and approaches that come together across these eclectic compositions.

Still, it’s the latter half of the EP that the project at its most winsome, with ballads like “Things You’d Do,” “Legs,” and “It’s Not the Same” capturing the warped beauty of peak-era Yo La Tengo. Like the sound pioneered by that seminal group, ET Anderson is attempting to combine noisy experimentation, pop sensibilities, and a sense of adventure in a way that defies the predictable and, at times, ease of access. Also like that band, their ambition might involve a few missteps and dead-ends, but the very kinds of missteps and dead-ends which can be so fascinating and delightful precisely because the process itself is so revelatory. As much as this EP falls short in some ways, it also leaves you impatiently waiting to hear what’s coming next.

Note: In the print version of this review (published in the November/December 2014 issue of Jasper), a significant number of mistakes were made involving musician credits on this project. This updated review more accurately reflects the creative process for the record.