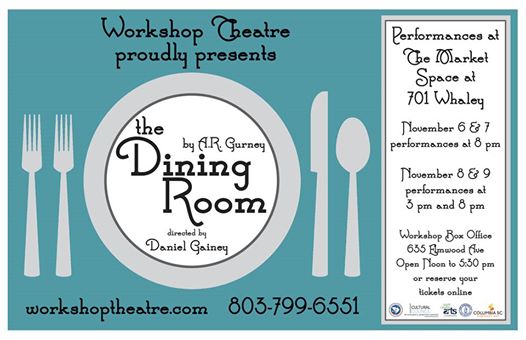 “The trouble is, we’ll never use this room. . . The last two houses we lived in, my wife used the dining room table to sort the laundry.”

So says a modern home buyer during the first scene of A. R. Gurney’s The Dining Room, a series of vignettes that take place in an upper-middle-class dining room throughout several time periods. As someone whose formal dining room has been converted into a home office, I can relate to the home buyer in the play. Dining rooms are practically obsolete these days, right? However, Gurney’s play reminds us that there was a time when they were the center of family life. The decline of the dining room coincides with the weakening dominance of the “WASPs of the Northeastern United States.” Gurney alternates between satirizing this “vanishing culture” and showing nostalgia for it. Ultimately, though, the play is less concerned with documenting a specific society, and more concerned with presenting universal snapshots of human life.

Workshop Theatre’s production, directed by Daniel Gainey, uses six actors to portray over fifty characters.  It is a true ensemble show, so all of the actors remain visible onstage the entire time. The minimalist set by Richard Király consists of a single wall covered with picture frames, which are left empty so that we can imagine decor suitable for each household and time period depicted in the play.  There are no props–nearly everything is mimed.  Six high-backed wooden dining room chairs are the only furniture pieces.   I expected a table; however, Gainey’s decision to leave the table to the imagination is smart because it allows for more flexibility with blocking, keeping the show visually interesting.

The versatile cast includes Hans Boeschen, George Dinsmore, Samantha Elkins, Ruth Glowacki, Emily Padgett, and Lee Williams. The actors wear unobtrusive black clothing, relying solely on physical and vocal characterization to differentiate their parts. The show’s only costume piece is an apron that signifies servant status (all of the women play maids at some point). Each actor plays a variety of ages, from stern grandparents to excitable young guests at a birthday party.  The actors are especially effective when they play children; during the birthday scene, they burst with giddy energy, but try hilariously hard to contain it so they can placate the adults and receive their cake. Other notable acting moments include Boeschen and Elkins’ utter certainty that their family’s future is at risk because of a single remark someone made at their country club, and Glowacki and Dinsmore’s strong chemistry that develops while their characters crawl around on the floor (don’t ask.)

The show’s most touching vignette occurs at the end of the first act. Padgett plays an elderly woman who struggles with dementia and cannot recognize her own family during Thanksgiving dinner. Padgett masterfully portrays the woman’s attempts to overcome her confusion and hold on to her train of thought. The woman’s most devoted son (played by Williams) tries every method he can possibly think of to help her remember, and his refusal to give up is heartbreakingly beautiful.

In a play with so many separate stories, some are bound to be more engaging than others. Most of my favorite scenes happened during the first act, so the second act seemed to pass more slowly for me. Luckily, if a particular scene fails to catch your interest, you can rest assured that a completely different scene will replace it soon enough. With a running time of about two hours (including intermission), the show is not too long.

My only real complaint about this production is the fact that the actors never exit the stage even when their characters temporarily leave the dining room. In such instances, the actors just walk upstage, turn around, and stand stiffly until it is time for them to re-enter the scene. This situation becomes awkward when the actors have “offstage” lines, which they deliver while remaining rigidly still and facing backward. I would have been less distracted if the actors in question had simply exited the stage for a short time. I think Gainey was perhaps overly committed to the concept of keeping all the actors visible the entire time. However, this scenario only occurs a couple of times throughout the play, so it’s not a big deal.

On the whole, Workshop’s production of The Dining Room is a success. Gainey makes an admirable directing debut, and he has selected a cast of actors who are game to try anything. Watching them play with the material is a treat.  The Dining Room runs through this Sunday, November  9, at The Market Space at 701 Whaley, with evening performances at 8 PM Friday, Saturday and Sunday, plus matinee performances at 3 PM on Saturday and Sunday.  Visit http://www.workshoptheatre.com/TheDiningRoom.html or call (803) 799-6551 for more information.