November is  National Native American Indian Heritage Month, with plenty of events and educational opportunities available locally throughout the month to honor and celebrate native culture and history.

National American Indian Heritage Month is celebrated every year in November to honor and recognize the original people of this land.   Established nationally in 1990, this commemorative month aims to provide a platform for native people in the United States of America to share their culture, traditions, music, crafts, dance, and ways and concepts of life. This gives native people the opportunity to express to their community, both city, county and state officials their concerns and solutions for building bridges of understanding and friendship in their local area. Local, municipal, federal and state agencies are encouraged to provide educational programs for their employees regarding Native American history, rights, culture and contemporary issues, to better assist them in their jobs and for overall awareness. National American Indian and Alaska Native Heritage Month takes place each November and is a great way to celebrate the traditions and cultures of the first Americans. Today, American Indians comprise 2.3 percent of the U.S. population. Their buying power in 2014 is 156 percent greater than in 2000, and is expected to grow to $148 billion by 2017.For more information, visit http://nativeamericanheritagemonth.gov/about/.

South Carolina is home to the Catawba Indian Nation, the only federally recognized nation, and twelve recognized tribes & groups, representing over 43,000 people of Native descent according the 2010 US Census. These tribal communities are all “body politic,” and preserve their distinctive culture, heritage and history in South Carolina. 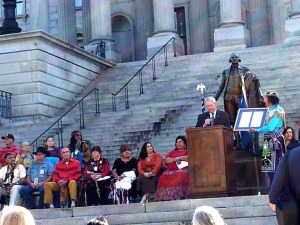 State government officials and Native American Indian leaders will  gather at the State House on November 18 from 12 -1 PM  to celebrate the 2nd Native American Awareness Day in South Carolina, in conjunction with the local and national observance of National Native American Indian and Alaskan Native Heritage Month. There will be drumming, Native songs, a traditional flag ceremony,  the reading of the Proclamations and H-Bill 3746 proclaiming this day, plus leaders from tribes and groups will speak and introduce their tribal communities’ history to the general public.  For more information, visit http://cherokeeofsouthcarolina.com/advocacy-AwarenessDay.html

Eastern Cherokee, Southern Iroquois, and United Tribes of South Carolina, Inc.  is an organization that works to promote  self-determination, civil rights, religious freedoms, education, history, culture, and the arts of Native people. ECSIUT is a nonprofit that serves federally recognized American Indian and Alaska Natives and “state status” Native American Indian people, and is also a tribally based intertribal consortia. 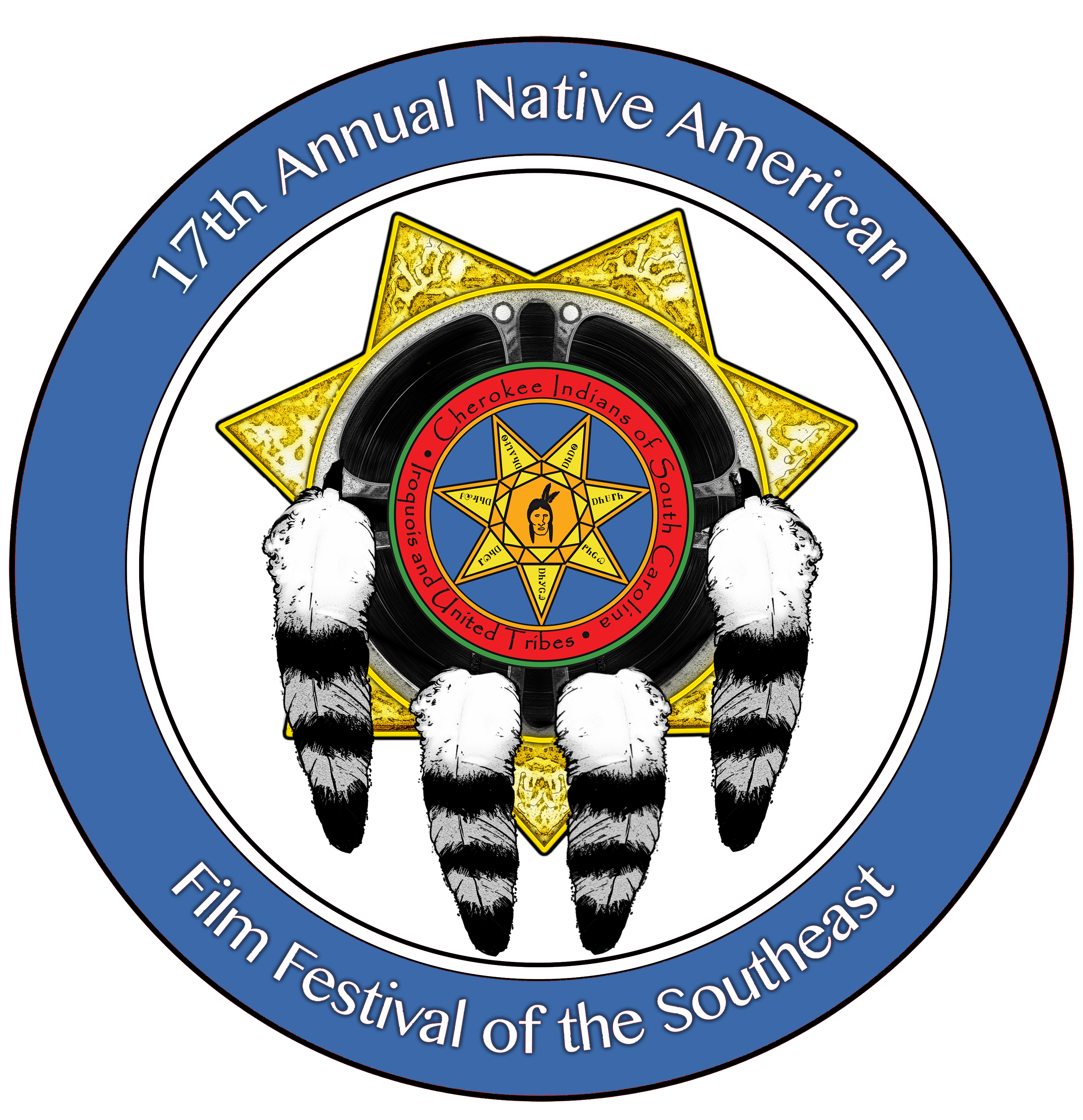 Also beginning on November 18, Columbia once again plays host to  the  17th Annual Native American Indian Film Festival of the Southeast, a community-based event which aims to present the richness and variety of indigenous cinematic expressions. The festival is a time to educate the public  about contemporary Native American talent and issues, Native themed documentaries, and to discuss film and the power it has to tell Native stories by Native people (and to entertain.) 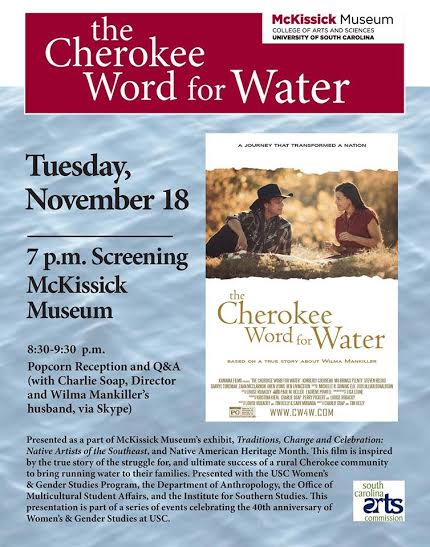 A screening of The Cherokee Word for Water, last year’s festival winner, will take place at 7 PM at USC’s McKissick Museum, followed at 8:30 PM by a reception and talkback session with the film’s director, Charlie Soap.  This year’s films will be shown at Tapp’s Art Center starting at 6 PM on November 20 and 21, and at Conundrum Music Hall on November 23 beginning at noon. There will also be programming at Main Street’s Nickelodeon on November 24.

The Mayan Connection: Lost Legacy of Southeast,  directed by  Antara Brandner, who will be attending the Festival for talkback sessions

Between Hell and a Hard Place, directed by Jaysen P. Buterin   (also attending) 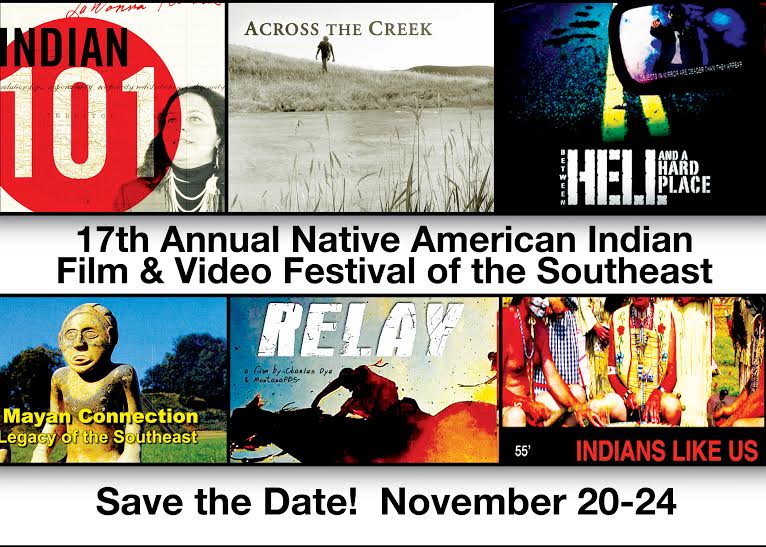 For more information on the film festival, visit   http://cherokeeofsouthcarolina.com/Film-Festival/index.html .

Additionally, the McKissick Museum is hosting a year-long exhibition,  Traditions, Change & Celebration: Native Artists of the Southeast, which features 150 pieces of Native American Indian handcrafted art, from 75 artists in nine states, representing over 25 distinct Native American Indian tribal nations and cultures,    including the Cherokee, Choctaw, Chickasaw, Creek, and Seminole.  Also featured are  Pamunkey Indian Pottery from Virginia, art from the Poarch Band Creeks, the basketry of John Paul Darden of the Chitimacha Indians of Louisiana, and pottery by Bill Harris of the Catawba Indian Nation.  For more information on this exhibition, visit http://artsandsciences.sc.edu/mckissickmuseum/traditions-change-and-celebration-native-artists-southeast, and for a list of events taking place locally, visit http://www.sa.sc.edu/omsa/american-indian-heritage-month-2014/.