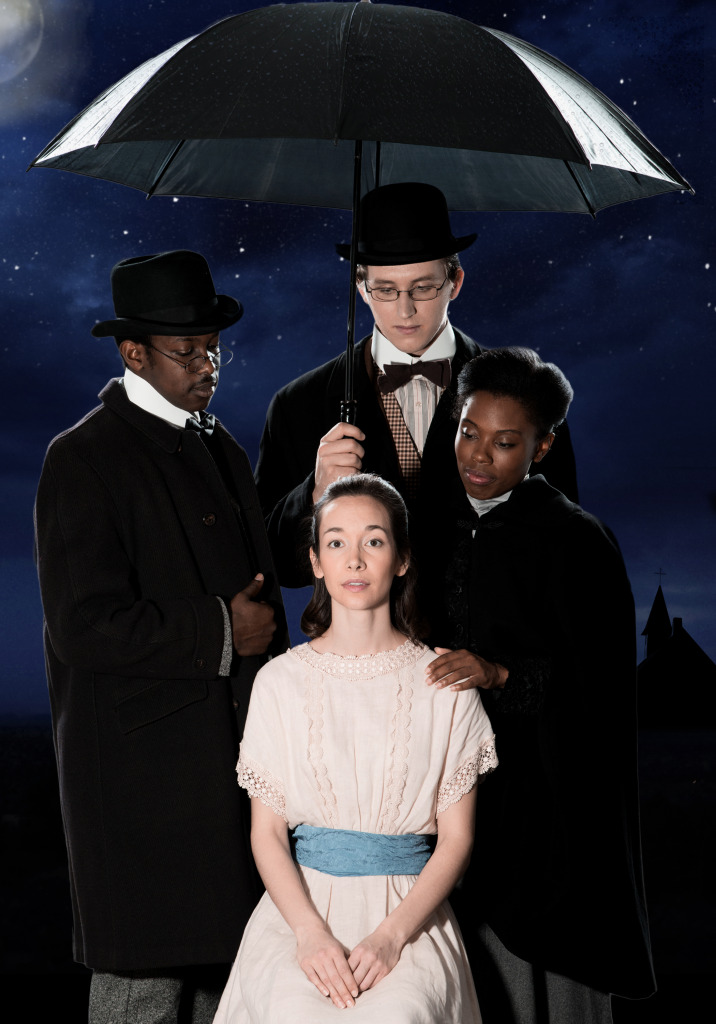 Show times for Our Town are 8pm Wednesdays through Saturdays, with additional 3pm matinees on Sunday, November 16 and Saturday, November 22.  Tickets for the production are $12 for students, $16 for USC faculty/staff, military personnel and seniors 60+, and $18 for the general public.  Tickets can be purchased by calling 803-777-2551 or by visiting the Longstreet Theatre box office, which is open Monday–Friday, 12:30pm-5:30pm, beginning Friday, November 7.  Longstreet Theatre is located at 1300 Greene St.

Thornton Wilder’s beloved script was described by playwright Edward Albee as “the greatest American play ever written.” Through Wilder’s artfully simple prose, we are transported through a timeless, quintessentially American experience, as young George and Emily meet, fall in love and marry. While we share in their journey, we find ourselves witnessing a full life cycle — from childhood to adulthood, and, ultimately, the grave. Wilder’s beloved, Pulitzer Prize-winning drama opens our eyes to all we take for granted — the beautiful small details of everyday existence in a world “too wonderful for anybody to realize.”

Wilder’s play was especially radical when it premiered in 1938, says director Steven Pearson, a theatre professor and head of the university’s graduate acting program.  The playwright insisted that productions be mounted with extremely minimal scenic design — usually only two ladders and a few chairs — and employed the then-unique practice of “breaking the fourth wall,” or having the play’s characters communicate directly with the audience.

The play’s moving depictions of the beauty of ordinary existence have been praised since its original production.  Critic Brooks Atkinson called the play “hauntingly beautiful” in his 1938 New York Times review, adding that the playwright “has transmuted the simple events of human life into universal reveries.”

“Essentially what Wilder talks about in this play is that every day living is life,” says Pearson.  “People don’t live just so they can get to the point where something big happens.  It’s kind of a zen play in that sense.”

Pearson sums up this production just as simply.  “It’s radical, it’s funny… it will be well-acted and well-designed.  And if you’ve seen it before, come see it again — you’ll find something new about something important.  It’s like Shakespeare — the more we work on it, the more we find.”

Featured in the production are the theatre program’s first-year Master of Fine Arts in Acting students, who have all been working in theatres around the country for the last few years.  “They’re terrific,” adds Pearson.  “Professional people who have come back to school to just get stronger.”

In addition to directing, Pearson is also creating the sound design for the production, which he says will work toward sparking the audience’s imagination while completing the musicality of Wilder’s text.  Scenic design graduate design student Neda Spalajkovic is developing an innovative set which allows for the spareness of Wilder’s original concept while giving just the right detail to paint the locale of his fictional town of Grover’s Corners, New Hampshire.  Valerie Pruett, a senior costume and make-up design instructor, is creating the early twentieth century fashions for the play.  Undergraduate theatre student Ashley Pittman is helming the play’s lighting design.

The enduring message of Our Town remains universal, says Pearson.

“We are so ‘end’ or consumer oriented in our society, that we think of the time of our life as getting ready for the next ‘important’ thing,” he explains.  “But, if we do that, then we’re missing the point because the only thing we have is the time of our life.  That’s all we have.  Unless this is interesting — now — then what are we doing?”

For more information on Our Town or the theatre program at the University of South Carolina, contact Kevin Bush by phone at (803) 777-9353 or via email at bushk@mailbox.sc.edu.