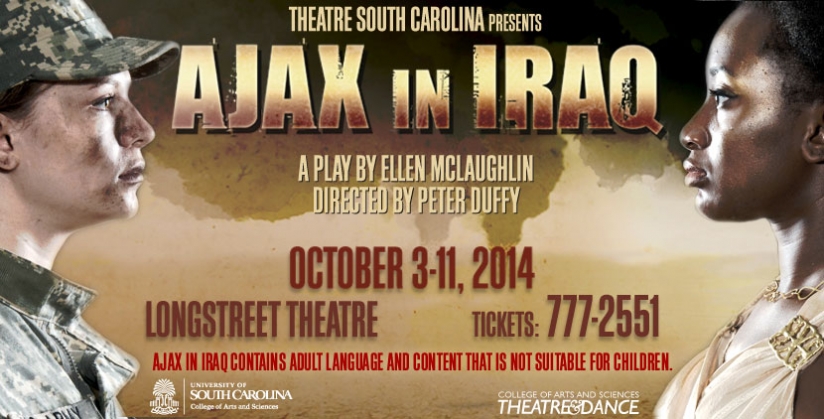 It’s hard not to applaud Theatre South Carolina for picking Ajax in Iraq to open its 2014-2015 season. Playwright Ellen McLaughlin forges a conceptually complex narrative that intertwines Sophocles’ original Greek tragedy, a play often used as a discussion tool for military veterans and civilians both to explore the deleterious effects of wartime on an individual’s psyche, with the modern-day tale of a female soldier in Iraq who, after demonstrating a heroism similar to that of the storied tragedian’s protagonist, is raped by a superior officer and suffers from PTSD.   In the process, McLaughlin takes on the politics of our invasion and occupation of Iraq, the geopolitics of the region, the philosophical and psychological issues at the heart of all war, America’s treatment of its combat veterans, and the problem of sexual abuse in the military — all extraordinarily relevant issues for a generation of college students who have essentially spent their entire lives with our nation at war. That’s a lot of meat for this almost exclusively undergraduate cast to bite off.

Fortunately, this talented group were game for a challenge. Both Jamie Boller as AJ, the female protagonist, and Jasmine James as the goddess Athena, who narrates both storylines, shows poise and depth in their performances, with the former giving a nuanced treatment of the dramatic emotional swells her role was tasked with, and the latter providing a dynamic treatment to the lengthy monologues that are often weighed down with the heavy expositional load that the character carries. Reginald Leroy Kelly, Jr. was also a standout, with an impressive physical presence that brought Ajax’s bloodthirsty hysteria to life. The undergraduate ensemble cast as a whole dove into the play with verve, and captured the unsettling but time-honored truth that all wars are fought by children.

It’s also worth noting that the scenic design by Andy Mills was quite astute, with a gorgeously craggy set of stones with the fractured geography of Iraq outlined in chalk, and a small covered pit lowered in the center that provided an important literal and symbolic space for Ajax’s descent into madness. Director Peter Duffy’s blocking and Terrance Henderson’s choreography also made expert use of the theater-in-the-round framework, and the entire production team brought an impressive level of thought and poise to the table. 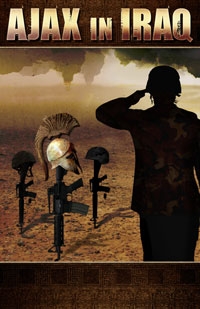 However, the play itself often felt too limited by its wide grasp. The vast majority of the story was told, rather than shown, to the audience, both by Athena as narrator and the Greek chorus of American soldiers. While on a microlevel McLaughlin’s words had power, the net effect felt too much like a rambling, lengthy, unfocused sermon. Relatively little time was actually spent on the most emotionally and thematically fraught element of the play, the details of AJ’s psychological trauma. Instead, lengthy digressions were taken to incorporate a Victorian spin on the history of the Middle East in the 20th century and what amounted to a PSA about homeless vets. And, while the Ajax story obviously recognizes the long history of soldiers psychologically traumatized by war, I feel as if McLaughlin did a disservice to AJ’s story by pairing it so unproblematically with the Greek tragedy. After all, being raped by a superior officer is categorically and qualitatively different than failing to be properly recognized for one’s efforts, and apart from actually staging the rape, the play had relatively little to say on the subject, a pity given the enormity of the problem – women who served in the war were more likely to be raped by a fellow soldier than die in combat.

That said, the play is littered with powerful moments, among them the deft explication of how soldiers mostly end up fighting for love of one another more than any national, ideological, or moral reason, and a powerfully staged rape scene that placed the actors across the stage from one another and captured a cold, alienating sense of aloneness surrounding that act of violence that’s difficult to connote with a literal depiction. (The play also wisely closed on the lit images of soldier’s graves with the actors taking discrete bows from the edges—a sobering way to keep the focus on the issues rather than the theatrics of the performance.)

There’s no doubt that the subject matter and staging of such traumatic stories are worthwhile, and many will likely leave these performances with a heightened sense of our nation’s collective failure to grapple with the immense psychological damage our decade at arms has caused a generation of American soldiers. But I also can’t help but see the play as a bit too heavy-handed in its polemics and remiss in its elision of the extraordinary gender inequities in today’s military. These detractions limit the ability of the play to contribute to an important, underserved conversation around these issues. Despite McLaughlin’s considerable gifts, Ajax in Iraq will always feel like a bit of a failure because of that alone.

Show times for Ajax in Iraq are 8pm Wednesdays through Saturdays, with additional 3pm matinees on Sunday, October 5 and Saturday, October 11.  Tickets for the production are $12 for students, $16 for USC faculty/staff, military personnel and seniors 60+, and $18 for the general public.  Tickets can be purchased by calling 803-777-2551 or by visiting the Longstreet Theatre box office, which is open Monday-Friday, 12:30pm-5:30pm, beginning Friday, September 26th.  Longstreet Theatre is located at 1300 Greene St.