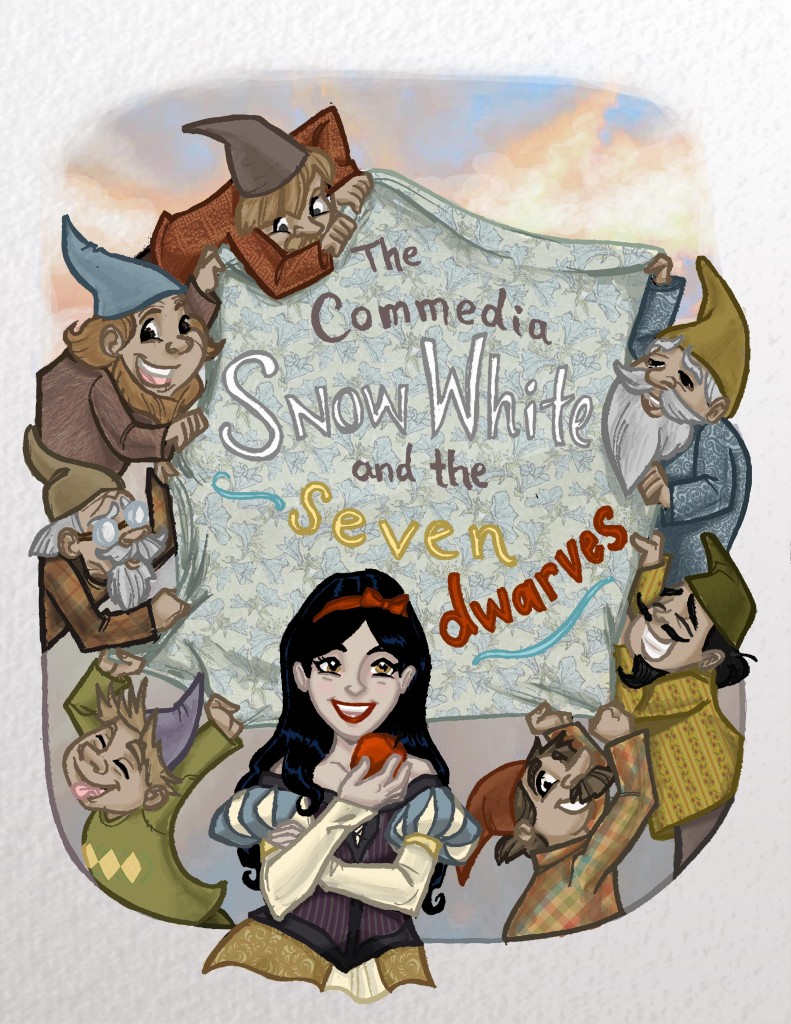 We’re smack in the middle of that sweltering heat for which Columbia is famous, so thank goodness for the cool, original commedia play at Columbia Children’s Theatre. A rollicking band of players bring to life the meaning of commedia dell’arte, or “the very creative comedy of actors,” as described by the gifted (and hilarious) director and writer Jerry Stevenson. The collaborative nature of this Italian theatre tradition soars through the vibrant efforts of an exceptionally talented cast. Melding popular culture, current news items, Broadway musicals, and classic fairy tales with high energy slapstick, the ensemble sparkles in this gem of a production.

The actors capitalize on the fun interplay of the commedia characters’ tension and discord through the fairy tale framework. Lindley realizes his character’s desire to star in a musical with brilliant commitment and impressive vocals; musical theatre fans will be particularly enthralled by his Broadway mash-up. DeHart’s gift for physical comedy fuels zany sequences like an uproarious running gag with sound cues. Her wicked queen is a hoot, especially in scenes with the magical mirror (the delightful Harvey) who belts out hit singles with attitude. Harvey’s considerable talents are put to good use throughout the engaging production. In a charming performance, Deleon creates effective rapport with the audience as Pantalone the narrator. Stepp achieves both the ridiculous (in a good way) and the sublime in her hilariously enchanting portrayal of the title role. One of the veterans from past commedia productions, Stepp is a marvel onstage; you don’t want to miss her magnificent “All By Myself” breakdown among other triumphs.

Some of the wit (Voltaire, anyone?) will be over the heads of younger children, but there are plenty of jokes that land for the kids while the grownups giggle over references to Instagram, Photoshop, Divergent, and Twitter. My six-year-old loved the wordplay of homonym humor such as “hair/hare” and “pi/pie.” This is definitely a show that works on multiple levels. When Snow White can’t eat gluten or high fructose corn syrup, hilarity ensues. The ingenious staging of the seven dwarves is simply too good to describe – go see the show and be ready to laugh yourself silly.

These actors are quick-witted, clever, and multi-talented (singing, dancing, the ability to turn awesome cartwheels in a big puffy princess gown…) They are also experts at connecting with the child audience members who seek autographs after the show. I continue to be impressed by how the CCT performers relate to individual kids. It is no small feat to deliver a raucous performance and immediately thereafter exude kindness and intuitive understanding of young people.

The only thing I’d like more than attending a performance of The Commedia Snow White and the Seven Dwarves? Watching what must have surely been a laugh riot of a rehearsal and development process. CCT has produced commedia offerings for five consecutive summers; let’s hope for more delicious fun in future from the Spaghetti and Meatball Players.

Call 691-4548 to reserve seats for your campers at a discounted group rate.