A high school junior. A film producer. A graduate student. A physician assistant. An elementary school administrator. A ten-year-old. These are just a few of the talented cast members lighting up the stage in the vibrant and polished production A New York Minute: An Original Musical Revue at the Village Square Theatre in downtown Lexington. The show provides an enjoyable education in musical theatre history, spanning from the early days of vaudeville up through hits like The Producers, Hairspray, and The Book of Mormon. While familiarity with the full musicals will help audience members connect with some of the humor, anyone can enjoy this show, regardless of musical theatre background. Produced by Fred Holbrook, Janice Holbrook, and Courtney Long, A New York Minute involves over fifty dedicated theatre artists in the cast and crew.

Directors Leslie Dellinger and Vicky Jackson demonstrate the admirable ability to compress a vast amount of Broadway musical theatre history into an entertaining performance. Their combined expertise and knowledge propel wise song choices and clever arrangements. Fluid transitions and skillful staging choices are noteworthy, especially with a large cast in tight quarters. The clever Sondheim versus Webber scene directed by Jolie Frazer-Madge offers a delightful frame for exploring the works of two renowned composers. In a cast of this size and variety, skill levels differ, yet the directors emphasize the ensemble’s diverse strengths.

One of the great challenges in a musical revue involves capturing character depth and particular styles of different shows within just a brief glimpse, and this production succeeds. Rachel Rizzuti reveals magnetic stage presence and a supple voice as beloved characters including Eliza Doolittle from My Fair Lady and Elphaba from Wicked. Melissa Hanna revs up Thoroughly Modern Millie with gutsy boldness, as Christian McClaran demonstrates remarkable range in contrasting roles –  earnest Seymour from Little Shop of Horrors, and the decadent Emcee in “Wilkommen” (Cabaret.) Tim Privette delivers El Gallo’s wistful wisdom in “Try to Remember” (The Fantasticks) and T.J. Daley becomes a marvelous Nicely Nicely in “Sit Down You’re Rockin’ the Boat” (Guys and Dolls), while a “women in musicals” sequence brings characters to life from shows like Funny Girl (Courtney Long), Wildcat (Mellie Boozer), and Sweet Charity (Ingram Trexler). Young performers share sweetness and sincerity in well-known numbers including “Where is Love?” (Paul Woodard) and “Castle on a Cloud” (Caroline Quinn). Although the narrative interludes are somewhat uneven and less confident than the musical numbers, actors such as Harrison Ayer, Rae Fuller, and SuzAnne Smithson are particularly successful by engaging viewers as if their monologues are conversations with the audience.

Musical director Camille Jones leads the way for a cast with inspiring singing voices. Group numbers highlight beautiful vocal blend and musicality, as in the melodious “Carolina in the Morning,” and a sprightly Rodgers and Hammerstein sequence. Particular standouts include Jody Jackson’s hauntingly genuine “I’m Still Hurting” (The Last Five Years), Zack Hill’s mesmerizing Pippin solo, a poignant Cole Porter duet by Brian Andrews and Olivia Johnson, and a truly lovely “Tonight” quintet from West Side Story with the extraordinary Katie Gatch and Stephen Fisher, both of whom dazzle in several featured roles (Urinetown, Spamalot). Even short bits of songs can become gems, as in the exquisite “Someone to Watch Over Me” (Gatch and Jody Jackson). Many other individual and group performances are equally notable in this talent-packed triumph.

Strong choreography by Hanna and Vicky Jackson provides solid visual appeal, including demanding dances such as the Fosse number “Steam Heat” (Hanna, McClaran, Emma Rocheleau) as well as effective musical staging for large group medleys. A rock opera montage (choreographed by Kendall Hutcheson) and a Disney montage feature impressive work by highly skilled dancers, although I must admit feeling a bit deflated at recorded vocals in these sequences; with such capable performers, I would have loved to hear the music sung live. However, that is a minor quibble in the light of well-crafted dance sequences. From crisp tap numbers in the Cole Porter and Gershwin medleys to a spirited romp of “Run Freedom Run,” the choreography sparkles. 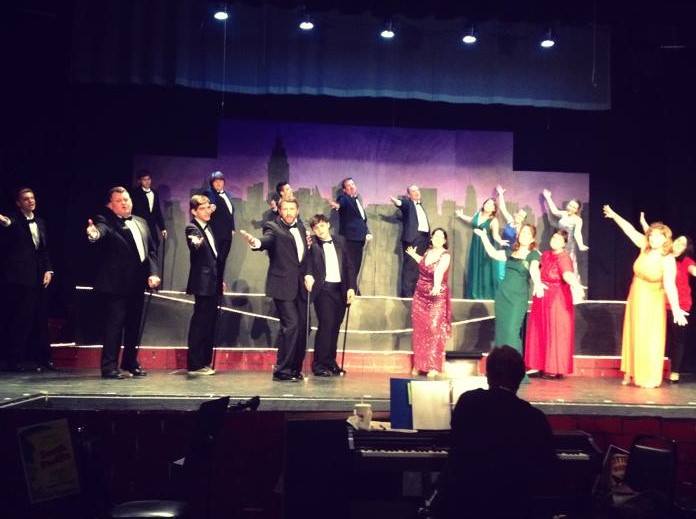 Simple, classy set design choices by Daniel Woodard and Debra E. Leopard’s lighting design offer attractive support for the production. Sound engineer Becky Croft achieves a clean balance for the singers. Costume design by Barbara Bise, Nancy Huffines, and Heidi Willard is quite an accomplishment: there are a lot of people to clothe, and the costumes evoke movement through time with familiar styles and recognizable lines. Stage managers Kayla Checkovich and Aryel Toup make it all happen backstage – a big job done well.

My six-year-old daughter enjoyed a more thorough musical theatre history education in two and a half hours than I could give her in months, perhaps even years. (This child was so impressed by A New York Minute that she has been studying the program with devoted interest ever since we attended the Sunday matinee.) As for me, I savored the opportunity to imagine casting dozens of musicals with the talented ensemble. Musical theatre lovers will be delighted by A New York Minute, and I’ll wager that plenty of folks who might walk in thinking they aren’t crazy about musicals will leave this show singing a different and appreciative tune. A New York Minute: An Original Musical Revue runs through Sunday, May 18 at the Village Square Theatre; call 803-359-1436 for ticket information, or visit www.villagesquaretheatre.com.

One Response to “A New York Minute: An Original Musical Revue” – a review (of the revue) by Melissa Swick Ellington