Columbia is undeniably a theatre town, and it’s no longer limited to the downtown area.  Every few years, theatre enthusiasts in the Midlands see a need and an opportunity, and another group is born. Lexington, Chapin, West Columbia and Forest Acres are all home to thriving performance groups, and now Blythewood joins the mix.  Choreographer Christy Shealy Mills took a moment to talk with Jasper about the upcoming production of Hello Dolly, the debut presentation of the Blythewood Community Theatre.

Jasper:  How did this group get its start?

Mills:  The folks in Blythewood have wanted to get their own theatre group going for years, and finally found someone willing to take a stab at directing, Rachel Tefft.   Out of the forty something cast members, about 1/3 of them have taken part in previous Midlands area productions. The rest are all newcomers. This new local theatre group will draw in people who might not otherwise get involved in such offerings.

Jasper:  You’re actually commuting to choreograph this show, right?  How did you become involved?

Mills:  I live in Prosperity in the corner of Saluda County and have three dance studios, in  Lexington, Batesburg, and the one in my backyard, as well as satellite classes at Town Theatre in Columbia.  I am not sure how I became involved with Blythewood, other than the director , Rachel Tefft , whom I had never met, called me back in November and asked me , and said I was highly recommended.  I don’t know where that came from, but the flattery worked.  She wasn’t even sure which of three shows they were going to do, but I knew something about Hello, Dolly and was familiar with most of the music, and hoped it would be this one. I didn’t know at the time just how much choreography that would be – it’s a good thing I like challenges.

Jasper:  Have you always been a dancer and teacher?

Mills:   I have been dancing since I started classes at the age of three. My first ever performance,  I did the entire routine with my back to the audience. I don’t remember ever NOT wanting to do this as a career. As a matter of fact, I do remember as a high school freshman taking a career aptitude test, and complaining to my parents at dinner that night that there was no career choice of dance instructor mentioned. My dad, looking quite horrified, said “a DANCE TEACHER? Why would you want to be a dance teacher? Dance teachers are kind of…tacky.”  That cemented my career choice, and I have been trying to live up to that opinion ever since.

Jasper:  Which groups have you been involved with locally?

Mills:  I first become involved in community theatre with George Boozer’s fabulous Lexington Arts Association revues starting about 1972 or ’73.  That was REALLY community theatre. This Blythewood group  reminds me of those fun productions – all these rookies not having a clue what they are getting into, and just how much that theatre bug is biting them with each and every passing day. It was the same way in Lexington. Those huge musical revues caused me to make friends and memories that will last a lifetime.  Plus, I learned about theatre, and increased my dance, music and even history knowledge. Once I had the first of my four children, I stopped doing theatre until 2010, when I was blessed to be a part of Town Theatre’s Annie.

I did choreograph some full length musicals for Lexington High School during the baby years, and have done lots of pageant choreography. And, of course, I have been teaching dance since I was 14.  I choreographed Gilligan’s Island – the Musical and portions of Nunsense Jamboree for On Stage Productions, but the first full length show I choreographed was Dirty Rotten Scoundrels at Town Theatre. It was quite an undertaking, but Scott Blanks was such fun to work with – a creative genius. Now that I think about, all the the directors I have worked with have that genius touch. I guess that is why they are directors, huh?

Jasper:   Hello Dolly certainly has a rich history, based on Thornton Wilder’s hit comedy The Matchmaker, based in turn on an older Austrian work, based on an older English story, but this is the most famous version, and the one with all the familiar songs.  Why this particular musical?

Mills:    The reason this was the choice (of the three possible shows  that were being considered) was the casting – after the great turn-out at auditions, Rachel could see that she had the right leads for Hello, Dolly, so that did it. It is huge undertaking.  I was a little worried, because there is no canned music, so working with live musicians introduces a whole new element to the works. I love live music, and it never ceases to amaze me how musicians who have never played together before can come in a week before the show opens and make it happen.  We have been sort of feeling our way as we go with this first show.

Jasper:  Hello, Dolly was a huge success when it first debuted, winning a record-setting 10 Tony Awards (including best musical, best score and best book) and running for over 28oo performances, another record at the time; its movie version won three three of the seven Oscars for which it was nominated.   There have been a number of successful revivals on Broadway since then – why do you think the play still resonates with contemporary audiences?

Mills:   It’s just a fun, colorful, lively trip into yesteryear – a delight for the ears and eyes.  The music its timeless.  “It Only Takes a Moment” – a song about love at first sight – is lovely and rings true no matter the era. The tunes will have the audience tapping their toes and humming on the way home. I know these songs have been in my head for months.

Jasper:  Tell us about your cast, and where we might have seen them before.

Jasper:  What are some challenges you have faced as choreographer?

Mills:   I had never actually seen Hello, Dolly, so when people kept referring to the “waiter’s dance,” I thought they were talking about the big “Hello, Dolly” song.  I am a one-day-at-a-time kind of person, and was just working on the routines when the director told me to.   So when I finally noticed in the score the music for “Waiter’s Gallop” – the one with no lyrics – I thought that was just an interlude piece for the band.  I can’t quite remember how I came to realize that it was actually an eight minute dance routine for only the waiters!  I probably went into shock and have blocked that moment from my memory. But my spirited twelve dancing waiters have been motivational for me. In hindsight, I should have started that routine first instead of last, but it has come together and hopefully will entertain the audience. I don’t want to give away all our secrets, but let’s just say there’s tap dancing , baton twirling, juggling, some upside down antics, perhaps some unicycling ( still trying to get the unicycle functional) and some hoochie-coo.  I thought the other challenge would be getting the entire cast to waltz, but they are such troupers, it was a piece of cake. All fun stuff, and I am going to miss this group come April 6 (the last performance.) 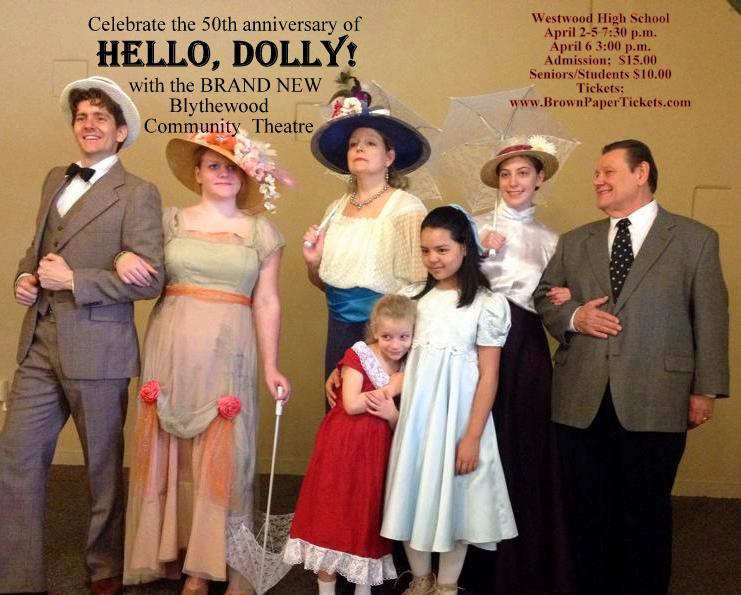 Blythewood Community Theatre’s production of Hello, Dolly runs Wed. April 2 through Sunday April 6 at Westwood  High School.  Tickets can be purchased online at www.brownpapertickets.com or at the door.