“Like so many other things worth writing about, I first heard about the Mobros in a bar.

After consuming many beers, an older gentleman started telling me about this two-piece blues band he had seen the previous weekend. Because Americans receive two-piece blues bands with the regularity of a utility bill, I listened to him rave about his latest discovery with a mild air of cynicism that I have since come to regret. He told me that they were too young to be as good as they were, and that they were one of the tightest local acts he’d ever seen. As it turned out, he was pretty much dead-on.

In the years since they’ve appeared, the Mobros have become one of the most talked about bands not just in the state, but in the entire Southeast. Columbia music veterans speak of them with the sort of pride and amazement usually reserved for parents whose teenager has been allowed to skip the tenth grade. It’s for this reason that the Mobros’ first proper release, Walking with a Different Stride, has been so hotly anticipated.

And the album is good–there’s no doubt about it. All of the brothers’ strengths are on full display. Kelly Morris has a rich, soulful voice that would be unusual even for an older and world-wearier man, while drummer Patrick Morris deftly melds creativity with discipline and plays in perfect syncopation with his brother’s galloping guitar lines. For added flavor, breezy harmonies are spread throughout the album with effective economy. As recorded proof of the duo’s talent as musicians and songwriters, Different Stride is a success; but it lacks a certain energy that has always been integral to the band’s appeal.

The Mobros aren’t exactly at fault. This is the sort of problem you run into when a live band this good tries to translate its stage energy into another form altogether. Some bands do it with ease while for others it can be like gluing a lightning bolt to the sky. But the problem really has less to do with the artist and more to do with the way people consume the music in their own community. A big-time national touring band may only come around once or twice a year, so the record is really the best you can do while you wait to see them again. When an act as undeniably talented as The Mobros is something local, and it’s not that difficult to see in person, an album will always feel second best. But really, it’s not unthinkable that the Mobros could become a national touring band someday soon, and when that happens, Walking with a Different Stride might benefit from reappraisal.” – Michael Spawn

For more record reviews, click through the image below: 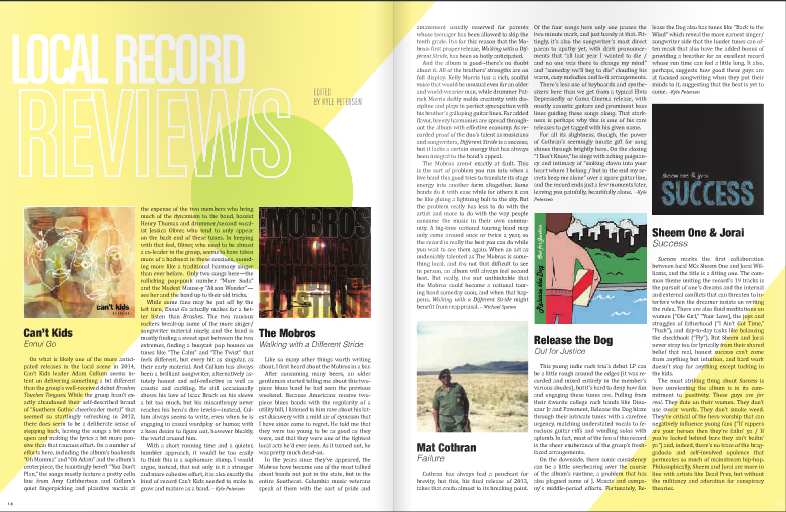 What Jasper Said is the blogging arm of Jasper – The Word on Columbia Arts, a new written-word oriented arts magazine that serves artists and arts lovers in the Columbia, SC area and its environs in four ways: Via Print Media – Jasper is a bi-monthly magazine, releasing in print six times per year in September, November, January, March, May & July, on the 15th of each month. Jasper covers the latest in theatre and dance, visual arts, literary arts, music, and film as well as arts events and happenings; Via Website – Jasper is an interactive website complete with a visual arts gallery, messages from Jasper, an arts events calendar that is updated several times daily, bite-sized stories on arts events, guest editorials, local music, dance & theatre videos, community surveys, and more; Via Blog – What Jasper Said -- you're reading this now -- is a daily blog featuring a rotating schedule of bloggers from the Jasper staff as well as guest bloggers from throughout the arts community; Via Twitter – Jasper Advises is a method of updating the arts community on arts events, as they happen, with more than a half dozen active tweeters who live, work, and play inside the arts community everyday ~ Jasper Advises keeps the arts community abreast of what not to miss, what is happening when it is happening, and where to be to experience it first hand.
View all posts by Jasper →
This entry was posted in General and tagged blues, columbia, duo, kelly morris, music scene, patrick morris, rock, SC, south carolina, the mobros, walk with a different stride, young. Bookmark the permalink.