What a delight it was last Saturday at Saluda Shoals Park to catch the SC Shakespeare Company perform a reading of The Most Excellent and Tragical Historie of Arthur, King of Britain, a play within a novel by New York author Arthur Phillips. 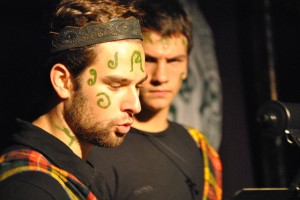 To hear the robust delivery of Shakespeare’s lines amid the occasional hoot of an owl or hum of crickets is a rare pleasure, providing an example of the outdoor theater experience that can become a regular source of enjoyment for Midlands audiences if fund-raising for a proper outdoor venue is successful.

Before the performance, Phillips gave a talk about his novel, The Tragedy of Arthur, copies of which were available for purchase, with proceeds going to the park’s planned “Nature’s Theater,” a grand outdoor performance venue, the plans for which include a covered stage, seating for 500 with a lawn to accommodate 500 more, and a rooftop event space. I get really excited at the thought of seeing the SC Shakespeare Company and other esteemed performers regularly on a glorious outdoor stage cradled in nature’s womb.

Until that happens, however, you can see the SC Shakespeare Company open its 2011-12 season with one of the Bard’s earliest and funniest plays, The Comedy of Errors, this weekend at Saluda Shoals Park. Directed by Scott Blanks, the production will put a decidedly modern, World War II twist on the play, which gets so many of its laughs from hilarious episodes of mistaken identity and slapstick. Performances run nightly through Saturday, October 1, at 7:30 p.m. at Saluda Shoals Park, in conjunction with unearth: a celebration of naturally inspired art (culminating on Sunday, October 2,  from 1-5  p.m. with performances, poetry readings and art being created outdoors at the park).

Tickets for Comedy of Errors are $10 for adults and $5 for children 12 and under. If you can’t make those performances, the Company also will perform The Comedy of Errors at Finlay Park from Wednesday through Saturday, October 12-15, at 8 p.m. nightly. For more information, call 803-787-2273.