There may be snow and ice across most of the southeast, but there is warmth to spare in the little town of Second Samuel, GA (so named after the Yankees burned the first town down) where colorful Southern eccentricity blends with a timely message of tolerance and acceptance. Pamela Parker’s Second Samuel has been produced at dozens of theatres, from Wetumpka, AL, to Perth, Australia, and off-Broadway by this production’s director, Robert Harrelson. Harrelson, the founder of On Stage Productions in West Columbia, has a nice little under-the-radar hit on his hands, and it only runs through this Sunday at the On Stage Performance Center, at 680 Cherokee Rd. 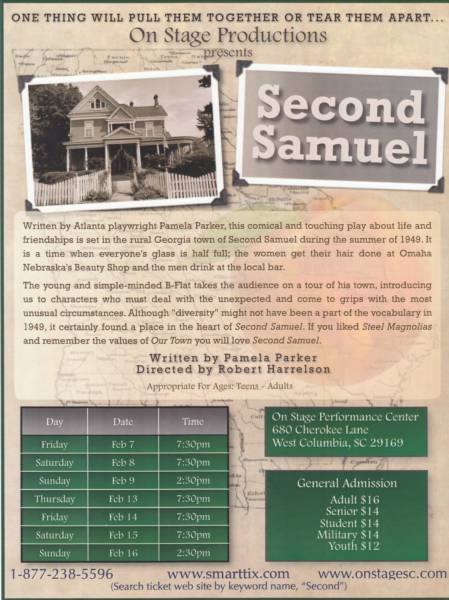 Our narrator and tour guide is B-Flat (Sam Edelson), an appealing, innocent young man (or older teen) given his ironic nickname by piano teacher Miss Gertrude for his lack of musical ability. (His actual surname is “Flatt,” first initial “B.”) B-Flat is just a little slow, or what they used to call “simple” in the play’s 1949 setting. Think Jethro from The Beverly Hillbillies, or Eb from Green Acres, just more loveable. As played by Edelson, one imagines that B-Flat is probably just awkward and perhaps dyslexic, with minimal education. His description of his hometown’s quirks is fairly eloquent and insightful, in the manner of Big River‘s Huck (another under-educated outcast thought to be simple), and one local accurately observes that the boy may have more sense than anyone else. Plus his big heart makes up for any intellectual shortcomings. Like Steel Magnolias, the local ladies gather to chat at the beauty parlor, while the men convene at “Frisky’s Bait and Brew,” the kind of place where you can get a Nehi and a Moon Pie as easily as a cold beer or a shot of whiskey. Every character would be at home in Mayberry, Hooterville, or Faulkner’s Yoknapatawpha County. I mention these iconic rural settings from fiction not to imply that author Parker is necessarily influenced by them, but rather to note that she is working in an easily recognizable tradition, with all the stock character types – archetypes even – that we expect. What she does with them, however, is quite creative, and caught me completely by surprise.

1949 was the summer that the beloved Miss Gertrude died, and the play’s action commences with preparations for her funeral, as everyone recalls how she touched so many lives in some way. Assorted plot twists transpire, taking the broad, southern-fried comedy of the first act into slightly more serious and meaningful territory in the second. Hilarious characters still are funny, but they face decisions that will define just who they are, both as individuals and as a community. A good parallel might be socially conscious sitcoms from the 70’s like All in the Family, or warm family-themed shows from the 80’s (e.g. Family Ties or The Golden Girls) where outrageous characters engage in outlandish antics, but there’s still an “Awwwww” moment at the end.

A friend noted that everyone seemed perfect for his or her role. A few of the cast are clearly newer to acting, while some have been shining in lead roles for decades, especially at community theatres in Lexington and Chapin, but everyone plays a specific type convincingly. Parker’s dialogue flows very naturally, and all the cast has to do is go where the words take them. Debra Leopard and MJ Maurer are especially convincing as histrionic ladies with big hair, while Courtney Long as pretty young Ruby has fewer lines, but is always enaged in the action on stage. As Leopard and Maurer squabble with the town troublemaker (Anne Snider) Long is giggling silently at every word, indicating how seriously the audience should take them. David Reed as the local funeral director has some inspired comic moments. Full disclosure: he and I did a show together 20+ years ago, and so I am familiar with his real voice and mannerisms. Here he affects the soft, high voice of a prim Southern gentleman, and creates a very believable character. Some of the show’s biggest laughs come from physical comedy where Reed is drinking, while the beauty parlor ladies are screaming: everyone’s pace and pitch is perfect, while Brandon Moore‘s split-second timing on light cues makes everything flow at a lively pace. Also deserving of praise is the sincerity that A.T. Marion brings to the pivotal role of “U.S.” In rural 1949 Georgia, the challenges faced by U.S. as a person of color are obvious, and Parker never sugar-coats the historical context. U.S. wisely explains to B-Flat that each of them is different, but then, who isn’t in some way? The charm of the town, and the play, is the way in which the town’s residents ultimately look out for their friends. (They even pretend to believe the man who swears he was kidnapped by Nazis from a U-boat off Myrtle Beach , when everyone knows this was a story concocted to explain a week-long bender.) 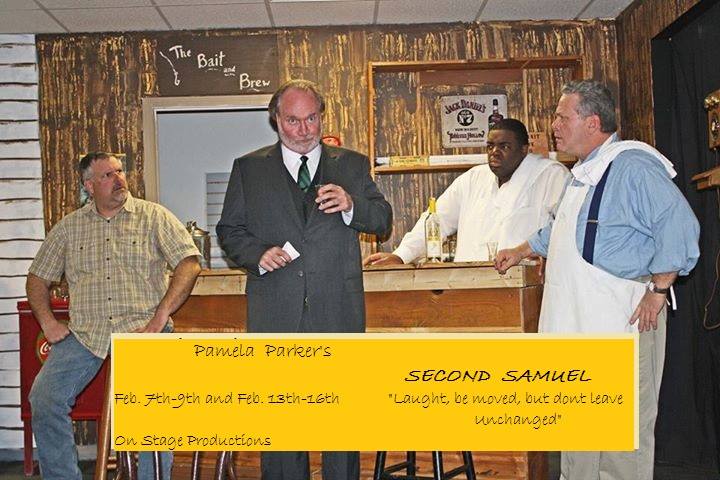 The space at On Stage, a former retail shop that probably specialized in country-western attire, is limited, and director Harrelson does an excellent job of blocking, given the close quarters. More importantly, he has cast the right types to bring out the depth and nuances of the work, which can be enjoyed at face value as a variation on Mayberry or Vicky Lawrence’s Momma’s Family, or taken at a much deeper level.

On Stage Productions is now in its fourth season (see the current print issue of Jasper – vol. 3 no. 3 – for some details on its origin) and is a wonderful little gem that’s not nearly as out of the way as you might think. From downtown Columbia, you simply cross the Blossom St. bridge and head out Charleston Highway, veering on to Airport Blvd. Cherokee Lane is the right just before I-26, which it parallels, and you’re there in not much more than 5 minutes. When my friend Melissa saw and reviewed their last production, her young daughter told her “This looks like a fun place to do a show,” and I heartily agree.