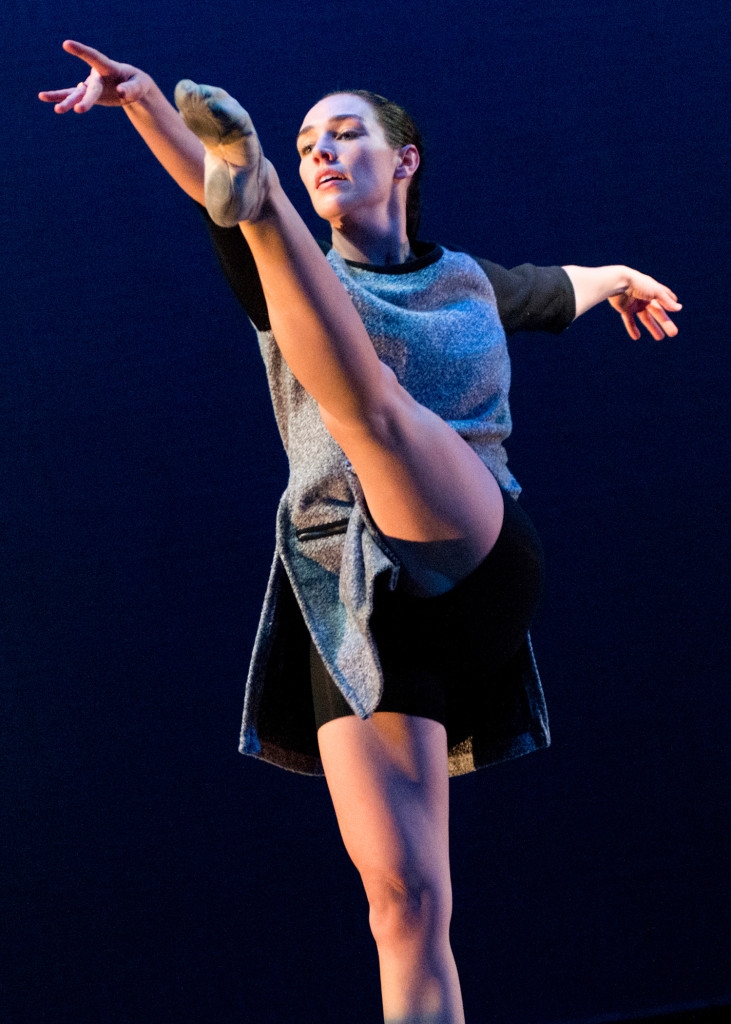 The USC Dance Company will present Breaking the Barrier, a program of contemporary dance works, February 12-15, 2014 at Drayton Hall Theatre.

About the Featured Works

Bushache Étude,  by pioneering African-American choreographer Pearl Primus, recreates a ritual dance of the Bushongo people of the former Belgian Congo, which was used to purge their communities of evil spirits.  Speaking to NPR in 1994, Primus stated that she intended for the dance to “show the dignity, beauty and strength in the cultural heritage of the peoples of African ancestry” living in the US.

“It’s a dance of transforming oneself for the benefit of the community,” says dance instructor Diane McGhee Valle, “where one tries to overcome personal fears and purge the community of evil.”

Valle, the head of USC’s Dance Education track, was instrumental in making Bushache Étude available across the nation through her work with the American Dance Legacy Institute in the late 1990s.  The ALDI worked with Primus before her death in 2010 to include Bushache in their Repertory Études™ initiative, which strives to pass on the legacy of influential American choreographers to contemporary dance artists, teachers and students.

“The basic idea of the dance is tackling fear, and everyone faces fear, whether psychological, physical or cultural,” Valle says.  “We are taking this idea and embodying it as contemporary women.”

Paper Wings by Helen Simoneau
Contemporary choreographer Helen Simoneau has been described as having “a gift for creating shapes with dancers’ bodies” (Winston-Salem Journal), with an “ability to…create pieces that float beautifully between imagery and purpose” (ExploreDance.com).  The award-winning artist has seen both her solo and company works performed throughout North America, Europe and Asia.  She comes to the University through a connection to assistant professors of dance Thaddeus Davis and Tanya Wideman-Davis – all three are recent graduates of the Hollins University/American Dance Festival MFA program.

The USC dancers will perform Simoneau’s Paper Wings, which made its debut at the American Dance Festival in 2012.  Set to a minimalistic score of electronics and percussion, the piece explores movement possibilities by assigning dancers with physical tasks and giving them the opportunity to discover their own unique physical approaches to accomplishing those goals.

“When coaching the dancers, something I talk about a lot is having a real-time experience,” Simoneau explains.  “If the dancers are able to have a really sensorial experience of the movement in real time, then the audience will take in what is actually happening rather than what is being performed.  They will notice that difference.”

Untitled by Tanya Wideman-Davis
Assistant Professor Tanya Wideman-Davis’ still untitled work explores how the configuration of the performance space itself can affect the movement around it.  The piece features a prominent architectural element with a built-in light source, which reflects down and away from the structure.

“The audience will be witnessing how the dancers move around this particular structure and navigate the architecture in space,” she says.  “We’re investigating how space and movement can be shaped so that they are both causing a similar experience.”

Reframing by Stephanie Wilkins
USC Dance instructor Stephanie Wilkins describes her work as a dance about freeing oneself from emotional pain.  For her, a quote from the writer Alexander Dumas sums it up best: “Moral wounds… may be hidden, but they never close; always painful, always ready to bleed when touched, they remain fresh and open in the heart.”

“Basically the first section, which has 4 big frames which will hang from the ceiling, one dancer behind each one, is about hiding behind your pain and not dealing with it, but wanting to break free of it and learn to love again,” she explains.   “And the second section will be about this process of breaking free and feeling everything again.”

Mass Hysteria by Thaddeus Davis
Assistant Professor Davis describes Mass Hysteria as a “pure dance work.”  The acclaimed choreographer, recipient of the prestigious Choo San Goh award, says it is “an educational tool for our students to explore contemporary dance and the process of making new work.”

Putting It All Together

When asked about all the selections being presented for the concert, Wideman-Davis thinks back to how artists like Primus paved the way for contemporary female dance creators.

“Pearl was provocative, a female choreographer at a time when were there not a lot of opportunities for African-American women to create work.  This program, with four original works by female choreographers, is like a platform for women to be able to present creative, in-the-now work with young artists who are themselves in the process of figuring out how they’re going fit in the artistic world.”

For more information on Breaking the Barrier or the dance program at the University of South Carolina, contact Kevin Bush by phone at 803-777-9353 or via email at bushk@mailbox.sc.edu.

What Jasper Said is the blogging arm of Jasper – The Word on Columbia Arts, a new written-word oriented arts magazine that serves artists and arts lovers in the Columbia, SC area and its environs in four ways: Via Print Media – Jasper is a bi-monthly magazine, releasing in print six times per year in September, November, January, March, May & July, on the 15th of each month. Jasper covers the latest in theatre and dance, visual arts, literary arts, music, and film as well as arts events and happenings; Via Website – Jasper is an interactive website complete with a visual arts gallery, messages from Jasper, an arts events calendar that is updated several times daily, bite-sized stories on arts events, guest editorials, local music, dance & theatre videos, community surveys, and more; Via Blog – What Jasper Said -- you're reading this now -- is a daily blog featuring a rotating schedule of bloggers from the Jasper staff as well as guest bloggers from throughout the arts community; Via Twitter – Jasper Advises is a method of updating the arts community on arts events, as they happen, with more than a half dozen active tweeters who live, work, and play inside the arts community everyday ~ Jasper Advises keeps the arts community abreast of what not to miss, what is happening when it is happening, and where to be to experience it first hand.
View all posts by Jasper →
This entry was posted in General and tagged Helen Simoneau, Kevin Bush, Pearl Primus, Tanya Wdiemadn-Davis, Thaddeus Davis, USC Dance, Wtephanie Wilkins. Bookmark the permalink.