Planet Hopping Is Out of This World

The actor questions, “Is everybody ready to go back to earth?”

“No!” declares a young boy in the audience.

He was certainly not the only one who wanted to prolong tonight’s premiere performance of Planet Hopping: An Intergalactic Puppet Musical. This luminous collaboration between the puppet artists of Belle et Bête and popular “kindie” rock band Lunch Money reveals the theatrical magic possible when innovators imagine together. The performance quality easily rivals family-oriented productions I have attended at national theatre education conferences as well as various venues in New York City. Planet Hopping is a marvel that has been created right here in Columbia, and you don’t want to miss it.

Developed as part of the Harbison Theatre @ MTC Performance Incubator, Planet Hopping shares a voyage from earth to outer space with an emphasis on the power of friendship. Kimi Maeda brings engaging charisma to the play’s puppet hero (Stella Spark, “an astrophysicist when she was just a lass”), while Lyon Hill skillfully characterizes Stella’s sidekick marionette, the lovable and quirky robotic assistant Jack. Through Stella’s Planet Hopping technology, the audience accompanies the characters on a dramatic journey through the solar system, led by the appealing tour guide Mollinda (Molly Ledford). The incorporation of fantasy with scientific facts will delight both children and their adults.

The Lunch Money band members (Ledford, J.P. Stephens, and Jay Barry) are as captivating as ever, sharing clever lyrics and rocking tunes that resonate with music lovers of all ages. One of the production’s greatest strengths is the seamless inclusion of the multi-talented band members as purposeful characters in the story. The “Amazing on the Moon” musical number melds band, projection screen, puppeteer, and marionette in a charming sequence made extra special by a puppet moonwalking…on the moon. The crowd-pleasing “Big Ball of Gas” Jupiter rap performed by P.J. the “new guy” (Stephens) with beatboxing by Jack the robot (Hill) becomes a highlight of the show.

Planet Hopping benefits from an admirable unity of production design, with creative use of lighting effects, video projections, and shadow puppetry. Want to learn about zoetropes, moveable cutouts, marionettes, transparencies, scrims, and more? Check out a fascinating behind-the-scenes look at the production here: http://www.harbisontheatre.org/behind-the-scenes-with-planet-hopping/. You can also read composer/lyricist Molly Ledford’s insights into the development of the show’s music, which includes “a bubblegum pop song about orbiting” and “a rockin’ number about enjoying 1/6 of our normal gravity on the moon.”

What a gift this collaboration is to our community. My six-year-old daughter spotted a promotional poster weeks ago and has been pleading to “go see the show Planet Hopping” ever since; I am grateful for her awareness and persistence, because this production is a one-of-a-kind experience. Upon receiving a sticker badge when exiting the theatre, my kid sighed happily, “It is amazing to be an official Planet Hopper.”

You can go hop planets with Captain Stella Spark and crew on Saturday, November 16 at 2 pm at the Harbison Theatre at Midlands Technical College (803-407-5011 or www.harbisontheatre.org). 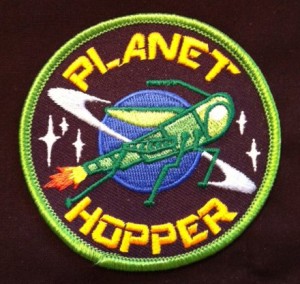