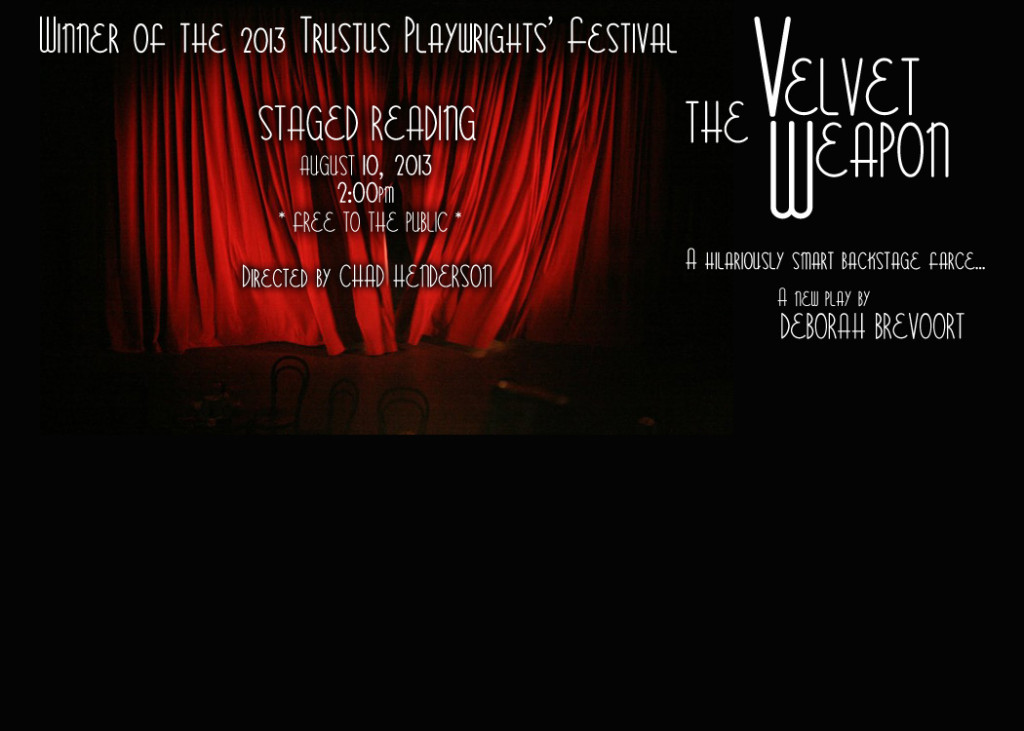 Love live theatre, but stymied by steep ticket prices?  Trustus has got you covered.

Love live theatre, but have commitments like jobs and children that keep you from going out at night?  Trustus has got you covered.

Ever wish you could give feedback directly to a playwright, before the play ever even opens?  Trustus has got you covered.

Are you so tired of the famously hot August heat – punctuated by the monsoon-like August thunderstorms – that you wish you could just sit down in the dark somewhere with a cold beer or refreshing glass of wine, and watch some live theatre you’ve never seen before? Trustus has got you covered.

Tomorrow afternoon at 2:00 PM – that’s Saturday, August 10th – The Velvet Weapon, winner of the 2013 Trustus Playwrights’ Festival, will have a one-time-only staged reading at Trustus Theatre, open and free to the public.  The Trustus bar will also be open (although not free.)  There are only some 135 seats, however, so make sure one of them is yours.

The playwright, Deborah Brevoort, was kind enough to talk with Jasper about her new work, and you can read that exclusive interview here.  The cast for this reading includes:  Paul Kaufmann (last fall’s Next to Normal and  I Am My Own Wife, both at Trustus), Trey Hobbs (Albany in USC’s recent King Lear, Greg in reasons to be pretty at Trustus in 2010), Mandy Applegate (The Last Five Years and Plan 9 from Outer Space, both at  Trustus, and The Producers at Workshop) Hunter Boyle (Peron in Evita at Trustus, Big Daddy in Cat on a Hot Tin Roof at Workshop) Chelsea Nicole Crook, Eric Bultman, Cindy Durrett (numerous incarnations of Nunsense at Act One Theatre), Josiah Laubenstein (Edgar in King Lear, and Mike in Pine, the previous year’s Festival winner  currently running at Trustus), Raia Jane Hirsch (The Motherf*@%er With the Hat at Trustus, Pride and Prejudice with SC Shakespeare Co.), and Kayla Cahill (The Shape of Things at  Workshop.)

Press material describes The Velvet Weapon as “a hilariously smart backstage farce that will leave you laughing while also engaging you long after you’ve left the theatre.  At the National Theatre of an unnamed country, in an unnamed city, a matinee audience rises up in protest over what is being performed on stage, and demands something new. They begin a performance of their own of The Velvet Weapon, a play by an unproduced playwright of questionable talent. Inspired by the Velvet Revolution in the former Czechoslovakia, The Velvet Weapon is a humorous exploration of populist democracy told through a battle between high-brow and low-brow art.”

Jasper:   What has your involvement been in previous years with the Playwrights’ Festival?

Henderson:  I directed Swing ’39 in 2011. I also acted in Copy Man under the direction of Jim Thigpen years ago.

Jasper:  Why is it important for an author to get feedback via a reading?

Henderson:  Probably the same reason I invite colleagues to come watch rehearsals of a show I’m directing before we open – its good to know what’s working and what’s not. In this particular case, Brevoort has written a farce – so pace and delivery is the name of the game it seems. The language on the page is the direct key to engaging an audience, so

Jasper:  How did you go about casting Velvet Weapon?

Henderson:  I was looking for people who are quick, humorous, and who have good timing.

Jasper:  For audience members who have never attended a reading before, what can they expect?

Henderson:  The actors (and it’s a great cast) will be reading without staging. Therefore, they will be acting while reading – but not walking around the stage. We would have loved to have staged this reading, however with farces there’s so much action that simplistic blocking would get in the way of the words being said. And since this is a celebration of a new work – we’re keeping it simple. But the script is certainly funny enough and endearing enough to entertain on a Saturday afternoon.

Jasper:  What sort of themes are addressed in this play?

Be the first to see The Velvet Weapon, which will get a full production in the summer of 2014.  Curtain is at 2 PM tomorrow (Sat. Aug. 10) at Trustus Theatre, at 520 Lady Street in the heart of the Congaree Vista.  The Facebook “event” page for the reading is here.