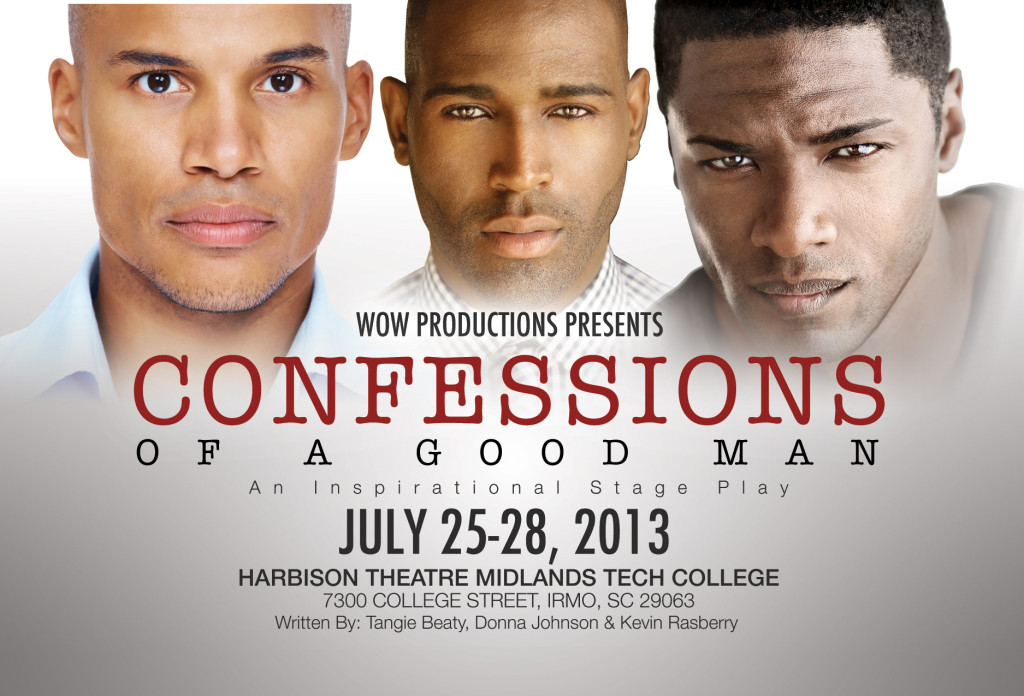 Walking on Water (WOW) Productions playwrights Tangie Beaty and Donna Johnson have teamed up with author Kevin A. Rasberry to present their brand new production, Confessions of a Good Man.  The show is a prelude of sorts to Rasberry’s book, Evolution of a Good Man, which will be released in 2013 as well. WOW will be returning to the Harbison Theater at Midlands Technical College to bring this show to life for FOUR  nights only! Run  dates are Thursday July 25 – Sunday July 28, and tickets range in price from $20 – $30 (with group rates available.)

Confessions of a Good Man is an inspirational stage play that gives a glance into the mind and struggles of one man. The production tells the tale of three brothers who grew up in the same household, but ended up with three vastly different lives. Each of the brothers takes his own path to try and become like their father, the epitome of a good man. Although the goal seems to elude them all, each of their paths lead to the same place…home. Family secrets, lies and love both bind this family together and keeps them bound. Will a confession free or destroy them?

National Gospel recording artist Blanche McAllister-Dykes, a South Carolina native, will join cast members Kayla Baker, Dana Bufford, Deon Generette, Rod Lorick, Regina Skeeters, and Will Young, IV.   WOW Productions’ mission is to inspire, educate, encourage and empower artists and audiences to make communities more conscious and compassionate places. WOW believes in utilizing local and upcoming artists who also share the desire to utilize the performing arts in making a difference in not only their surrounding communities, but nationwide.  For more information about WOW Productions and Confessions of a Good Man please visit www.wowproduction.org or call 803.807.2969.

Town Theatre meanwhile continues its run of Tarzan the Stage Musical, based on the animated Disney film, which was in turn based on the classic novel by Edgar Rice Burroughs. 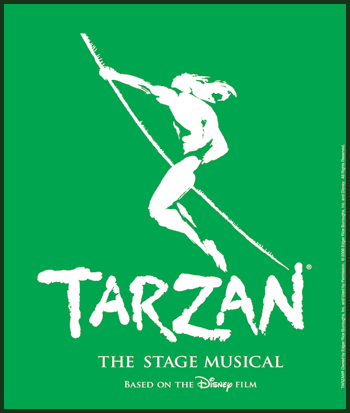 Tarzan’s adventure begins when a shipwreck leaves him orphaned on the shores of West Africa. This helpless baby is taken under the protection of a gorilla tribe and becomes part of their family. Growing into a great hunter and leader, Tarzan is much-loved by his ape mother, Kala, but yearns for acceptance from his ape father, Kerchak. When he eventually encounters his first human – Jane Porter, a curious young explorer – both of their worlds are transformed forever. Despite challenges, foes and differences, Jane and Tarzan find that together they can overcome all odds. This unlikely love story, full of adventure and songs by Grammy winner and rock icon Phil Collins promises touch your heart, while thrilling you as Tarzan literally swings over the heads of the audience and onto the stage.

Alternating in the role of Young Tarzan is Luke Melnyk (The Music Man) and Jadon Stanek (Chitty Chitty Bang Bang) with newcomer Liberty Broussard and Caroline Quinn (Annie) alternating as Young Terk. Parker Byun (Miss Saigon, The Music Man) plays the grown Tarzan, with Town newcomer Celeste Morris as his leading lady, Jane Porter. The influence of parental guidance pervades the show in ape form with Kala, portrayed by Laurel Posey (Guys & Dolls) and Kerchak, taken by Scott Stepp (Annie Get Your Gun, The Odd Couple), and in human form with Professor Porter, played by Frank Thompson (White Christmas, Harvey). And what is a Disney tale without a scoundrel or two? Creating strife from the-get go is Kristy O’Keefe (Joseph…) as the leopard and Chad Forrister (The 39 Steps) as the conniving Clayton, a nefarious hunter. On the opposite end of the mischief spectrum is the feisty adult Terk played by Jackie Rowe (Peter Pan.)

Director/Choreographer for this production is Shannon Willis Scruggs; the Scenic Designer/Technical Director is Danny Harrington; and the Costumer is Lori Stepp. Don’t miss this opportunity to see Tarzan come to life on Town’s stage, with only four shows remaining: Thursday July 25- Sunday, July 28. Curtain is at 7:30 pm, and 3 pm on the fimal Sunday matinee. Tickets are $15-25. Call the box office at 803-799-2510, or for more information visit www.towntheatre.com.

Workshop Theatre meanwhile continues its production of the family-friendly musical Doctor Dolittle , with book, music and lyrics by Leslie Bricusse, and based on the classic film.  This is a tale about the adventures of a doctor who learns to speak to animals, and who takes a journey from the small English village of Puddleby-on-the-Marsh to the far corners of the world. In the beginning, Doctor Dolittle is wrongly accused of murder and the animals and his friends rally together to prove his innocence. Once Dolittle is pronounced innocent, he continues with his search for the Great Pink Sea Snail — the oldest and wisest of the creatures on earth. This is the classic tale of kindness to animals based on the stories of Hugh Lofting.

You can read reviews by August Krickel for both Tarzan the Stage Musical and Doctor Dolittle at Onstage Columbia.