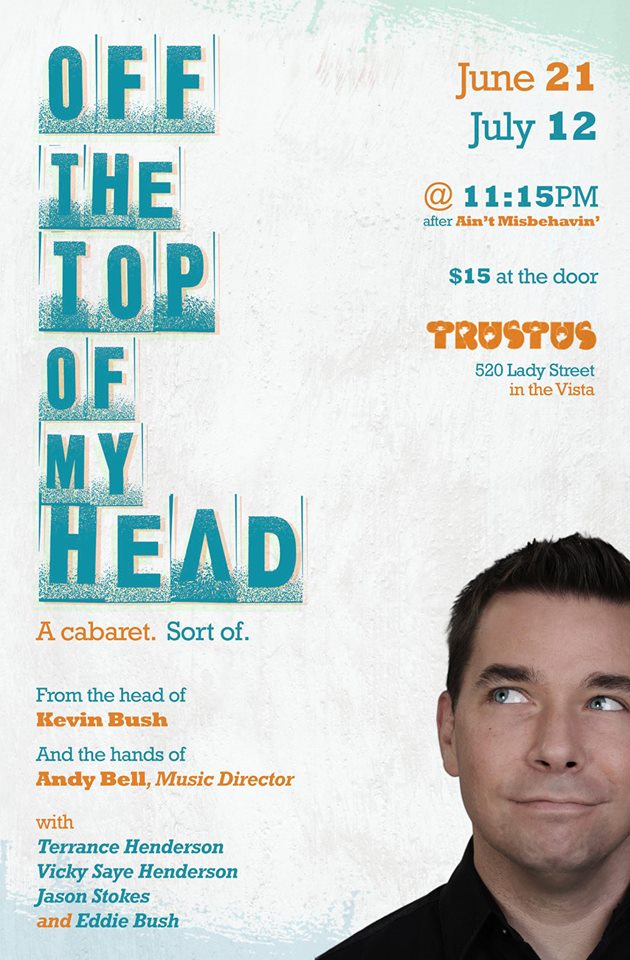 Did you miss the first showing of Off the Top of my Head? Don’t worry, you have one more chance on July 12 when the Last Call Series at Trustus ends its season. After Ain’t Misbehavin’, Kevin Bush will perform an original show with special guests Terrance Henderson, Vicky Saye Henderson, Jason Stokes, and his brother Eddie Bush. Doors open at 10:45, and the show will start at 11:15. Tickets are sold at the door for $15.

The word ‘cabaret’ was first used in 1655 as a variation of the word tavern, and taverns are where cabarets began. The sun would go down and people would head to the local tavern for a night of drinking, laughter, and music. Eventually, cabarets moved out of taverns and into strip clubs, night clubs, restaurants, and finally to the stage. In America, cabarets became popular in the roaring twenties during Prohibition, where it was a fixture, just as much as a light would be, in speakeasies. After the rising popularity of concerts, variety shows, and comedy houses in the sixties, cabaret saw a slow decline until there were very few places left in America that still did cabaret. Luckily, cabaret is starting to see a revival with new artists interpreting it in new ways.

Off the Top of my Head starts with music where cabaret left off. It pulls heavily from music of the sixties, and Kevin Bush describes it as a sort of “Great American Songbook, Volume 2.” The night will be filled with songs by Joni Mitchell, Stevie Wonder, Prince, Marvin Gaye, Freddie Mercury and Queen, Ben Folds, Stephen Sondheim and a few others. Off the Top of my Head will focus on songs that Kevin Bush finds inspirational due to their lyrics, music, or artists, and he intends to make the show, in his own words, “a sort of “mix tape” that’s intended to share the brilliance of these songs, and their songwriters, with an audience.”

This promises to be an entertaining and enjoyable evening. The resurgence of cabaret as a medium of entertainment is unique to particular areas of the United States, and Columbia, South Carolina usually wouldn’t be among that list. The chance to see a cabaret without traveling is something you don’t want to miss in the end of the Last Call season. Off the Top of my Head gives its audience a chance to hang out, have fun, and enjoy the performance art that is a cabaret show without them needing a time machine, and it’d be a shame to miss it.

Trustus Theatre is at 520 Lady Street, behind the Gervais Street Publix. For information or reservations call the box office Tuesdays through Saturdays 1-6 pm at 803-254-9732. Visit www.trustus.org for all show information and season information.

What Jasper Said is the blogging arm of Jasper – The Word on Columbia Arts, a new written-word oriented arts magazine that serves artists and arts lovers in the Columbia, SC area and its environs in four ways: Via Print Media – Jasper is a bi-monthly magazine, releasing in print six times per year in September, November, January, March, May & July, on the 15th of each month. Jasper covers the latest in theatre and dance, visual arts, literary arts, music, and film as well as arts events and happenings; Via Website – Jasper is an interactive website complete with a visual arts gallery, messages from Jasper, an arts events calendar that is updated several times daily, bite-sized stories on arts events, guest editorials, local music, dance & theatre videos, community surveys, and more; Via Blog – What Jasper Said -- you're reading this now -- is a daily blog featuring a rotating schedule of bloggers from the Jasper staff as well as guest bloggers from throughout the arts community; Via Twitter – Jasper Advises is a method of updating the arts community on arts events, as they happen, with more than a half dozen active tweeters who live, work, and play inside the arts community everyday ~ Jasper Advises keeps the arts community abreast of what not to miss, what is happening when it is happening, and where to be to experience it first hand.
View all posts by Jasper →
This entry was posted in General and tagged Eddie Bush, Jason Stokes, Kevin Bush, Off the Top of my Head, Sam Smith, Terrance Henderson, trustus, Vicky Saye Henderson. Bookmark the permalink.