So we are officially in the midst of the summer festival season, and dedicated local music lovers have probably caught various local acts populating the stages at Rosewood Crawfish Festival (which had an excellent line-up of local acts this year), Stereofly’s Rootsy Memorial Day Festival at Art Bar, the Back To Rockafella’s celebration, or West Fest. The more cultured have also stopped in on the Southeastern Piano Festival, a week of world-class piano performances which is as of this writing mostly sold-out (we recommend checking out the Arthur Fraser International Concerto Competition, where young contestants duke it out in dazzling style from morning to night. It’s this Friday, June 14, at the School of Music recital hall, and it’s free).  More festivals are on the horizon, including the wince-inducing resuscitation of the Three Rivers Festival on July 6 and 13.

Jasper loves a diversity of musical experiences, but in particular loves when Columbia gets a bit more cutting-edge. Two festivals this summer offer some of that edginess where others play it safe. 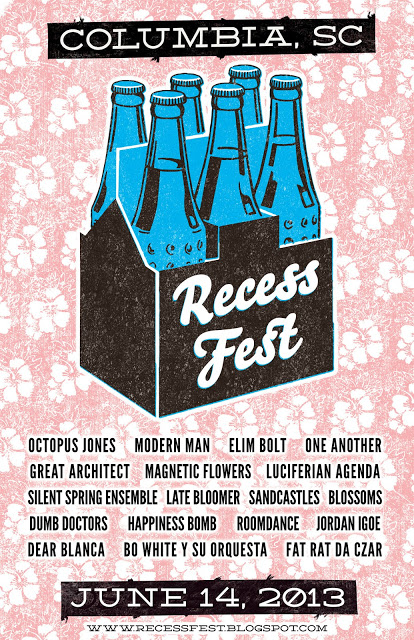 The first is Recess Fest, which is happening this Friday, June 14th, at a variety of venues across Columbia. An off-shoot of the Charlotte festival, which is celebrating its sixth anniversary this year, the festival derives its name from the carefree spirit of school recess, and champions a community-centered approach while introducing local acts from across the state. Spearheaded by people person bandleader and Can’t Kids drummer/singer Jessica Oliver, the night offers a reasonable festival-style cost for a rambunctious line-up. Here are the details:

All of the shows except for the Hunter-Gatherer one start at 7 and finish around 11, with festival-goers convening at the brewpub for an after-party with Bo White and Fat Rat (which Jasper thinks was a thoroughly excellent planning decision). The line-up demonstrates an excellent mix of bands who play the town frequently with some lesser-knowns from from the Charlotte area.

Here’s a video from Charleston favorite Elim Bolt, recorded as part of our own Fork & Spoon’s Casual Friday series, who will be playing the New Brookland stage:

The second festival we want to highlight is Spit Fest (“SP”ace “I”dea “T”apes Fest) , an annual DIY music festival on July 4th dedicated to celebrating “outsider art and culture centering around Columbia, SC.” Organized by the Space Idea Tapes record label, which does casette-only releases of bands throughout the tri-state area, the festival features off-kilter and oddball acts seldom-seen on any other big festival bill in Columbia–and fast-moving, 15 minute sets that allow for a rather expansive line-up on one stage in a single night. Now in its third year, the festival wants to be a bit more above-ground and move away from its house show origins–this  year, Conundrum Music Hall is hosting, and the festival has an Indie GoGo fundraiser which finishes up at midnight tomorrow. Check out the fundraiser site here–note the nice incentives, as well as the other logistics needs Space Idea Tapes still has. The festival will also feature a BBQ potluck and regional visual artists showcasing their work. Check out the line-up below. 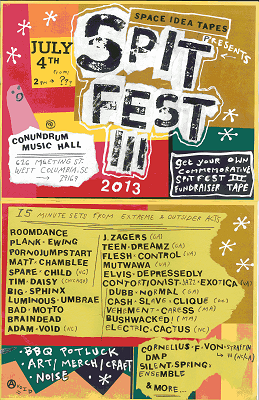 We’ll leave you with a tune from the Spit Fest-featured elvis depressedly’s lastest ep, holo pleasures, which was reviewed in the current issue of Jasper (pick one up, if you haven’t already!).