Some four years ago I reviewed a Workshop Theatre production of Caroline, or Change, and wrote “Top honors have to go to Lori Minor as Caroline’s daughter Emmie… Minor enhances and elevates each moment on stage with her irrepressible vitality and presence, and it’s not hard to imagine that we are seeing the next Miss South Carolina, or the next American Idol.”

I still think Minor could do well in one of those venues,  but the young actress and singer has taken her career in a different direction, working as a teacher’s assistant in Lexington 2 school district, and is about to make her debut as a playwright.  Her play, The Coping Mechanism, will be presented as a staged reading at the Richland Library Southeast (7421 Garners Ferry Road) at 3:00 PM on Sunday, January 20th.  Featured in the cast are Cris Griffin, Tamika Richardson, Kennedy Richardson, Kenny Hunter, and Stacy Jennings.

From press material:  “It is said that love is the glue that holds us together, but can it keep everything intact if there are missing pieces?  What does real love look like?  What would you give or give up in the name of love for your family, and when all is said and done, was it worth it?   Paul Hansen contemplates these questions daily.  After tragedy hit home for his family, they struggled to regroup and put themselves back together.  Dealing with death is never easy and the coping mechanisms we adopt are meant to help not hinder us, but the Hansens’ way of coping, they are finding out, may be hurting more than healing their wounds.”

For more information on The Coping Mechanism, see the event page on Facebook.
~ August Krickel 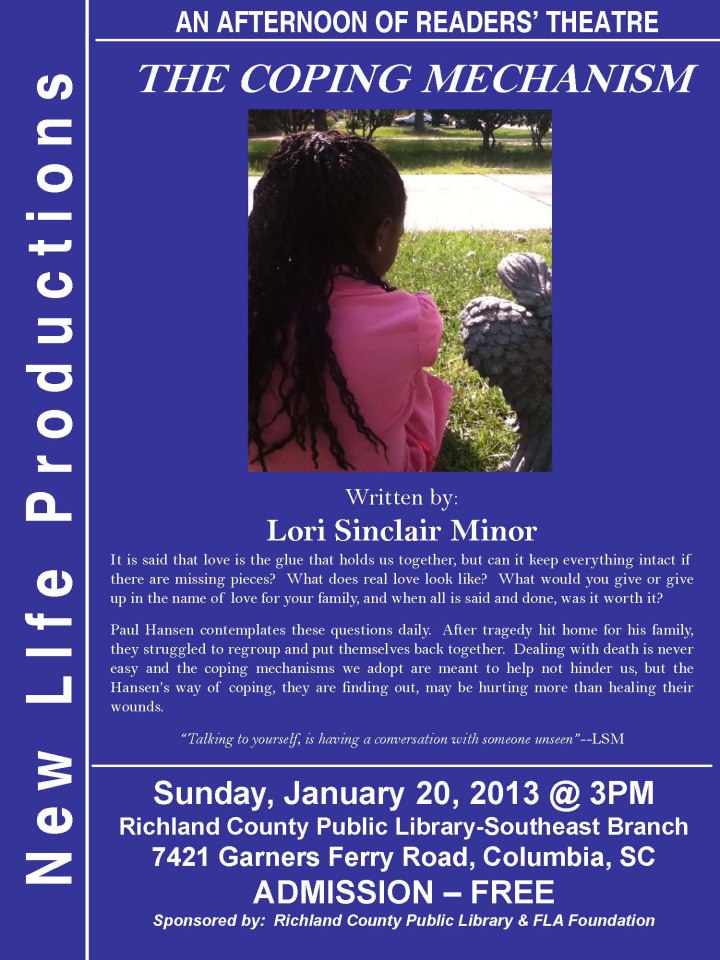