On the heels of the Columbia Marionette Theatre’s technically and visually stunning production of Hansel and Gretel comes another tale of dark forest puppetry straight from the classic fairytale canon:  Beauty and the Beast.

There is hardly a child alive—or adult for the matter—who associates this children’s fantasy with anything other than Disney’s bookworm Princess Belle and the behemoth Beast, which seems inspired from a Klingon on steroids.  About the only original concept Mickey Mouse & Co. retained in its animated film are the mid-eighteenth-century French origins of the story.  CMT artistic director Lyon Forrest Hill and writer-director John Scollon once again reclaims the forgotten origins of timeless children’s storytelling, and with a few musical numbers of their own, remind us that La Belle et la Bête is first and foremost a moral tale—not a song and dance routine with perfect pitch, jazz hands silverware. 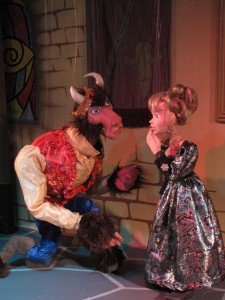 Well aware of the attention span of the average tot, Scollon perfectly condenses the tale of the selfish, spellbound prince and the selfless merchant and his daughter into a perfect hour of weekend entertainment.  On a proverbial dark and stormy night, a prince, expecting his latest noblematch.com date at the palace door, instead comes face-to-face with an old hag whom he refuses to grant shelter.  The hag reveals her magical self, and converts the nobleman into a pectoral-heavy satyr, and his footman Radcliffe into a cheese-mongering, pudgy rodent, now Ratcliffe.  In this state they will remain until the master of the estate learns a life-changing lesson about compassion.  (At this point, parents are wishing this would actually happen to most hedge fund managers.)

Meanwhile, a woebegone merchant “in a nearby neck of the woods” receives a singing telegram from a seaman informing him that his poverty has come to an end:  his ship, the S.S. Porcupine, has finally docked at port laden with foreign goods.  The merchant’s daughter, Grace, asks her father to pick out the entire Tiffany catalog on his journey to claim his fortune.  The more modest daughter, Beauty, expresses that she will be content with just a single rose.  That rose, of course, becomes the crux upon which Beauty will eventually sacrifice herself, becoming an indentured guest in her entrapped father’s place at the Beast’s enchanted castle.  Finally, the prince learns his lesson about judging others by their outward appearance, and is allowed to trade his hooves for his feet, and gets a storybook wedding ending, to boot.  (Could there possibly be a more relevant 21st-century fairytale—even for hedge fund managers?)

The production is replete with technical highlights that will delight both children and adults, including an abracadabra buffet table and vanity, a sartorial dance number with dazzling gowns, and the magical prince portrait behind which the beast both conceals and reveals himself to those who dare enter his domain, and which is a critical leitmotif children will later encounter in every 1930s horror movie and episode of Scooby-Doo.  While the beast is a truly delightful feat of puppetry monstrousness, CMT should be even more proud of its Beauty creation; she is the spitting image of a young Kim Basinger.   CMT always puts as much creative effort into designing its sets as it does its marionettes; of note are set painter Carolyn Merkel’s Osiris-eye stain glass windows and swirling blue-green forest backdrop, as well as the miniature castle model and character figurines which maintain kiddie attention spans during set changes.

Beauty and the Beast is a must-see show for parents seeking an affordable, high-quality entertainment option on weekends this spring.  The show also provides an open door for parents to teach their children “the real” fairytale classics.  And remember:  Columbia Marionette Theatre provides field trip and birthday party options for larger groups of children.  CMT is an arts community jewel and once again has earned our support.

Beauty and the Beast runs until March 16 with performances every Saturday at 11 a.m. and 3 p.m.  Tickets are $5 per person.  Children under 2 are free!  The Columbia Marionette Theatre is located at 401 Laurel Street (corner of Huger and Laurel).  Call 252.7366 for more information or to reserve party space for your little ones.  To learn more about Columbia Marionette Theatre, visit www.cmtpuppet.org .

Special note to parents:  There is something important about the soft edge of darkness and fear of marionette theatre.  Stringed puppet shows are no less a rite of childhood passage than roller coasters and midway funhouses.  But as parents, we sometimes forget that the diminutive marionettes are as large as, or larger than, the little audience members sitting segregated from adults in the first few rows.  As a suggestion, if you are bringing your little one to CMT for the first time, it would not be a bad idea to arm him or her with a little penlight or an open hand for comfort during the first few minutes.  Fret not:  your child will quickly become an audience veteran and become engrossed in the narrative.  Yet thinking about this in advance may help to avoid disturbing other children trying to follow the show closely.