Trustus Theatre has just launched their production of [title of show] , and no…that’s not a misprint.  Jeff Bowen and Hunter Bell are two nobodies in New York who have only three weeks to write a musical to enter in the inaugural New York Musical Theatre Festival.  Unable to come up with an original work (not a show based on a book or a movie), they decided to write their musical about their experience writing their musical, along with their talented friends, Susan and Heidi.

This probably sounds like one of the most trite, gimmicky, and self-aggrandizing ideas you’ve ever heard of, right?  Don’t worry, you aren’t alone in thinking this.  Jeff, Hunter, Susan, and Heidi all have their doubts and fierce insecurities about this work-in-progress about their work-in-progress, and that’s what makes this tiny show with only four chairs and a keyboard really special. 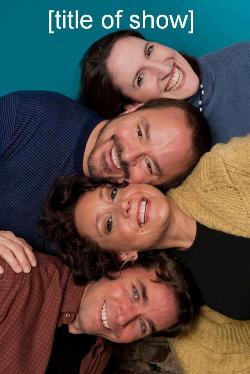 Keep in mind: this show is a true story about four friends who played themselves in show about themselves.  Director Dewey Scott-Wiley had the unenviable task of casting this show with four real people who could fully embody the characters of four other real people who custom-made a show for themselves.  I’m happy to say, she nailed it.  Kevin Bush (Jeff), Matthew DeGuire (Hunter), Robin Gottlieb (Heidi), and Laurel Posey (Susan) are all Columbia theatre veterans whom you’ve probably seen before, and they’re all absolutely terrific in this production.  Randy Moore isn’t just the Musical Director for this show;  he also plays Larry, the oft-neglected keyboard guy who doesn’t really get any lines, and doesn’t even get to be in the publicity photos (song: “Awkward Photo Shoot”).   With this group of local all-stars, it would be hard to go wrong.  It’s important for the actors in this show to have chemistry.  We need to believe they are the tight-knit group of pals they are portraying in order to care about them.  Otherwise [title of show] would be a total bore.  As you learn more about these people, you begin to feel an odd sort of comfiness.  I really felt like these were my friends, and I found myself rooting for this little show with a big heart the entire time.

The dialog starts off as being a bit too try-hard with cliché gay and sex jokes that feel forced.  As the play (and our understanding of the characters) develops, it becomes more real—and really quite funny!  The score is cute, witty, and at times truly moving.  The lighting design by Frank Kiraly makes the most of an intentionally simple set in brilliant and clever ways.

[title of show] explores the terrifying excitement of creating something new.  In the song “Change It, Don’t Change It”, our fab four begin to doubt the quality of their work and themselves.  Is their play really good enough for Broadway?  Are they good enough?  As Susan says, “Why is it that if a stranger came up to me on a subway platform and said these things, I’d think he was a mentally ill asshole… but when the vampire in my head says it, it’s the voice of reason?”

[title of show] runs on the Trustus Main Stage through December 16th, 2012. After the New Year, the show returns on January 3rd, 2013 and runs through January 12th, 2013. Main Stage shows start at 8:00pm Thursdays through Saturdays, and Sunday matinees are at 3:00pm. Tickets are $27.00 for adults, $25.00 for military and seniors, and $20.00 for students. Half-price Student Rush-Tickets are available 15 minutes prior to curtain.

Trustus Theatre is located at 520 Lady Street, behind the Gervais St. Publix. Parking is available on Lady St. and on Pulaski St. The Main Stage entrance is located on the Publix side of the building.

For more information or reservations call the box office Tuesdays through Saturdays 1-6 pm at 803-254-9732. Visit www.trustus.org for all show information and season information.