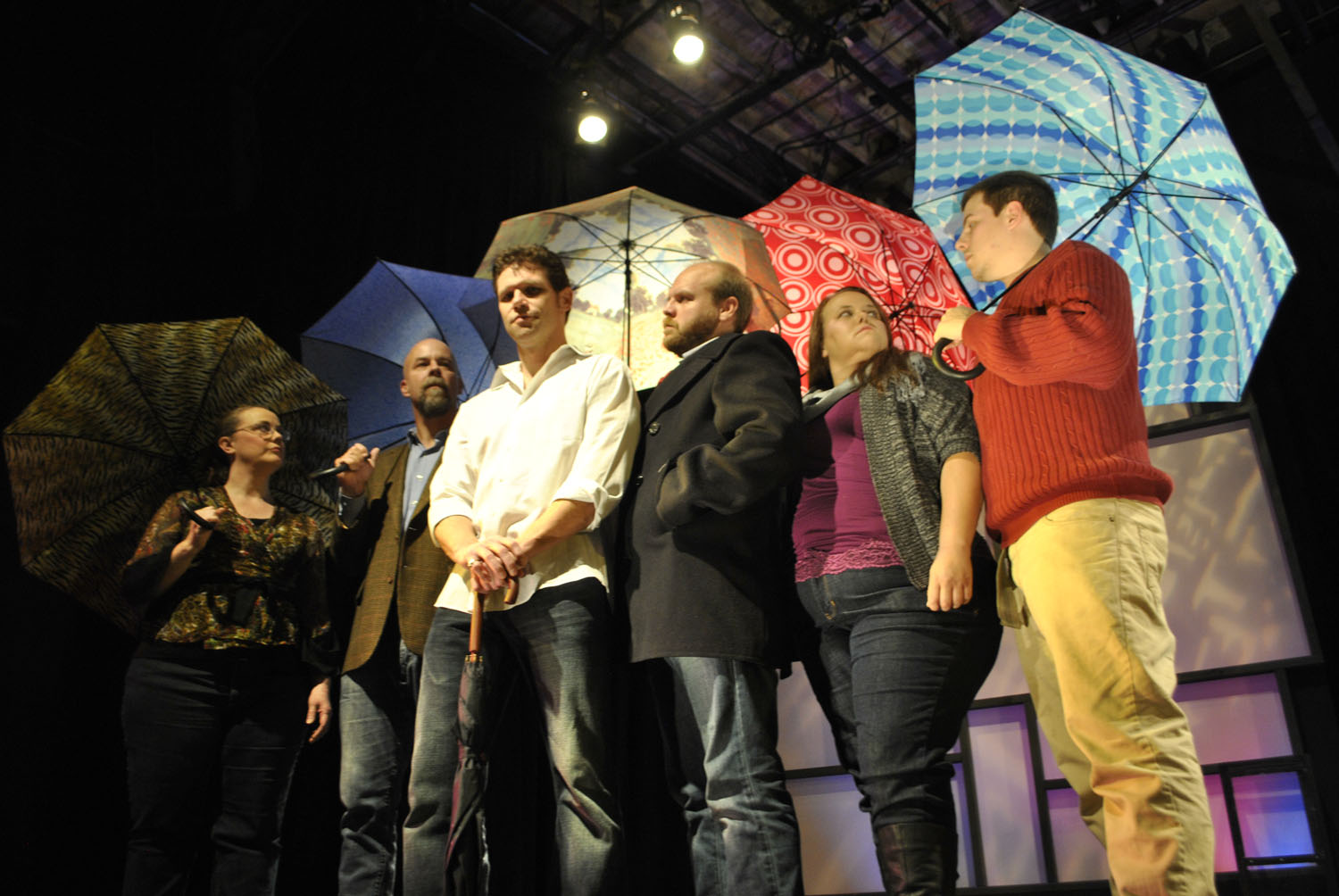 “How do you make that call?”  That’s the question asked at beginning of the second act of Next Fall, the new play opening at Trustus this weekend.  And it’s really the question that drives the play.  Everyone is on cellphones in the play.  There are missed connections, unreturned calls, emergency contacts—and the inevitable chain of calls that happens when something awful happens to someone you know.

How do you make that call?

In the play, which was written Geoffrey Nauffts and staged on Broadway in 2010, Luke, a closeted gay man, lies in a coma in a New York hospital after an automobile accident.  Hospital policy limits access to “family only.”  In the hospital are two close friends and Luke’s parents, who have just arrived from Florida and who don’t know that Luke is gay, nor that he has lived with another man for 4 years.  The arrival of Luke’s partner at the hospital sets into motion the complicated (and sometimes infuriating) interactions of these 6 characters as Luke’s situation goes from bad to worse.  Life support, organ donation, access to your loved ones at a time of illness or catastrophe—all of these issues raise the question, “How do you make that call?”  And, perhaps, more importantly, who gets to make it.

It’s a deeply moving play, all the more so, I think, because it’s a message play about issues that matter, in some way, to everyone.  We’ve all faced, or will eventually face, these questions.  But I think they’re particularly fraught for gay people, and that’s where the real drama—and heartbreak—of the play lies.

Hospital visitation is an issue that has haunted the gay community for decades.  Under the law, for years, a family who had cut you off might have more claim over your health care than the partner you had chosen.  I remember, when I was younger, hearing about the Sharon Kowalski case.  Like Luke, Kowalski had been with her partner about 4 years, though unlike Luke and Adam, she and her partner Karen Thompson had had a commitment ceremony and had named one another as insurance beneficiaries.  Also like Luke, she ended up in a hospital after an automobile accident.  A drunk driver hit her in 1983, and she suffered severe brain injuries, with permanent physical and mental disabilities.  Kowalski’s anti-gay family and her lover repeatedly went to court over her guardianship.  One court after another disagreed.  Thompson eventually won, and the raised awareness in the lesbian and gay community about durable power of attorney forms for couples.

Of course, those legal forms don’t carry much weight if the state you live in doesn’t recognize your relationship—as Janice Langbehn and Lisa Pond discovered when Pond collapsed on a family cruise in Florida with her partner and their two adopted children.  Even though Langbehn had the proper legal document, that durable health care power of attorney, the Florida hospital refused to recognize it.  As the Lambda Legal website puts it, “The hospital also informed her that she was in an antigay city and state and that she could expect to receive no information or acknowledgment as family.”  For almost eight hours, neither Langbehn nor their children were allowed to see Pond.  She died in the hospital.  To add not merely insult but cruelty to injury, the state of Florida and the Dade County Medical Examiner refused to give Langbehn a death certificate when she requested one to get life insurance and Social Security benefits for their children.

Clearly, even if you had the right piece of paper, this fundamental human right to take care of the ones you love was subject to a patchwork of hospital practice, state policy, and homophobia.  Clearly, too, despite the Full Faith and Credit clause, states could not only deny recognition of couples and families recognized elsewhere, but they could also do so, as the medical examiner’s actions suggest, in particularly cruel and inhumane ways.

I can’t help but wonder if the playwright had this case in mind, when he made Luke’s parents Floridians.

Like much of the play’s publicity, the play’s flashback scenes, within which the relationship of Adam and Luke is developed, focus on their fundamental religious differences.  Adam is an atheist or agnostic, while Luke is a devout believer of a particular sort—not only a Christian but one who believes in the Rapture (a nonmainstream theology made popular by TV evangelists and the Left Behind franchise) and one who hasn’t reconciled his sexuality with his faith.  He still thinks his homosexuality is wrong—so much so that he prays after sex, even though he’s been with Adam for years.

Understandably, that’s unsettling to Adam.  But it makes sense to Luke’s best friend Brandon, who has sex with black men but doesn’t believe in the “lifestyle.”  As he explains to Adam, “When you two were just hooking up, it was one thing, but when it turned into something, well, more . . . Look, I understand the need to act on the urges, believe me, but to choose the lifestyle? To live like it was . . . right, I guess?”  Brandon draws the line there.

Or as Adam throws it back at him, “You draw your line at love?”

Part of the power of this play for me actually lies in the representation of Luke and Brandon—perhaps uncommon figures in contemporary gay theatre but both very real kinds of gay men, not just closeted or self-loathing (those are familiar), but unable to reconcile their sexuality and their faith, and, like Brandon, so deeply conflicted that they give themselves permission to have sex (those pesky “urges”) but not permission to love.  That Luke prays after sex is just one of many coping strategies for the cognitive dissonance he and Brandon feel, trapped between two incompatible worldviews.

I am not a theatre critic, but I have to say that G. Scott Wild was excellent—compelling and human in the role of Adam.  His first few scenes felt stagey (though that was perhaps more the script than his acting), but as he got into the character—and through the entire second act—I found his character heartbreakingly believable.  Also, Kim Harne as Arlene, Adam’s mother, was a believable gem of an unstoppably chatty Southern woman, though as with Adam, the play gives her much greater depth as a character in the second act.

Part of the problem with the play, in fact, is the way the first act has to establish character and worldview in broad strokes, but the second act fills in with depth and empathy characters who seemed almost cliché in the first.  For example, Stan Gardner as Butch, Adam’s father, is an asshole and a fundamentalist Christian who doesn’t believe in evolution, uses the n-word, and makes clear what he thinks of faggots.  It’s a hard role to pull off without being a cliché, but Stan pulls it off surprisingly well, especially in the second act as his world falls apart.  Brandi Smith as Holly (the self-described fag hag and Luke’s boss) and Bobby Bloom as Brandon are also quite good—Brandi’s timing spot on, and Bloom’s doe-eyed face a canvas of masked self-torture and conflicted allegiances.  Pretty and self-assured, Jason Stokes as Luke was an enigma of a character for me, though Stokes registers the confidence of convinced Christians that can so often come across as self-righteous smugness.

I also have to say I love the way the director (Sharon Graci, Artistic Director of Pure Theatre) moves us between scenes, using musical breaks for characters to move around the simple chairs and table that create a hospital chapel, a New York loft, or a coffee shop.  Or the use of umbrellas to open each act (simple and stunning).  These were beautifully and carefully choreographed moments of music and movement.

I also liked the minimal staging, though at times the lack of props and the (sometimes not-so-well) mimed acting of drinking, opening doors, and packing a suitcase became distracting.  Perhaps it’s appropriate, though, given the play’s theme, that other than the hospital waiting room furniture, the only real props were a Bible, a bottle of pills, and a cellphone.

I love those moments in theatre when I lose my sense of being in an audience and I get lost in the story.  Those moments, in this play, when emotion overwhelmed the characters—and overwhelmed me.  Despite my problems with the first act, overall I thought the play powerful and important.  And by the end, simultaneously crushing and hopeful.

Luckily, thanks to President Barak Obama, the rules have changed about hospital visitation.  Moved, in part, by Langbehn’s horror story of anti-gay Florida and others like hers, the president signed an executive order in 2010 mandating that any hospital receiving government funding (including Medicare and Medicaid) recognize the relationships of gays and lesbians and their children.

Luckily, too, South Carolina passed a law in 2008 (in the wake of the amendment’s broad denial of rights to lesbian and gay couples), allowing one to designate hospital contacts and visitation rights.  (Gay activists kept a distance from these deliberations, for fear the knowledge that this law would allow recognition of lesbian and gay couples would derail it in the generally homophobic South Carolina legislature.)

Of course, such policies wouldn’t help someone like Luke in the play, unconscious and unable to make such designations, and too closeted (and perhaps too soon in the relationship) to have sought ratification of the relationship in a legal document.  When the surgeon stipulates “family only,” Adam protests, “I am family.”  That relationship, however, is not recognized by law or hospital policy, and with a faggot-hating, Bible-toting, creationist father in the waiting room, it’s not likely to be recognized by those who have the power to make the call either.

If Mitt Romney is elected, sadly, this play may have even more resonance.  Within the past week, Romney has announced that being able to visit your dying spouse or parent in the hospital is a privilege, not a right, and should be left to states to decide.  (See here and here.)  As others have noted, this implies that Romney would reverse Obama’s 2010 federal order requiring hospitals to recognize visitation rights of gay couples and their children.

On behalf of Romney, his spokesperson clarified:  “Governor Romney supports a federal marriage amendment to the Constitution that defines marriage as an institution between a man and a woman. Governor Romney also believes, consistent with the 10th Amendment, that it should be left to states to decide whether to grant same-sex couples certain benefits, such as hospital visitation rights and the ability to adopt children.”

Theory and practice, I guess.  Banning gay marriage is a federal issue, but it’s up to the states to put cruelty into practice.

Next fall, Next Fall might feel all too possible, given the vicissitudes of elections and the determination of the Right to turn back progress.  I hope, instead, that next fall (or maybe the one after that or the one after that…), as powerful and moving at this play is, it will seem a dated message play, that Next Fall will join Larry Kramer’s The Normal Heart as a play about a time when institutionalized denigration of gay people and the denial of their relationships was a tacit norm.

“How do you make that call?”  And who gets to make it?

Go see the play.  Make sure your gay and lesbian friends have a durable power of attorney.  And vote.

One Response to Next Fall, This Fall: A Timely Play Opens at Trustus