Is it possible to gain serenity by isolating and removing all that is evil and full of rage from our minds?  This is the question Dr. Henry Jekyll seeks to answer in Chapin Theatre Company’s production of Dr. Jekyll and Mr. Hyde.  After much experimentation and late hours in his laboratory, Jekyll creates a concoction that transforms him from his kind-natured bookish self into a raging violent monster who calls himself Mr. Hyde.  In Jeffrey Hatcher’s adaptation of the famous novella by Robert Louis Stevenson, the lines of good and evil fade to grey.  In the beginning of his experiments, Dr. Jekyll remembers his alter-ego’s activities, but gradually he begins to “black out” for days at a time; as Hyde terrorizes London with violence, depravity, and murder.  Jekyll, through the testimony of his friends and colleagues is acutely aware of the dangerous and deadly extent of Hyde’s actions, but continues with his experiments regardless.  Hyde, on the other hand, becomes a sympathetic anti-hero.   Born with a rage he can’t control, we see surprising moments of tenderness to Elizabeth, a young chambermaid who falls in love with him.  He laments being unable to lament his cruel nature, and does all he can to defend himself from Jekyll’s threats to destroy him. 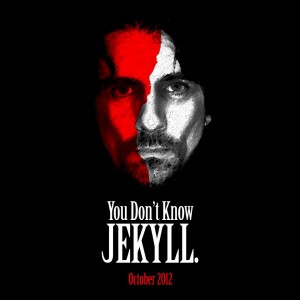 This production of what could be a deeply moving exploration into the darkest corners of man’s soul doesn’t entirely work.  I applaud a small community theatre for attempting such a difficult production, but several elements of the show came off as hokey and/or unpolished.  Some of this is due to the challenging nature of the script.  Relying heavily on an ensemble cast, most of the actors end up playing a different aspect of Mr. Hyde — a device that isn’t very effective, as it doesn’t really contribute to the story.   The constant “filling in the gaps” of the story by aside narrations and journal readings wouldn’t be so annoying if they weren’t so plentiful, often halting and killing any suspense that might have otherwise built up.  George Dinsmore’s performance of Dr. Henry Jekyll becomes much more powerful in the second half of this production, as we begin to actually see his inner turmoil and guilt for what he has done.  Nathan Dawson pulls of multiple roles, including the “main” Hyde well, although his Hyde is teeters on the edge of becoming a caricature, with a voice that is distractingly Tom Waits-ish.  The lack of erotic tension in the scenes between Hyde and Elizabeth (played by Emily Meadows) made their intense relationship seem quite unlikely.

This isn’t to say this production is without merit –  far from it.  The ensemble cast pulls off their rapidly-changing characters well,  changing their voices, postures, and mannerisms seamlessly and impressively.  Somehow a scene where one of the characters (played by David Reed) oversees an autopsy of the character he played in the previous scene doesn’t seem at all strange or out of place.  While the individually ever-rotating Mr. Hydes aren’t very effective, the scenes where they converge together to torment Dr. Jekyll are downright chilling. 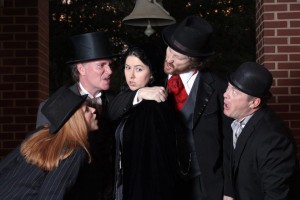 The set is stark, raw, and adaptive – perfect for this production.  The music plays a major part in creating this show’s haunting mood.  A few costume changes would have been helpful in establishing character changes, but became unnecessary, due to the strength of the cast’s ability to change so effortlessly and distinctly from role to role.

Chapin Theatre Company is making bold strides in moving away from being just another community theatre.  While they haven’t reached the caliber of other theatre companies in the Columbia area yet, they are well on their way.  Despite its flaws, Dr. Jekyll and Mr. Hyde will make a great addition to your Halloween season.

One Response to Dr. Jekyll & Mr. Hyde – a Review by Jillian Owens