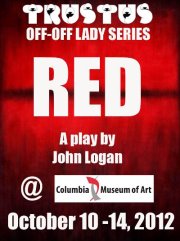 Trustus launched the first play in its Off-Off Lady Series on Wednesday night with a production of John Logan’s Red at the Columbia Museum of Art, coinciding with the Mark Rothko exhibit now on view.

It was just plain fun to arrive at the art museum and be directed around back and up a ramp to get to the captured theatre space where the play would be presented. Once in the bowels of the art museum — in rooms and hallways few of us ever enter — we were then directed to board a monstrous freight elevator where we were transported to an even more massive warehouse/storage area resembling an empty parking garage. There to the left was an elongated theatre space created via pipe and draping with a single row of chairs lining the drapery walls. Center stage, on the same level as the chairs, was created by renown design artist Christian Thee, and it, in almost every way, did an excellent job of replicating Mark Rothko’s Bowery art studio at the end of the 1950s. Barry Sparks’ lighting design, which had to have been challenging given the unusual theatre setting, lent a desired sense of staleness to the milieu indicative of Rothko’s disdain for natural light.

Red is about the period in Rothko’s life during which he was commissioned to create art for the Seagram Company’s new, and now famous, Four Seasons Restaurant. An abstract impressionist, Rothko was offered a hefty sum of money for the time, and through dialogue with his assistant, a fictional character named Ken, he addresses issues of compromise, the value of art — particularly postmodern art — and the value of intellect. The questions are provocative in the kind of way that makes the audience want to hit “pause” on the play so you can talk with one another about the merits of possible answers before continuing on with the plot.

Unfortunately, Harrison Saunders, the actor playing Rothko, made some of us want to hit “pause” on occasion to turn down the rage. It wasn’t that Saunders was unable to summon Rothko’s anger and seeming disgust at the state of arts affairs in a postmodern world — he did so well and convincingly; it was his lack of ability to modulate the irateness of the artist that felt grinding as the play wore on. While it would be unfair to compare Saunders’ performance to that of Alfred Molina who played Rothko in the Broadway play, what we do know of Molina’s performance is that it gave the character the opportunity to build from a simmering peevishness to the kind of tremoring rage required of the final scene when the artist decides against selling his art to the Four Seasons. Saunders, on the other hand, went from zero to sixty in the first act and stayed there all night.

Luckily Bobby Bloom, who played the role of Rothko’s assistant Ken, responded appropriately to the building conflict, doing a fine job of being at once Rothko’s sounding board and his punching bag, while at the same time maintaining his own agency as an artist.

Red was written by John Logan, who we know most recently from the screenplay for Hugo. Included among his earlier award-winning works are The Aviator, the Last Samurai, the Gladiator and a dozen more screenplays of note. Despite its limited run on Broadway — it opened in London in 2009 — Red won six Tonys in 2010.

Inconsistencies aside, the experience of seeing Red at the Columbia Museum of Art is something that should not be missed. Kudos to managing Director Larry Hembree, who directed this show, and artistic director Dewey Scott-Wiley for conceptualizing this experience. We’ll go see Trustus performances no matter how far off-off Lady Street we have to travel.

What Jasper Said is the blogging arm of Jasper – The Word on Columbia Arts, a new written-word oriented arts magazine that serves artists and arts lovers in the Columbia, SC area and its environs in four ways: Via Print Media – Jasper is a bi-monthly magazine, releasing in print six times per year in September, November, January, March, May & July, on the 15th of each month. Jasper covers the latest in theatre and dance, visual arts, literary arts, music, and film as well as arts events and happenings; Via Website – Jasper is an interactive website complete with a visual arts gallery, messages from Jasper, an arts events calendar that is updated several times daily, bite-sized stories on arts events, guest editorials, local music, dance & theatre videos, community surveys, and more; Via Blog – What Jasper Said -- you're reading this now -- is a daily blog featuring a rotating schedule of bloggers from the Jasper staff as well as guest bloggers from throughout the arts community; Via Twitter – Jasper Advises is a method of updating the arts community on arts events, as they happen, with more than a half dozen active tweeters who live, work, and play inside the arts community everyday ~ Jasper Advises keeps the arts community abreast of what not to miss, what is happening when it is happening, and where to be to experience it first hand.
View all posts by Jasper →
This entry was posted in General and tagged Bobby Bloom, Christian Thee, Dewey Scott-Wiley, Harrison Saunders, John LOgan, Larry Hembree, Red, trustus. Bookmark the permalink.