Dorothy Parker once reviewed a play that was so incompetent in all aspects, that she decided to leave most of her newspaper column space newspaper blank, stating that the production did not even deserve typeset words.  Nothing could be more opposite with respect to deserved accolades than Columbia Marionette Theatre’s latest production, Hansel & Gretel.  Artistic Director Lyon Hill has created something so phenomenal and unique that I was tempted to write the entire review in 100-point font.  However, recognizing that giant block letters might not be a preference for the average online reader, I will offer a single, megalithic, lexical frieze to frame my review:

TAKE EVERYONE YOU KNOW TO GO SEE IT!

As I have written in previous reviews, what I appreciate most about the CMT mission — and executive direction John Scollon should be applauded for this — is that it eschews the glamourized, Walt Disney fairytale and clings to the tried-and-true philosophy of edge-of-your-seat, Grimm storytelling.  And what better tale to present (especially in the month of hobgoblins and pumpkins) than one which seems to have been universally ignored by the animated children’s fantasy industry:  Hansel & Gretel.

My four-year-old daughter Kat plied me with questions about the story on the way to the theatre; she had never even heard the title.  The only factoid I would let slip is that there was likely to be a house made out of candy.  As one can imagine, that was enough to set her imagination’s hook.  But not even I was prepared for the sumptuousness of what CMT had prepared for patrons of all ages.

Upon crossing the dragon’s head threshold, even theatregoers who have attended multiple CMT productions will immediately realize there is something unique about this production.  A large, curved film screen covers center stage, and there is something oddly cartoon-esque about the set.  This was intentional; director Hill drew expertly on the classic black-and-white animation of the Fleischer Brothers (Betty Boop, Popeye, Koko the Clown) as inspiration for his set and marionette characters.  This is especially telling in the rounded qualities of the puppet faces, and in their oblong eyes; in fact, I’m not sure I’ve ever seen marionettes which seemed so eerily alive.

Hansel and Gretel deep in the forest

The show begins with an immediate departure from the traditional Hansel & Gretel tale.  Both the poor woodcutter and his wife absolutely adore their children.  The reason for this welcome twist may be that Hill wrote the story as a special dedication to his young son, Oliver.  A dreaded wood filled with ghosts and boy-eating witches is one thing, but no child should have to endure the added torture of an abusive stepmother.  Yet despite being the candied apples of their parent’s eyes, there’s only so much roasted boot a la tongue any child can endure.  Following Hansel’s retelling of ‘The Tale of the Three Thieves’ — in which the stage is expanded with computer animation, and puppeteers Cooper Hill, Payton Frawley and Lyon Hill enthrall the audience with precisely-timed shadow puppetry — audience members soon find themselves in familiar territory:  at play in the field of the pastry-bread home with strawberry shortcake shutters.

A reviewer really could wax on and on about this spectacular production.  Like the professional marionette stages in Prague, this is a show that adults without children would thoroughly enjoy.  And I truly hope that other marionette professionals around the region and nation take the opportunity to travel to Columbia to witness what is without a doubt the crowning work to date by Lyon Hill and CMT’s very talented crew.  The production also boasts an incredible original score in the vein of a Woody Allen soundtrack by David Drazin, as well as the aforementioned original animation by Wade Sellers and Jeffrey Shroyer, and the vocal talents of local actors Kevin Bush and Jenny Mae Hill. 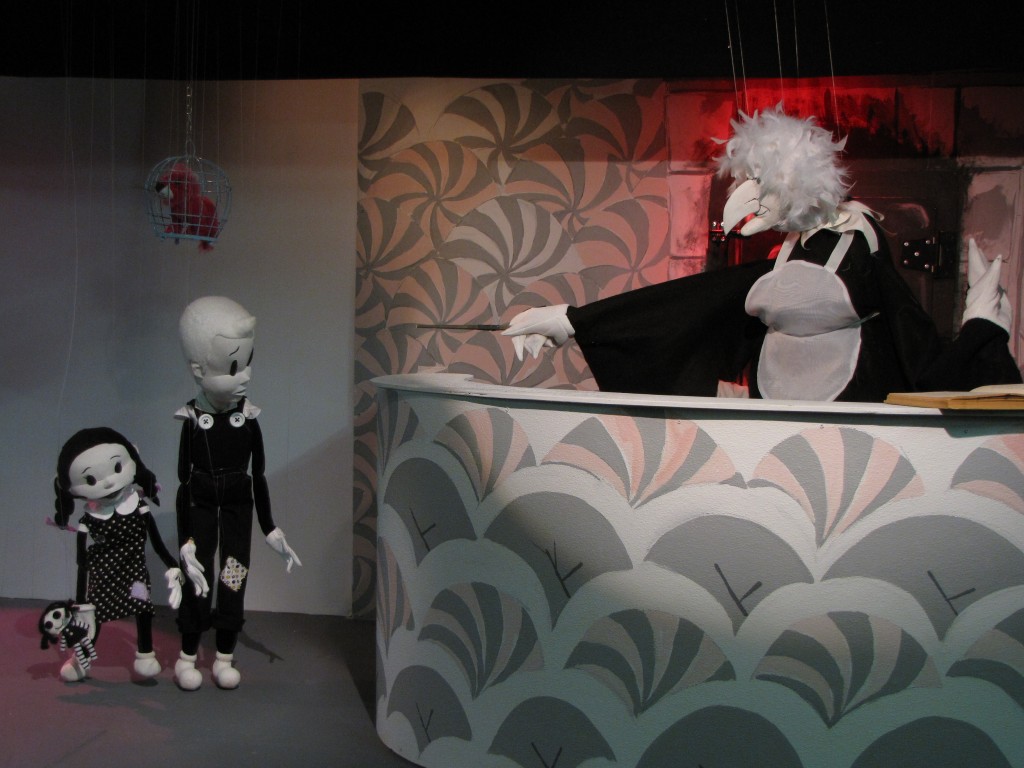 My personal favorite puppet moment was the skeleton whose bones magically dislocate and reassemble during a Fred Astaire song-and-dance number.  I also loved the owl puppet set high aloft the stage as introductory narrator; I hope the owl becomes a mainstay character for future CMT productions.  (Perhaps call him Owlistair Cooke.)  Another ingenious creative choice was making the witch a haggy vulture, whose appetite for human flesh is a bit easier for children to swallow, given her carrion nature; that, and it’s a tad easier to stomach watching a bird get its just desserts by being cooked in an oven than a humanoid figure.

At one point, Hansel describes the treasure of the three thieves — upon which the brother and sister pin their hopes to save their family from poverty — as so valuable that it cannot be named.  Without a doubt, our city is home to such a valuable treasure for children’s storytelling, yet it has a name:  Columbia Marionette Theatre.  And I can only conclude in the way in which I began:  Hansel & Gretel is unlike any show CMT has ever staged; whether child or adult, you are in for an extraordinary storytelling treat.

TAKE EVERYONE YOU KNOW TO GO SEE IT!

Hansel & Gretel runs until December 29 with performances every Saturday at 11 a.m. and 3 p.m.  Tickets are $5 per person.  Children under 2 are free!  The Columbia Marionette Theatre is located at 401 Laurel Street (corner of Huger and Laurel).  Call 252.7366 for more information or to reserve party space for your little ones.  To learn more about Columbia Marionette Theatre, visit www.cmtpuppet.org .

NOTE: Tuesday Oct. 9th, from 6:00 to 8:00 PM, there will be a special event in the Hallway at 701 Whaley showcasing The Art of Hansel and Gretel by Lyon Forrest Hill. Get a glimpse inside Columbia Marionette Theatre’s production of Hansel and Gretel. This exhibit features conceptual art including sketches, character designs and prototype marionettes by Lyon Forrest Hill. Deliciously evil treats provided by Jenny Mae Hill. Details can be found at http://www.facebook.com/events/188415467960730/