Originally billed as “A Trivial Comedy for Serious People,” The Importance of Being Earnest gets a fun and funky 1960’s reboot in the new Theatre South Carolina production of Oscar Wilde’s last and best-known play.

The plot of this rollicking farce is perhaps best expressed in the line, “The truth is rarely pure, and never simple.”  John and Algernon are close pals with double lives.  John (aka Jack) avoids his somber life of responsibilities in the country by inventing a brother by the name of Ernest, whom he constantly has to visit, to rescue him from some scrape or another.  Algernon (aka Algy), on the other hand, frequently escapes to the country to avoid unwelcome social obligations, claiming to visit his imaginary (and always sickly) buddy, “Bunbury.”

This arrangement serves them both well, until John (who is living as “Ernest” in the city) falls in love with Algy’s cousin Gwendolen.  Gwendolen’s mother, Lady Bracknell, is appalled to discover Ernest/John is an orphan, found in a handbag at Victoria Station.  To escape her disapproval, Gwendolen and Ernest/John plan to elope in the country.  Little do they know, Algy overhears their plans, and decides to have a bit of his own fun.  After finding out John has a beautiful young ward by the name of Cecily at his country estate, he shows up posing as John’s rascally younger brother….”Ernest.”

Traditional Wildean wit, hilarity and clever banter ensue.  Even those who have never seen this play performed live will remember many of Wilde’s signature one-liners.  Both Gwendolyn and Cecily are determined that they can only love a man by the name of Ernest, and certainly not John or Algy!  The play is a searing commentary on the frivolity and insincerity of Victorian culture.  Wilde believed “that we should take all the trivial things of life seriously, and all the serious things of life with sincere and studied triviality.”

This production was cleverly re-set from 1895 to some time in the 1960’s with go-go dancers, a terrific retro score, a set that would be any Anglophile’s dream, and wildly flamboyant costumes.  And it works.  Director Robert Richmond is obviously aware that with a show so dialogue-heavy, a modern audience could easily get bored.  There is absolutely no opportunity for boredom in this intensely high-energy production.  The actors are constantly in movement (a benefit of this production being done in the round), and the dance numbers between scenes are expertly choreographed by Emily Gonzalez (more on her later).

I always look forward to seeing a production at USC, as their shows easily have the most consistently high production values in Columbia.  This show was no exception.  The fun and adaptive set by Kimi Maeda transforms perfectly from a swinging 60’s bachelor pad to a happy hippie garden.  The costumes are simply brilliant.  Elizabeth Coffin displays an amazing amount of talent here, especially for an undergrad.  They are wild, colorful, clever, and beautifully executed with an intense attention to detail. 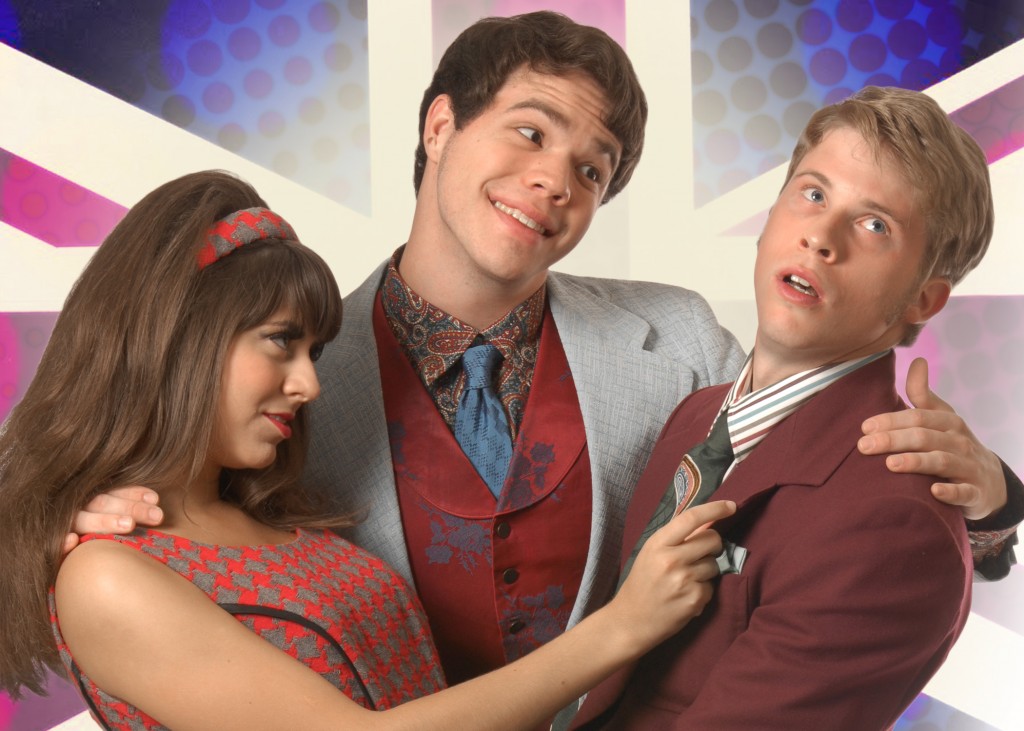 Pictured: From left, Danielle Peterson (as Gwendolen), Liam MacDougall (as Algernon) and William Vaughan (as Jack)

I was surprised to discover that the cast for this show was all undergraduates.  Usually Theatre South Carolina relies much more heavily on its graduate students.  Emily Gonzalez makes a delightfully naive Cecily Cardew, and her choreography gives this show the jolt of energy it needs to maintain the interest of a modern audience.  Rocco Thompson delivers a particularly hilarious standout performance as Lady Bracknell.  Liam Macdougall’s Algernon is funny and fey, though difficult to understand at times.  Danielle Peterson seemed a bit stiff and uncomfortable in her role as Gwendolen, almost as if she were playing the role 15 years older than it was intended.  But her spot-on sense of comedic timing more than compensates for this.  William Vaughan plays off his fellow actors well as an exuberant though put-upon John/Ernest.  All of the actors do a fine job, especially for being such a young group with varying levels of experience.

The Importance of Being Earnest makes for a delightfully witty way to spend an evening.  So go ahead…take a walk on the Wilde side.

The show runs through Sat. Oct. 13th at USC’s Longstreet Theatre.  Show times are 8 pm Wednesdays-Fridays, 7 pm Saturdays and 3 pm on the first Sunday.  There is an additional half-price late night performance on Saturday, October 13 at 11 pm.   Tickets for the production are $12 for students, $16 for USC faculty/staff, military personnel and seniors 60+, and $18 for the general public.  Tickets can be purchased by calling 803-777-2551 or by visiting the Longstreet Theatre box office, which is open Monday-Friday, 12:30 pm-5:30 pm.