A number of shows opened across the Midlands at all the major theatres within the last few weeks.  Two have held over for a week longer, while three more open on Friday night.  Here’s some info from assorted press material:

The sights and sounds of London in the “swinging sixties” set the stage for an imaginative retelling of Oscar Wilde’s beloved comedy classic, The Importance of Being Earnest, October 5-13 at the University of South Carolina’s Longstreet Theatre. 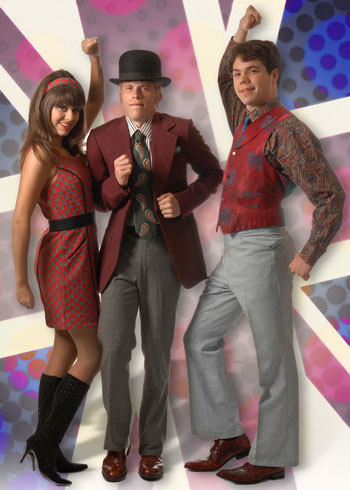 Show times are 8 PM Wednesdays-Fridays, 7 PM Saturdays and 3 PM on the first Sunday.  There is an additional half-price late night performance on Saturday, October 13 at 11 PM.   Tickets for the production are $12 for students, $16 for USC faculty/staff, military personnel and seniors 60+, and $18 for the general public.  Tickets can be purchased by calling 803-777-2551 or by visiting the Longstreet Theatre box office, which is open Monday-Friday, 12:30pm-5:30pm, beginning Friday, September 28.

The Importance of Being Earnest follows the exploits of Jack Worthing, a socialite leading two lives.  He’s the well-respected “Jack” at his country estate, where he is guardian to his adoptive father’s granddaughter, Cecily; and, in the city, he assumes the identity of an imaginary brother, the loose and freewheeling Ernest.   When his good friend Algernon discovers the deception, he decides to get in on the action, coming to Jack’s country estate as the fictional brother.   This complicates not only Jack’s designs on Algernon’s cousin Gwendolen, but Algernon’s own desire for Jack’s young ward, Cecily.  Filled with hilarious plot twists and Wilde’s singular acerbic wit, The Importance of Being Earnest is high farce at its finest!

Entertaining thousands of South Carolina audiences with no-cost cultural enrichment since 1992, South Carolina Shakespeare Company has selected Jon Jory’s staged adaptation of Jane Austen’s most famous work, Pride and Prejudice, as its season opener. A tale of love and values in class-conscious England of the late 18th century, Pride and Prejudice is a witty romance featuring the five Bennet sisters – including strong-willed Elizabeth and young Lydia – young women who have been raised by their mother with one purpose in life: finding a husband. 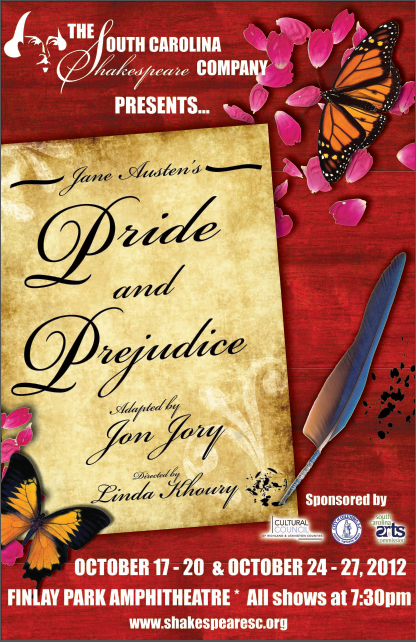 I Am My Own Wife is by playwright Doug Wright, the Obie-Award winning author of Quills. This show, which won the 2004 Pulitzer Prize for Drama, the 2004 Tony Award for Best Play, and the 2004 Drama Desk Award for Best New Play explores the astonishing true story of Charlotte von Mahlsdorf. A transvestite and celebrated antiques dealer, she successfully navigated the two most oppressive regimes of the past century -the Nazis and the Communists – while openly gay and defiantly in drag. Von Mahlsdorf was both hailed as a cultural hero and accused of colluding with the Stasi (The Ministry for State Security). The script calls for over 30 characters to be played by one actor, and Columbia is fortunate to have Paul Kaufmann stepping back into these roles for the second time. 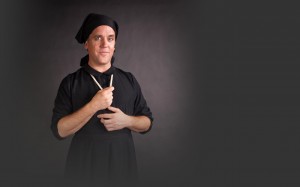 I Am My Own Wife opens Friday, October 5th at 8:00 PM, and runs through Saturday, October 20, 2012.  Shows on Thursdays, Fridays, and Saturdays start at 8 PM. The Sunday matinee on October 7th will be at 3 PM. The doors and box office open thirty minutes prior to curtain, and all Trustus Side Door tickets are $15. Reservations can be made by calling the Trustus Box Office at (803) 254-9732.  Trustus Theatre is located at 520 Lady Street, behind the Gervais St. Publix. Parking is available on Lady Street and on Pulaski Street. The Trustus Side Door Theatre entrance is through the glass doors on the Huger St. side of the building.  For more information or reservations call the box office Tuesdays through Saturdays 1-6 pm at 803-254-9732. Visit www.trustus.org for all show information and season info.

Additionally, Town Theatre is holding over its revival of Meredith Wilson’s The Music Man through Fri. Oct. 5th.  The musical follows fast-talking traveling salesman Harold Hill as he cons the people of River City, Iowa into buying instruments and uniforms for a boys’ band he vows to organize – this despite the fact he doesn’t know a trombone from a treble clef. His plans to skip town with the cash are foiled when he falls for Marian the librarian, who transforms him into a respectable citizen by curtain’s fall. Musical numbers include: “Yo Got Trouble,” “Seventy-six Trombones,” “Pick-a-little, Talk-a-little/Goodnight Ladies,” “Gary, Indiana,” and “Till There Was You.”  Contact the box office at 799-2510 or visit http://www.towntheatre.com/ for more information.

Also, Workshop Theatre is holding over Legally Blonde – The Musical through Sat. Oct. 6th. The show tells the story of Delta Nu sorority sister Elle Woods and her amazing trip through Harvard Law School in pursuit of the sexy Warner Huntington III. Along the way she meets friends Emmett and Paulette, who along with her Delta Nus help her to remain positive and see her through. Of course, we must not forget the cutest sidekick in the world, Elle’s Chihuahua, Bruiser. From fashionista to law

student, our daredevil in high heels proves that being yourself and going after what you want never goes out of style.  Read What Jasper Said about the production at http://jaspercolumbia.net/blog/?p=2104. For ticket information, call the box office at 799-6551, or visit http://www.workshoptheatre.com/.